Nobody is really anti-innovation—at least not many people, not anymore. But, as the authors of THE INNOVATION DELUSION make clear, it is not the most important element in our lives, or in the economy. 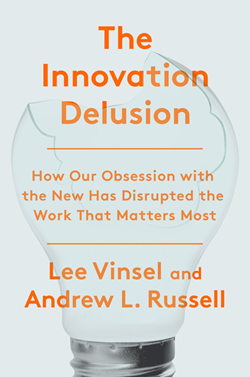 The Innovation Delusion: How Our Obsession with the New Has Disrupted the Work That Matters Most by Lee Vinsel & Andrew L. Russell, Currency

Innovation is important. Let’s begin with that. Nobody is really anti-innovation—at least not many people, not anymore. But, as the authors of The Innovation Delusion make clear, it is not the most important element in our lives, or in the economy. Maintaining the infrastructure on which our daily lives, technologies, and our society relies on, and on which innovation occurs, is of far greater importance.

You wouldn’t think that such an argument makes for an enthralling book, but it does. Lee Vinsel and Andrew Russell challenge some of the most accepted and exalted ideas in the business literature of the past few decades—creative destruction, design thinking, and so much more—and remind us that our modern lives rely more on innovations in physical infrastructure than information technology, that the technologies we use in our daily lives reside more in the material world around us than in digital consumer devices and apps. It is in our sewage systems and electrical grid, construction materials and transportation network, and in the computers and communications systems that today’s tech giants have built their empires upon.

The technologies we use in our daily lives must be maintained, of course. And our very technological civilization survives on the maintenance and care of systems rather than on individual acts of innovation. Indeed, if we see innovation not as an act of lone genius, but as a process of incremental advancement in which ideas are combined and built upon over time, maintenance and care are the only way innovation can actually occur. The author put it bluntly:

Maintenance and care are essential, yet they are regularly neglected.

As are the people who perform those tasks—essential workers. And actual innovation is something much different than the innovation-speak we hear coming from companies’ marketing departments. The innovation-speak and “innovation mindset” that emanates from Silicon Valley have done significant, real damage in the race to “move fast and break things.” It has, in fact, broken things that we once relied on—perhaps most significantly our sense of what technology is, its importance in our lives, and our sense of the work (and workers) needed to maintain it. As Vinsel and Russell see it:

At its most extreme, innovation-speak actively devalues the work of most humans, especially those who do the dirty work that keeps our technological civilization running. And … it fails to capture the essence of human life with technology—where maintenance and reliability are far more valuable than innovation and disruption.

Perhaps the problem is that, when technology works, it becomes invisible—as do those whose work keeps it functioning. The best and most important innovations become a part of the infrastructure we must maintain. How many innovations have occurred in business because of our transportation networks? The internet that the Big Tech giants of today owe their very existence to was built with government investment and maintenance—specifically, in its early years, with military contracts.

Vaccines worked so well that the diseases they fought largely disappeared, to the point that people stopped worrying about them and stopped vaccinating their children to maintain the herd immunity they were designed to create, until and even after those diseases have begun making a comeback. A vaccine for COVID-19 will likely be hailed as an innovation, but one that is safe and effective will ultimately be the result of a well-defined process of discovery and manufacturing that protects public health and individual safety. And perhaps, if we had better-funded public health agencies across the country, or had we maintained the National Security Council’s pandemic-response office instead of putting the president’s son-in-law and director of the “Office of American Innovation” on the case, we would be less reliant on finding a vaccine and our daily lives would have been disrupted less by this pandemic. But I digress. The key point the authors make is that:

In any case, innovation alone won’t take us to where we want to go. To create a prosperous society centered on human flourishing, we will need to make sure that all citizens have access to basic goods, including modern infrastructure; that the people who take care of our society are adequately compensated and cared for; and that we allocate enough resources to preserve the physical structures and wealth that we have already created, things that can become degraded and lose value and efficacy if neglected.

Perhaps it is most telling that actual innovation has declined in the era of innovation-speak. “Indeed,” the authors assert, “it is likely that innovation-speak began to reach its greatest heights just as actual innovation was tapering off.” They explain how and when technology became synonymous with progress, and why the ideal of progress gave way to an infatuation with innovation in our country during the early ‘70s. They examine what neglecting maintenance is doing to our existing infrastructure, why what’s “new” is not necessarily better, and why change does not always denote progress or innovation. The tech giants being touted for innovation today are mostly in the business of entertainment and advertising—and, of course, of surveillance. They have created massive wealth, but we don’t really rely on them as we do other technologies. I would personally fear a future in which we rely on Facebook to “connect” to our friends, or Google to access information, or Amazon for all our retail needs.

And, as they grow in size, we have either cut or deferred maintenance on existing technology systems, resulting in an “accretion of harm from incremental neglect.” That harm is both economic and human; the price we ultimately pay when we fail to maintain these systems comes due when the economic activity dependent on them slows or dies down altogether, and as people get sick from the water they drink or aging facilities they live near.

The authors suggest that:

The simple fact is that many people in the United States have never had access to  technological systems that define modern experience.As the science fiction writer William Gibson once put it, “The future is already here—it’s just not very evenly distributed.”

If the trend continues, I worry that our “Growth at All Costs” economy and focus on shareholder value will lead us to even further neglect and a situation where “the future that’s already here” looks more like Flint, Michigan than San Francisco—which I suppose isn’t looking all that great right now, either. Which brings us to this fact:

In April 2019, a federal judge in San Francisco criticized one of California’s power providers, PG&E, for paying out $4.5 billion in dividends to shareholders while neglecting routine maintenance, such as trimming trees that might pose a risk to power lines.

The apocalyptic scenes coming from San Francisco this week may not have been the result of PG&E’s negligence, but at least two of last Fall’s were. This is all without getting into what similar trends and attitudes are doing to education and healthcare, which the authors document well with both the larger picture and personal stories. What it all shows is how:

The Innovation Delusion degrades our societal infrastructure, undermines its public and private institutions, and harms our health.

But it isn’t all downhill from here. Part Three of the book, “The Maintenance Mindset,” gives examples of those championing the cause of maintenance and a culture of care. There are three principles they focus on here, that:

The examples they provide here show how maintenance is also much more compatible with sustainability—-it is, in fact, practically its very definition—even real progress. And while there is a lot of lip service paid to innovation in social change efforts, they explain how maintenance is a much better route to “safety, community, and justice,” and how it can be put to use to fight the inequality that has increased exponentially in the age of innovation-speak. Even efforts like the Green New Deal can be seen more as maintenance initiatives than innovations in addressing climate change—by living in a less throw away society, maintaining what we have built, conserving what we already have, and repairing the damage we have done. They believe in a “Fix it First” approach to infrastructure policy, and there is a lot to fix. The Innovation Delusion is, in short, about long-term thinking, and taking collective action so that we have something long term to think about.