J.J. Sutherland draws on his firm’s extensive experience to take leaders, managers, and employees deeper into the specific challenges and new opportunities of an Agile world. 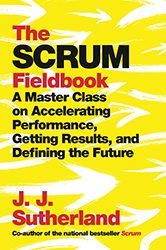 Based on years of work in the field with scored of companies including Boasch, 3M, Schlumberger, and Saab, The Scrum Fieldbook delivers a hands-on, practical approach for successfully implementing the Scrum framework in any domain.

Scrum is the secret weapon behind some of today's most successful companies. Its use has exploded across the corporate world far beyond its software and technology roots. J.J. Sutherland and the team at Scrum Inc. have dramatically improved performance at global banks, utilities, medical device manufacturers, mining conglomerates, and labs on the cutting edge of genetic science.

In the excerpt below, Sutherland shares the story of Confirmation.com, and the difference between being busy and getting things done.

Confirmation.com is a company created to solve a problem that wasted thousands of hours and millions of trees each year. They took a manual process that was slow and painful and hard and made it electronic, fast, and easy.

What they do is confirm financial data through a huge global network of accounting firms, financial institutions, law firms, and corporations. They think it should be easy to find the truth. And they realize that financial fraud isn’t going away, which is why the motto of their founder, Brian Fox, is that they help the good guys catch the bad guys.

Let me give you just one illustrative example. The founder and chairman of Peregrine Financial Group, Russell Wassendorf Sr., defrauded investors out of more than $200 million over a period of years. How did he do it? A little Photoshop and he was able to create real-­looking bank statements. The whole thing came tumbling down when Peregrine was forced to begin using Confirmation.­com. Within days the fraud became clear. And Wassendorf still has decades left in jail for his crimes.

For more than a hundred years, the confirmation process was done on paper. An auditor would send confirmation requests by mail to a bank: Does the institution being audited actually have this much money? The bank would receive not only this request but thousands of others—­even hundreds of thousands—­each year. Banks had to have whole groups of people deal with it. Each confirmation request needed to be responded to by manually checking the bank records, writing a letter that confirmed the institution had that much money, and sending it back by mail. Paper. Lots and lots of paper. It took weeks for each and every one of the many, many tens of thousands of these requests made each year.

Confirmation.com made all this happen in a matter of moments. When someone makes a request, Confirmation.com directs that request to one of the thousands of connected banks in its network, gets the response, and passes it back to the auditor. The amount of security needed to move all that sensitive financial data around is critical. And that was the hard part in the beginning: getting financial institutions, accounting firms, law firms, and their mutual clients to trust the Confirmation.com system.

Confirmation.com pioneered the idea of electronic confirmations almost twenty years ago—­receiving seven patents along the way—­and is still dominant in the space by a large margin. It started with one bank and one accounting firm in Nashville, Tennessee, and now sixteen thousand accounting firms, four thousand banks, and five thousand law firms in 160 countries use their platform. They confirm more than a trillion dollars of assets each year.

When the company started back in 2000, at first it was just four people, literally in a garage, cranking out their product, this new thing that had never been done before, which Brian envisioned and wrote up as his entrepreneurship paper in business school. Eventually big banks started to realize the amount of work they would save and the speed they would gain, and ultimately said they would only accept requests through Confirmation.com’s platform—­no more paper. Confirmation.com grew rapidly, and they started to add new features and new confirmation types—­like legal confirmations—­to their platform.

But then something happened. They weren’t getting things done quickly enough. They were missing deadlines.

The code quality a platform like theirs requires wasn’t there. They certainly weren’t going to risk that, so they took more time to try to get it right. Oh, they had people working hard. They were busy. One executive there told us he had to keep everyone busy. Hopefully they’d get something done, but if they didn’t, he could at least say he tried. But they were simply unable to get stuff out the door. Everyone was busy, but not much was getting done. So they called us.

This is a fairly typical issue in corporations. Some project—­it doesn’t matter what it is—­must get done. Management or sales or somebody has said it’s a top priority. Then someone else says something else is also a top priority. And someone else brings in yet another. And, of course, none of these people insisting that their priority is what everyone should focus on talk to one another. They just keep shoving them down on the teams. This is horrifyingly commonplace. Then, with the predictability of gravity, things stop getting done. So management starts putting pressure on the team. They want them to be busy all the time working on the many, many things that are all top priority. They make them work nights and weekends to meet an arbitrary deadline that they promised to someone. And they are mystified when it doesn’t happen.

Facts Can Be Stubborn Things

Priority is an old word. It began its life in the late fourteenth century when the French borrowed a Latin word to indicate the state of being earlier—­this event happened before that event. It entered English in the early fifteenth century, referring to precedence in right or rank. (Incidentally, it’s a singular word. Saying something is a “top priority” is redundant. It’s using two words to say one thing. Another linguistic tid-bit: Latin words aren’t pluralized by putting an s on the end, so the word priorities is actually nonsensical. It quite literally does not make any sense. It’s like saying there were five first-­place finishers in a race.)

If you run a Google Ngram search (that’s where Google looks at however many thousands of books over the past few hundred years and counts how often words are used) on priorities, you get the following result:

Priorities wasn’t even a word until about 1940. I’m not dead certain about causation, but there is a certain correlation between the rise of the modern management movement of postwar in­dustry and the birth of a new word that sounds seemingly logical and rigorous while actually being meaningless. That seems telling to me.

When Scrum Inc. goes into a company to assess how Agile they are, we usually find that about 30 percent of the work being done should not be done at all. That work is actually in opposition to goals of the business. Stop that. The Standish Group data says, and this is what we find, that 64 percent of the remaining 70 percent are working on features that the customer rarely or never uses. That means 75 percent of people in a company are either actively working against the business interests or are working on things that no one wants. Let that sink in for a second. Three-­quarters of your company shouldn’t be doing what they are doing.

The reason for this is that people refuse, or don’t know how, to prioritize. (Another quick linguistic factoid: Apparently prioritize wasn’t a word until it was first made up by government bureaucrats in the 1950s and popularized in the presidential campaign of 1972 when political operatives had to choose which voting districts to target. As the Oxford English Dictionary put it in 1982, it is “a word that at present sits uneasily in the language.” It apparently sits uneasily in people’s practices as well.)

Here are the symptoms we see. If you hear or utter any of these phrases, you might want to rethink your approach:

“We have multiple conflicting priorities.”

“Our teams are constantly disrupted by new priorities.”

“Everything is the number one priority.”

The thing that kills me is that everyone knows these are bad things. Not a single person I have ever spoken to thinks that working on five things at once and disrupting even that work for new urgent things is a good idea. No one. We all know it’s stupid. But we all do it anyway.

At Confirmation.com, everyone had different priorities. Sales wanted a better Japanese translation so they could sell there, marketing wanted to rebrand the website, and the leadership was concerned with an upstart competitor. So what should the product teams focus on? “I’m always waiting to hear what the new rules are today,” one executive told Avi Schneier, Scrum Inc.’s principal on the case. When Avi asked what the company’s number one priority was, he was told, “Meeting deadlines.” Not what needed to be done, notice, just the deadline itself.

So Avi had them work through the company’s real priorities. What are they? What is the most important thing? He helped them see that without choosing those priorities, they ended up with a company adrift, going in a different direction each day. So they made those choices. It can be done, but it requires honest reflection and some tough decisions.

Excerpted from The Scrum Fieldbook: A Master Class on Accelerating Performance, Getting Results, and Defining the Future.
Published by Currency, an imprint of Penguin Random House.
Copyright 2019 by J.J. Sutherland and Scrum Inc.
All rights reserved.

J.J. Sutherland is the CEO of Scrum Inc., a consulting and training firm that uses Scrum to rapidly deliver results in companies across the globe. He is the coauthor of Scrum: The Art of Doing Twice the Work in Half the Time, written with his father, Jeff Sutherland, the co-creator of Scrum. Previously, he was an award-winning Correspondent, Producer, and Baghdad Bureau Chief for NPR. He covered the wars in Iraq and Afghanistan, the Arab Spring, and the aftermath of the 2011 tsunami in Japan. He has won Dupont, Peabody, Edward R. Murrow, and Lowell Thomas awards for his work. J.J. lives in Washington, DC, with his family. 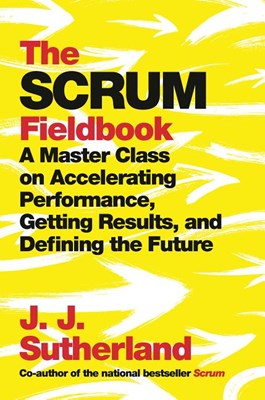