Organizational Sabotage: How to Spot It, and How to Stop It

"Someone is sabotaging your organization. Not deliberately. But that doesn't matter. The damage that this person is causing is just as bad, and maybe even worse, than it would be if he or she planned it. Day by day, operating under the radar, this person is undermining the work of your company. In effect, he or she is putting sand in your machine. And if you don't identify and redirect that person's destructive behavior (and eliminate its cause), your company's gears may suddenly grind to a halt." 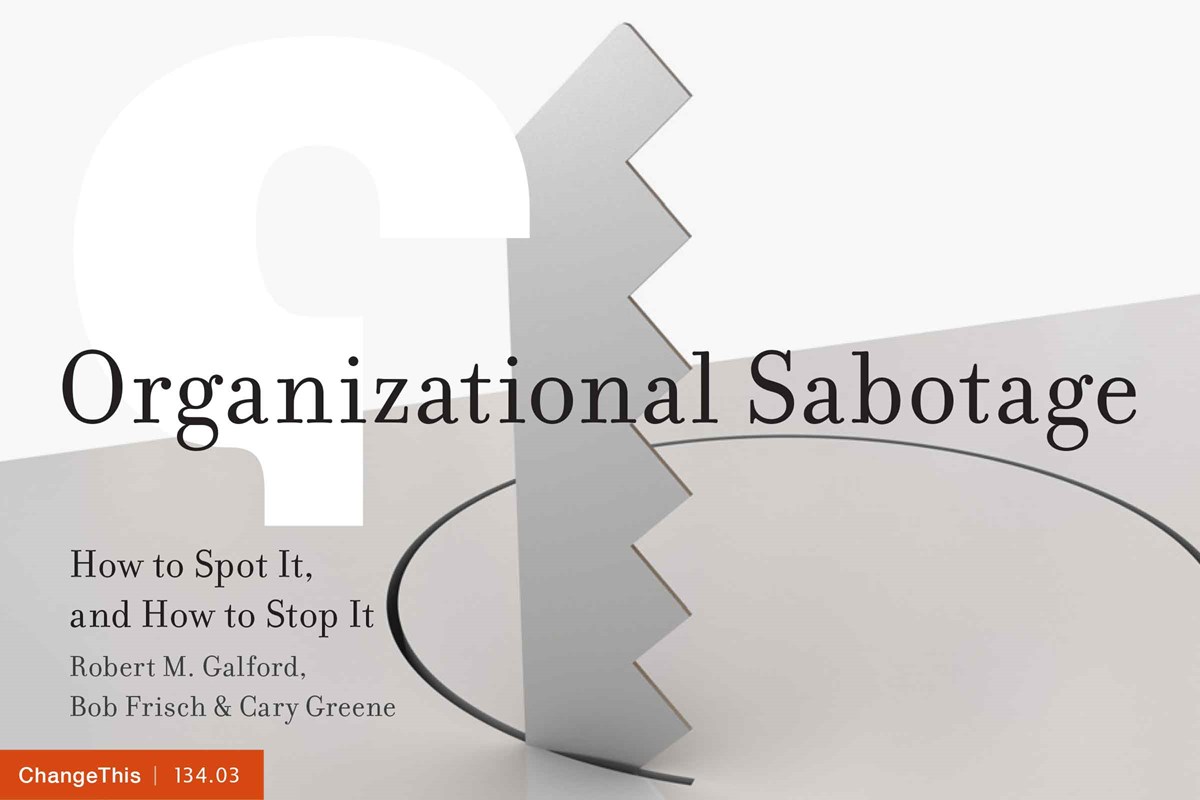 Someone is sabotaging your organization.

Not deliberately. But that doesn’t matter. The damage that this person is causing is just as bad, and maybe even worse, than it would be if he or she planned it. Day by day, operating under the radar, this person is undermining the work of your company. In effect, he or she is putting sand in your machine. And if you
don’t identify and redirect that person’s destructive behavior (and eliminate its cause), your company’s gears may suddenly grind to a halt. The problem is, organizational saboteurs are hard to spot. That’s because in any sort of work-group setting, sabotage—particularly inadvertent, or “innocent” sabotage—almost always comes in the form of good behavior that has been taken just a little bit too far. These people aren’t going to be slashing tires in the parking lot. They’re going to be doing something like… obeying the rules.

Take the employee who won’t budge on a contract because he isn’t supposed to without the approval of his manager (who is unavailable for the next 24 hours). He stands his ground because that’s what he’s supposed to do—and loses a valuable, long-term client to a competitor. Obeying the rules even when someone’s best personal judgment tells them not to can cause a lot of damage. It’s sabotage, plain and simple.

We’ve been studying inadvertent organizational sabotage for a long time now, but we didn’t label it “sabotage” until we discovered a manual written by the OSS—the predecessor of the CIA— during World War II. (We just called it something like “organizational inefficiency.”) When we started reading the OSS manual, though, we saw that one section was devoted to teaching undercover Allied agents how to commit acts of organizational sabotage behind enemy lines. “Insist on doing everything through channels”—or, essentially, Obey the Rules—is the first act on the list. That was when we realized that “sabotage” was exactly the right word.

The manual, now declassified, is worth a read. Most of the organizational sabotage tactics the OSS identified (like “Insist on doing everything through channels”) are highly relevant today. “When possible, refer all matters to Committees,” is another from that same manual. So is “Refer back to matters decided upon at the last meeting.” We’ve all seen these kinds of sabotage at work in our own organizations; we’ve seen how they slow things down.

These people aren’t going to be slashing tires in the parking lot. They’re going to be doing something like… obeying the rules.

But if the OSS experts had been brainstorming sabotage tactics today, their list of organizational moves would have been longer. That’s why we’re writing this manifesto, now, for this space. We think that there are a few types of inadvertent sabotage—byproducts of today’s technologies and common modern organizational structures and behaviors— that have the potential to bring a lot of good places down. We also believe that with a healthy level of paranoia about inadvertent sabotage tactics, business leaders—all leaders—can identify them, stop them, and even prevent them.

We are going to talk about three types of sabotage that the OSS didn’t think of—either because the technology just wasn’t there, the organizational forms didn’t exist, or the behaviors weren’t norms. Left undiscovered and untreated, they all have the potential to do serious damage to our organizations

Obeying the rules even when someone’s best personal judgment tells them not to can cause a lot of damage. “ It’s sabotage, plain and simple.

Don’t leave people out of your email trail who are even peripherally involved with the topic in the subject line. This advice sounds solid. If we’re not over-communicating, we’re not communicating enough, right?

CC’ing doesn’t improve communication. It takes the sender off the hook, and collectively implicates everyone on the receiving end in responsibility for whatever decisions, actions or information sit, unread, in the ongoing clutter of a busy e-mail inbox.

And unfortunately, “CC Sabotage” is a mainstay of modern work life. Inadvertent saboteurs in working groups of every size, cc and bcc to their hearts content, clogging people’s emails and slowing the group’s decisions making process, and—perhaps more dangerous—going about their business confident in their assumption that their colleagues or boss are “informed” and would speak up if they were not on board with whatever they’re doing.  We have to spot it, kill it, and prevent it. We have to look first at our own screens and take ourselves off of distribution lists we don’t need to be on. Then we have to ask other people to do the same. When we’re starting a new conversation with someone over email, we have to be sure it’s important, and we have to give people notice, in the subject line, if we need them to respond, and when. We have to change our subject lines; we have to stop the 20-message email trail that has the subject heading “Holiday Weekend Schedule” but has in fact morphed into a budget discussion. Finally, if something is really important, we have to pick up the phone, or use Skype. Or go down the hall and see the person we need to see in person, if that’s possible.  And ask others to do the same.

We’ve all heard that “When you want help getting something done, ask the busiest person you know.” Well, it’s true, most of the time. Busy people are generally highly organized people; they’re also the people most likely to say yes to extra work—or to volunteer before you even ask. The problem is that in today’s organizations, there are so many opportunities for being involved. Never mind extra work associated with someone’s job, or a team project that’s underway. Today, there are task forces, recruiting activities, mentoring programs, charitable initiatives, and more.  Still, people who go above and beyond their roles to participate or volunteer in these tasks exhibit exceptional collaboration skills: they are team players, they are engaged in their jobs and their organizations, and display great camaraderie. Until… they stretch themselves too thin, get swamped, and start to underperform. Even the smartest smartphone can’t create more hours in the day, and when our best helpers are out of time, something isn’t going to get done.

The only antidote to this kind of sabotage is learning to say “No,” and making it OK for everyone else in our organizations to say “No,” too. We need to push the message that it’s in everyone’s best interest if people don’t take on too much, and that they should be upfront about the time it takes to complete a task, participate on a committee, or do anything else they’ve agreed to do.

The only antidote to this kind of sabotage is learning to say “No,” and making it OK for everyone else in our organizations to say “No,” too. We need to push the message that it’s in everyone’s best interest if people don’t take on too much … “

3 | Trust that Accountability is in the Matrix.

Time was, most of the world’s organizations followed the same simple structure—one that had been around since the time of Moses. A boss (or a Pharaoh) had a number of direct reports. They, in turn, had their own direct reports. And so on, until the cascading boss/subordinate relationships took the form of an ever-expanding pyramid.

Most problems were resolved at a low level; some problems escalated up the chain of command. Resources and control flowed down in a smooth, direct manner. It was effective and efficient, and most importantly, accountability was easy to find and manage. The people at the top of the organization could easily identify who had responsibility for which parts of getting a job done. Performance expectations were easier to set, and rewards and punishments were easier to deliver. When organizational structures were relatively uncomplicated, the pyramid worked well. But as they grew in complexity (for example, as domestic businesses went global and/or diversified), it became more challenging for information to move smoothly up and down and more difficult for top managers to “see” what was going on many layers below, much less convey relevant insights and make informed decisions.

Enter American consultant and professor Jay Galbraith, who in 1971 introduced a construct— the Matrix Organization—to “cure” the shortcomings of the pyramid. It was one of the 20th century’s greatest gifts to the inadvertent organizational saboteur.

Take a good-sized company with a matrix structure, where some managers oversee functions, and others managers oversee groups of people from different functions. Some relationships will be formal; others not so much. The mixture of solid line-, dotted line-, and influence-based relationships means that accountability will be hard to place. There is an illusion of accountability, but really, what you’ve got is a fertile ground for saboteurs.

The matrix will allow people who aren’t inclined to take responsibility to commit sabotage by avoid responsibility almost indefinitely, delaying processes and projects. Sabotage will also occur when a member of one group answers to the wrong boss at the wrong time. In a matrix, a person can commit sabotage against one group by doing the right thing by another group. We’re not knocking the matrix, but if it’s going to work well, we have to be proactive about attacking Matrix Sabotage at the source.

We have to create explicit paths and time expectations for issue resolution and for immediate escalation and resolution for the thornier issues where the path is not clear. If a situation isn’t resolved in the allotted period of time, we need to push the people involved to move to the next level of escalation. We need to understand the give and take—and the stress—that is inevitable when you’re giving people accountability for something without necessarily giving them authority to make decisions.

We also need to get rid of dual solid lines, and give people a first-call ‘boss’ relationship along with one or more secondary relationships so that they know where priorities are. And we need to link actions and requests to greater goals. We need to demonstrate how specific actions tie into strategies and objectives beyond the immediate request. Doing that will help people prioritize.

If people don’t look for organizational sabotage, they’re not going to spot it. But none of us have to go to extremes. (We don’t need big brother to help us out—even in this world of apps that can track every last little measure at work that we could possibly dream of and more). We just need an anti-sabotage mindset, and a healthy dose of vigilance.
We can do this.