Why CEOs and Boards Need to Be Fearless

"The role of board member compels one to be diligent as a fiduciary. What is often not well understood is that while the role of fiduciary is necessary, it is not entirely sufficient. Board members also need to be champions of, and networkers for, the organizations they serve. And, particularly in a world where change is accelerating and disruption is becoming the norm, board members also need to step up and challenge the organizations they care so much about—and the same goes for CEOs." 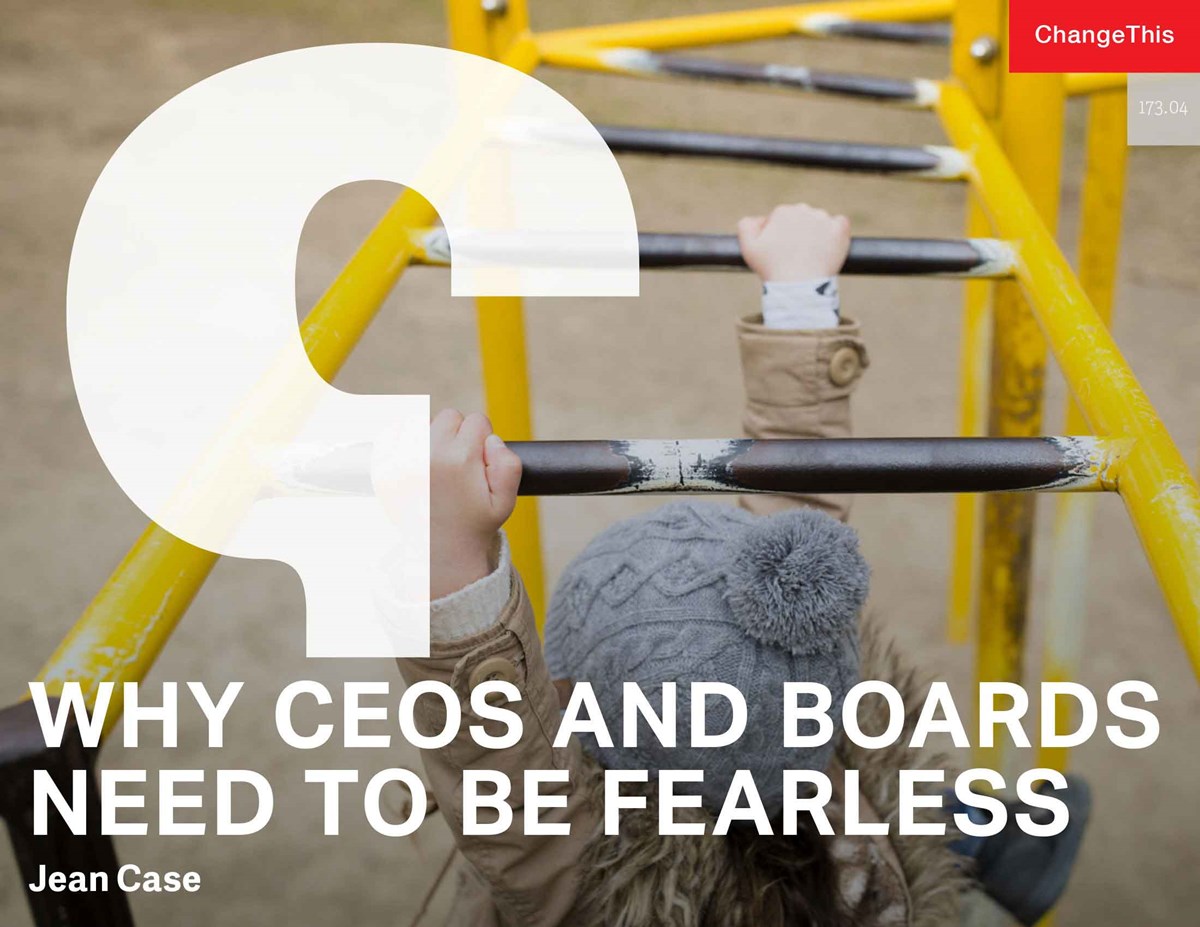 But if these problems seem too big and complex— easier to ignore than to even attempt to solve—know that there has never been a better time to engage. An explosion of technological innovation is transforming the way we live. And if we’re going to keep up with the rapid pace of change, we need to rethink the old ways of doing things.

What does that mean for those of us in the business world—specifically those who lead them?

Over the years, I’ve had the great privilege of serving on a wide range of boards—from early stage startup companies to large, established entities—and have observed firsthand the variety of hats board members can wear. The role of board member compels one to be diligent as a fiduciary. What is often not well understood is that while the role of fiduciary is necessary, it is not entirely sufficient. Board members also need to be champions of, and networkers for, the organizations they serve. And, particularly in a world where change is accelerating and disruption is becoming the norm, board members also need to step up and challenge the organizations they care so much about—and the same goes for CEOs.

Drop into the average board meeting as an observer and you’ll be quick to spot the helpful board member offering up valuable insights or supportive compliments. What might be harder to spot is the “fearless challenger” in the mix. And this is for a good reason: quite commonly, board members view their role predominantly as “protectors” of the organization. For some, this mandate is a call to exercise an abundance of caution and focus on risk mitigation—in essence, do what they can to be sure bad things don’t happen. But the reality is that today’s board members and CEOs have to go even further—challenging the organization to take measured risks and to constantly adapt to a changing environment.

We live in a world where the pace of change is unprecedented. It’s not just the old organizations that have to reinvent their ways of doing business to keep pace. A look at the younger generation of highly successful organizations such as Google, Apple and Amazon reveal how these companies routinely adapt their structures, their practices and even their workforce to stay relevant and ensure they are well poised for the future, ready to seize new market opportunities as they emerge. Or, as Bob Iger, CEO of the Walt Disney Company has said, “If you want to thrive in a disrupted world, you have be incredibly adept at not standing still.”

Yet, when I work with CEOs and boards of traditional organizations, I can see board members squirm in their chairs if I ask a question about their appetite for risk taking. It doesn’t come naturally to run toward risk, and yet in science, medicine and technology we understand the important role of measured risk-taking in trying new things, in innovating. So what if you substituted the term “research and development” for “risk-taking”? Could boards or CEOs begin to embrace the idea that new, unproven things will be tried, perhaps moving the perception of risk from a potentially reckless act to an intentional and often incremental process?

Indeed, while it is appropriate for any fiduciary to consider risk mitigation for an organization, it is equally important to consider the risk of not taking the risk. Through time there have been many examples of organizations we can learn from that missed the mark on this front. Shouldn’t Kodak have brought us Instagram? Shouldn’t Blockbuster have brought us Netflix? Instead, they were utterly disrupted by these upstarts. These companies didn’t have their heads in the sand—they were aware of the upstart challenges—but they didn’t organize and prioritize to meet the challenge. They were taking what they thought was the safe route, and it turned out to be the risky route. They were stuck playing defense when they needed to play offense and take some risks.

So, how to we instill the idea of risk-taking in our CEOs and among board members? How can these ideas be put into practice?

Sometimes taking “a toe in the water” approach is the best way to get comfortable with the idea of experimenting in new ways. In my work with more risk-averse organizations, I often suggest they think about making a limited investment or testing out a limited number of new ideas. In this way, risk stops being scary and becomes R&D.

Talk to CEOs who have embraced this thinking and they will be quick to point out that R&D is the lifeblood of innovative companies. Yes, some things will fail as you discover what works and what doesn’t. But as Einstein reportedly said, “You never fail until you stop trying.” This is true whether you’re starting a company, developing a product, or moving to new markets. And for those who fear they don’t have a budget to enable R&D approaches, I would remind them of the words of one of our greatest modern-day innovators, Steve Jobs: “Innovation has nothing to do with how many R&D dollars you have. When Apple came up with the Mac, IBM was spending at least one hundred times more on R&D. It’s not about money. It’s about the people you have, how you’re led and how much you get it.”

“While it is appropriate for any fiduciary to consider risk mitigation for an organization, it is equally important to consider the risk of not taking the risk.”

And we live in a time when testing a plan or product quickly and with limited resources can be done faster than ever. You can put your concept in front of the market and start absorbing market signals before there is a real product, and in some cases before a company is even formed.

In his celebrated book The Lean Startup, Eric Ries highlights the story of Zappos, the highly successful online shoe seller who brings this ethos of low-cost testing to life. When Zappos founder Nick Swinmurn had the idea for the company, people told him that buying shoes online was crazy, because you have to try them on. But Swinmurn wasn’t convinced. He went to retailers and asked if he could take pictures of their shoes and put them online. Then he built a one-page site with the pictures and included a way for people to order them. When somebody ordered shoes, Swinmurn would go buy them and ship them off. He obviously couldn’t do this for long, but he did it long enough to learn where the challenges would be and what customers wanted. Then he launched his company. There are many examples like Zappos of building improvement measures into the design process and inviting customers to take part in innovation.

In this way, risk becomes R&D, and opportunities flourish.

CEOs and their boards no longer can afford to stand still in a fast-changing world if they are looking to stay ahead of the curve, maximize growth and opportunity, and adapt to a changing marketplace. They must embrace the “secret sauce” of the companies and individuals who have achieved transformational breakthroughs—by being bold and taking risks. In short, they need to Be Fearless.

“What they thought was the safe route … turned out to be the risky route.”

1 | Make a big bet. So many people and organizations are naturally cautious. They look at what seemed to work in the past and try to do more of it, leading to only incremental advances. Every truly history-making transformation has occurred when people have decided to go for revolutionary change.

2 | Be bold, take risks. Have the guts to try new, unproven things and the rigor to continue experimenting. Risk-taking is not a blind leap off a cliff but a lengthy process of trial and error. And it doesn’t end with the launch of a product or the start of a movement. You need to be willing to risk the next big idea, even if it means upsetting your own status quo.

3 | Make failure matter. Great achievers view failure as a necessary part of advancing toward success. No one seeks it out, but if you’re trying new things, the outcome is by definition uncertain. When failure happens, great innovators make the setback matter, applying the lessons learned and sharing them with others.

4 | Reach beyond your bubble. Our society is in thrall to the myth of the lone genius. But innovation happens at intersections. Often the most original solutions come from engaging with people with diverse experiences to forge new and unexpected partnerships.

5 | Let urgency conquer fear. Don’t overthink and overanalyze. It’s natural to want to study a problem from all angles, but getting caught up in questions like “What if we’re wrong?” and “What if there is a better way?” can leave you paralyzed with fear. Allow the compelling need to act to outweigh all doubts and setbacks.

Taken together, these principles form a road map for effective change-making for people from all walks of life, but it’s important to note that they aren’t “rules.” They don’t always work in tandem or sequentially, and none is more important than another. Think of them as a set of markers that can help identify when decisions are being made fearlessly.

Whether you’re working at a start-up, finding yourself at a personal crossroads, working as part of an established organization, or looking for inspiration to make a life-altering change, the Be Fearless principles can provide guidance on how to take that next step. And the moment to do so is now.