Laurie Segall has a lot of stories to tell, but this one is her own, incredibly written, and it is riveting. 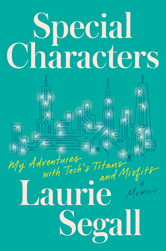 Laurie Segall has a lot of stories to tell.

One of her first was of a gentleman in his eighties, a track coach who could no longer run the track himself, a man the kids laughed at. But as the managing editor of the student newspaper in high school, Laurie Segall decided to sit down with him for her “corner stories” series. It turned out that he had fought in World War II, he spoke movingly of his love for his wife, and he opened up about being diagnosed with Parkinson’s disease and understanding that he was nearing the end of his life. He cried there sitting on the mats in the corner of the gym that day, and Segall shares that “His words were the most meaningful thing anyone had ever said to me.”

It was the first interview Laurie Segall conducted where a light bulb went off in her head, and she was hooked.

With her brother away at boarding school, with her parents' marriage having ended in a bitter divorce that she felt the pain of acutely, and as a Jewish girl in a conservative Episcopal high school in Atlanta, she had found a place where she felt at home. She had, in fact, created it. And she would continue doing so.

She matriculated to the University of Michigan, where she continued pursuing journalism and landed a summer internship for CNN International.

The more I became engulfed in stories, the more I knew I wanted to make them my career.

Ironically, the woman who would become CNN’s senior technology correspondent scored one of her earliest professional successes using a pay phone. She had showed up early at the Bernie Madoff trial to hold a seat in the courtroom for a more seasoned journalist and noticed she could hear the proceedings from a pay phone just outside the courtroom (where no phones were allowed) and used it to call in the verdict so that CNN would be the first news outlet to break the news. It is a demonstration of the savvy, ambition, and initiative she would use repeatedly as she created a place for herself at CNN.

Segall used her understanding of technology to find the deleted social media account of the Boston Marathon bomber and confirm with a friend of his that it was him, giving a fuller picture of the young man who had committed a horrendous act that had captured the attention of the nation. She found the family of Ariel Castro, a Cleveland man who had kidnapped and held three women hostage in his basement for a decade, on Facebook, made a connection with his daughter Angie, and was able to get an interview with her while other national new outlets were camped outside her door.

I didn’t want to leave her story behind once I’d left her home. I hadn’t worked for many years in the newsroom, but I’d met reporters and producers who were jaded, who walked away untouched by the intensity of the orbits they’d entered. A part of me understood why. It was self-preservation. It was a method of coping. It was how you learned to keep moving forward as you witnessed real pain and horror, but I didn’t want to be numb. I always wanted to remember the flicker of pain in Angie’s eyes when she spoke to me about the worst day of her life.

Like she had with Coach Red, the track coach she interviewed for her high school newspaper, she was able to make real human connections with her interviewees, gaining their trust as someone who would share their story authentically, rather than letting others inaccurately define them. In doing all this, she helped pioneer a new way of sourcing news, using emerging technologies. At the same time, she was getting to know the people who were building those technologies and telling their stories.

A fascinating parallel is the fact that her first internationally published story was filed for Glamour about a purity pledge ball—where young girls pledge their virginity to their fathers until they are married—that she crashed with her father when she was 21, while one of her first big features for CNN was crashing a swingers’ party for a special on the polyamorous and swinger lifestyle of tech titans and workers in Silicon Valley. She tells us how the Glamour piece was completely rewritten by editors in a way that it no longer represented her authentic voice or perspective, and how horrified she was by the experience. The piece for CNN is also clearly counter to her own sensibilities (and my own, which makes reading about both cringey), but I was actually less creeped out by it than the purity pledge ball. While I have no interest in tracking down the final piece Glamour ran, I would love to read her original draft. And, while the peccadillos of Silicon Valley’s elite will very likely be the piece of the book others are focused on and interested in, I have absolutely zero interest in finding that story.

In fact, this is not a book I expected to be drawn to overall. Although I’ve covered many books about emerging technology over the years, I have little real interest in the topic. For all the many famous and successful people in these pages, people who have changed our world, I find myself identify most with Coach Red. But I do love good journalism and good stories, and the individuals and companies that have brought those technologies into our lives are some of the most important stories of our age. Laurie Segall has covered that beat as well as anybody, and I think Special Characters ranks among Emily Chang’s Brotopia and Sarah Lacy’s A Uterus Is a Feature, Not a Bug as one of the best on that beat.

There is not a lot of talk about work/life balance in the book—just work, life, and a search for balance, for what she defines as her Boardwalk (you’ll understand the reference quickly if you pick up the book, and completely if you finish it). Her career story alone is incredibly interesting and informative. It is not one of climbing the corporate ladder as much as it is one of carving one’s own path. She didn’t rise through the regular ranks of CNN, but created something new, writing her own job descriptions along the way rather than fitting ones that were readily available. Her story is far from over; She launched her own company, Dot Dot Dot, just before the pandemic hit. But I am glad she decided to share the story of her life up until this point. It is a great reminder that, even in tech, our basic humanity is what is most important.

Laurie Segall has a lot of stories to tell, but this one is her own, incredibly written, and it is riveting.