We the Possibility: Harnessing Public Entrepreneurship to Solve Our Most Urgent Problems

America was founded upon an idea of what might be possible, not what was—that we can bring about a society that honors the human dignity inherent in us all and extends opportunity to those who’ve been denied it in the past. To that end, Mitchell Weiss reminds us, "We get the government we invent." 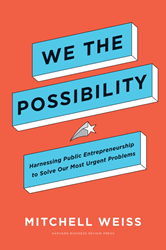 We the Possibility: Harnessing Public Entrepreneurship to Solve Our Most Urgent Problems by Mitchell Weiss, Harvard Business Review Press

Winston Churchill once opined before the House of Commons that “No one pretends that democracy is perfect or all-wise. Indeed it has been said that democracy is the worst form of Government except for all those other forms that have been tried from time to time.” He uttered those words just two years after he led his country to victory in a second world war that preserved their own democracy.

So, if democracy could ever be called a “bad” idea, then perhaps we need more bad ideas. Stay with me for a second so I can bring in Mitchell Weiss, former chief of staff to Boston's Mayor Thomas Menino and current Professor of Management Practice and the Richard L. Menschel Faculty Fellow at Harvard Business School. He writes in his new book, We the Possibility, that, indeed:

One of the books that has had a profound impact on my thinking in the last few years is Silicon States by Lucie Greene. It is an exploration of how, in an era of declining belief in the ability of government, Big Tech has been attempting to step into the role our government and civil services have traditionally played in our lives, often with some success, and with what I find to be terrifying implications. Some of those concerns are echoed in Weiss’s book, but also tempered by the ways in which cooperation can occur and how careers can become less a self-enriching revolving door between the two sectors and more beneficial for all citizens that all sectors of our society are meant to serve. On the former point, Weiss believes that as Amazon Web Services becomes the “de facto operating system of government” due to how many local governments and government agencies are under contract with the service:

It is time we relearn the techniques of government as a platform and past time we raise the scrutiny on platforms as government.

On the other latter point, I hope you’ll forgive me another digression into what may be the favorite piece of one of my favorite books—Hidden America: From Coal Miners to Cowboys, an Extraordinary Exploration of the Unseen People Who Make This Country Work by Jean Marie Laskas. That book ends with a story of workers at the Puentes Hills Landfill in Los Angeles, and how the methane gas it releases is captured in pipes that is then turned into electricity to power tens of thousands of homes in the surrounding communities. It was an innovation made possible by attracting some of the best and brightest minds in science to work in public service with the funds provided when Richard Nixon created the Environmental Protection Agency. It is the kind of forward thinking investment and invention we so desperately need today to not only allow talented people to work in and between government service and the private sector, but also attract them to it. The creation of the EPA turned sanitation engineer into environmental engineers. What similar possibilities can we open up today? As Weiss writes:

With the many crises we face, now is the time to focus on what might be. Among the many other trips Weiss takes into the field (including his own experience providing assistance to families after the Boston Marathon bombing), Weiss tags along with Jimmy Chen, a LinkedIn and Facebook alumni who turned his focus toward solving public problems by applying design thinking’s human-centered approach to government in service of its citizens by making it easier for people to sign up for SNAP benefits. So now, instead of long lines, there's an app for that. It’s become a running joke to say “there’s an app for that,” and the fact that we’re trying to solve too many problems with the same digital tools may be a problem, but it doesn't mean we should cease trying, or that digital tools aren't a powerful piece in the overall toolkit. Regardless of the tools employed, it isn’t really about designing for people, but with the people you’re designing for. He highlights inclusive design principles and notes that examples of “user-driven innovation” date back to Adam Smith’s Wealth of Nations. He discusses the work of Janette Sadik-Khan, who pioneered the idea of “desire lines” to reprogram urban planning around how people naturally move on “paths created by human usage” rather than on the grids designed for them.

Weiss tells a story of St. Paul’s mayor, Melvin Carter, and how he ended late fees at the city's libraries and unfroze 42,000 library cards in the process.

And after a few months they had 43,000 materials checked out on those cards.

The suggestion came from a front-line employee who worked directly with the public affected by a draconian policy most had not thought to question, and resulted in circulation numbers the mayor says “redefined” the library system, and was “akin to if we had opened a new branch.” And in a sense, they did—an olive branch to those in the community whose circumstances make it more difficult to get to the library and more difficult to pay off fines incurred if they don’t make it back on time. In other words, the very people who public libraries were created to serve, along with public education and so many other public innovations that America’s system of self-government has made possible.

America was founded upon an idea of what might be possible, not what was. It has progressed over the years on that possibility, not what is—on the idea that we can bring about a society that honors the human dignity inherent in us all and extend opportunity and justice to those who’ve been denied it in the past. Weiss reminds us:

We get the government we invent.

Weiss’s new book is about possibility, about iteration and experimentation, entrepreneurship and taking a certain amount of risk. And it is about allowing, even encouraging, those things in government. There has been a decades-long stated desire among many to see our government run more like a business, to end “wasteful” spending and streamline services. What is missing in that desire is an understanding that even the most successful businesses spend a lot of money on projects that ultimately fail. (I am old enough to remember a “New Coke.”) What is missing is that the most successful companies experiment and innovate, invest in their people, in research and development, and constantly reevaluate how to best serve people to reinvent themselves. And that, at our best, is what we have always done as a country. Our system of self-government is itself an ongoing and unfinished experiment, one we can and should improve upon. As inaugural poet Amanda Gorman so eloquently put it:

It might not be as poetic, but We the Possibility offers many ideas for how to proceed, showing us how we can become, that we are the possibilty we’ve been waiting for. 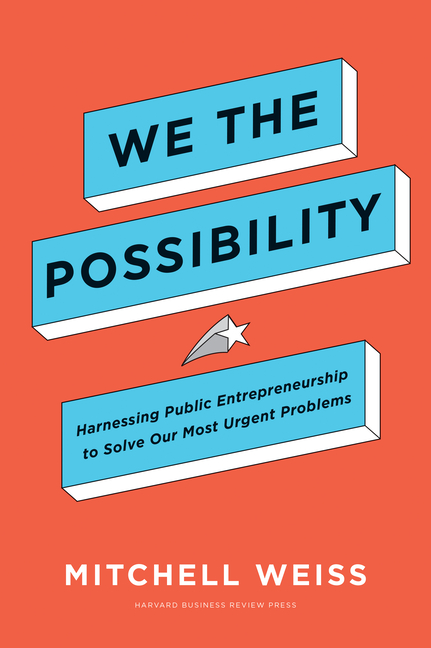 We the Possibility: Harnessing Public Entrepreneurship to Solve Our Most Urgent Problems