A World Divided: The Global Struggle for Human Rights in the Age of Nation-States

Eric D. Weitz performs what amounts to a living autopsy on the history and health of the nation-state dating back nearly two hundred years. 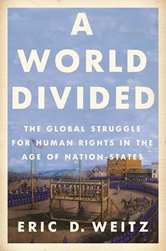 A World Divided: The Global Struggle for Human Rights in the Age of Nation-States by Eric D. Weitz, Princeton University Press

"To never simplify what is complicated or complicate what is simple. Above all, to watch." –Arundhati Roy

Right out the gate, I'm willing to admit I know very little about the National Hockey League. My interest in it? Practically non-existent. About psychology, however, I know a good deal more, owing mostly to a personal, near-clinical interest in my own. At this point, legitimate questions may have emerged: "Okay, but. Who's asking, and what's it got to do with this 500-page academic work on human rights and its relation to the rise of the modern nation-state as the predominant mode of human organization?”

To which I might say: "Well, fair enough." You're right: this isn't a review of "Canada's national pastime"— a relatively modern phrase which 250 years ago would have rung hollow on most podiums, and which today would most likely prompt heated debate as regards the "Canada" and the “pastime" in question.

It is nevertheless quite useful to call one's attention to something about which we know very little through the lens of some other thing about which we know comparatively a lot more. City College of New York historian Eric D. Weitz invites us to perform a similar sort of epistemic and empathic transference, from well-known objects to lesser-known ones. And as any historian worth their weight knows punishingly well, one must keep on reading to uncover, and eventually to apprehend, the Truth in the records, official and otherwise—without of course relying on oversimplification of the complex, and vice versa.

Mr. Weitz is fully worthy of his weight in this often-crowded class. His deftly researched and brilliantly argued A World Divided has admittedly very little to say about the sport of hockey, and although one can trace the name of William James buried in a colossal index—between Andrew Jackson and Japan!—no legitimate journal of psychology would let it past the gates (Canada, by way of curiosity, didn't even make Weitz's final cut, though no doubt has contributed handsomely both to the development and to the systematic violation of all sorts of rights). But hockey, psychology, and most the psychology of hockey may well prove apropos.

Mr. Weitz performs what amounts to a living autopsy on the history and health of the nation-state dating back nearly two hundred years. Exhaustive and meticulously dissected with a steady hand, even scalpel, a seasoned professor at New York's City College scans the body, theory, and practice of a peculiar yet increasingly society-sculpting innovation of the modern era: rights for each and every Sapien the globe over. Shoot, you don't even lose them when you visit the International Space Station, so this is kind of a big deal. The declarations announcing and enshrining said rights also went big, namely with one of its greatest hits, the Universal Declaration on Human Rights, signed and ratified by any country hoping to secure a legitimate stool at the family pub of Nations (and for IMF loans!).

Keep in mind that these were not mere suggestions of rights, but rather loud fists against the bar clamoring for an audience, praying at times for protection against hostile and murderous forces within. Weitz's seriously footnoted and highly nuanced critique of this modern struggle for human rights in the age of the nation-state has no apparent agenda to denigrate the idea of rights, nor the lofty and usually wholly inadequate attempts at enforcement by the regional and global bodies tasked with their implementation, but rather a genuine effort to call a spade a spade.

That is, there is nothing really stopping a nation-state player from taking a proverbial hockey stick to the face of another, and the sanction of the penalty box—or even being suspended from participation for a game or two, or a generation or so—does nothing to remove or help soothe the scar from the face of the assaulted party. That the game has written rules does not mean that they are not routinely violated; does not mean that those rules do not at times functionally serve as a cloak of civility in a what has historically been something quite akin to a blood sport in which the “enforcers”—with little actual finesse in the finer strategy and skill of the game, mind you—are retained for purposes of physical violence alone, in which missing teeth were once a mark of pride that you were a veteran of the sport.

Our collective need for teeth in this respect is not only a response to having had countless teeth kicked in over the last century and a half, but also, and even in the mental cafeteria of human ideas, our survival requires of us a healthy set and a solid jaw to make a meal of most anything. This game of human rights—with its lofty rhetoric and too few triumphs; its staged choreography of good behavior and the taking of "measurable steps"—means that, if you're one of the "losers" out there (think Armenians, Native Americans, Jews then Palestinians, the Rohingya or the Uighurs) your legitimate fears of persecution will likely receive little more than wrist slaps and sanctions. This, all too often, is how this particular game of hockey is being played the globe over.

Much as I drool at and admire the raw athleticism and insane discipline the Olympics flaunt and represent,  so too when it comes to the games that nations play. And unless we all manage to pull off another Miracle on Ice, it seems we stand practically zero chance at overcoming the odds and lengths of our inhumanity. In other words, either we're all in the penalty box together or we're not. And should we muster up the courage and coordination for the nearly 70 million human persons adrift in a human-made sea of statelessness, and for the scores of others internally forgotten and displaced, we’ll likely derive little pleasure if it was borne from nothing resembling a collective intent to overcome ourselves. I suppose in that sense, it would indeed be a Miracle, prolly "on Flames" though to be honest!

In true Arundhati Roy fashion, Eric D. Weitz refuses to let his mind or his pen simplify what is complicated, or to complicate what is simple. Above all else, he enjoins us to do what comes rather hard to any human when confronted with the external evidence of some primordial, though certainly surmountable, tendency towards excessive and extreme violence; a violence which we, since a few democratic revolutions back, have been dressing up in articled and pretty language.

Unfortunately, it’s not that we don't mean it when we say it, when we draft, sign, and ratify these beautiful and, in moments, gravity-defying slapshots at the crossbeams of justice and equanimity. It's just that, unless we mean it much more, and much more often, you get the sense upon finishing Mr. Weitz extraordinary read, that we can't help sometimes but to spread the sorrow and slaughter until, like a Jack Gilbert poem, it's everywhere. 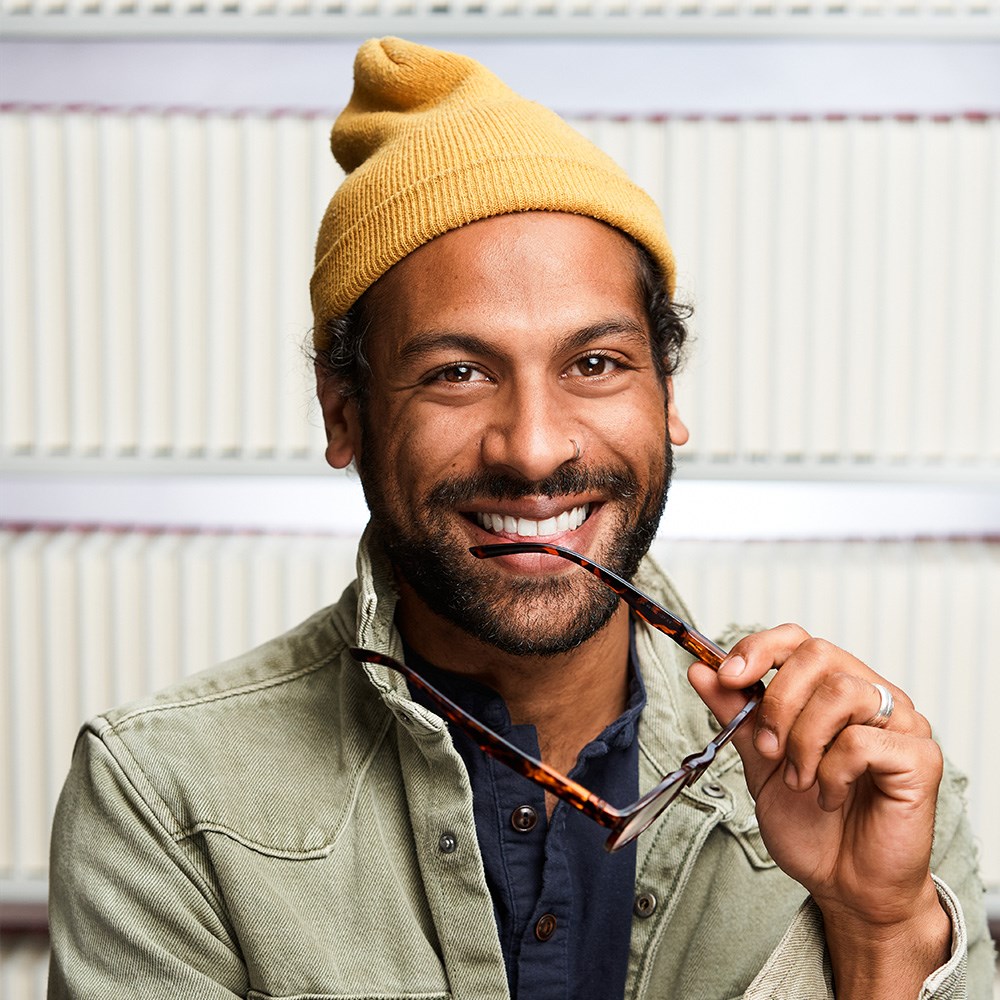 According to insiders with access, Bryan Rogers spends far too much time reading far too many books covering far too many, ultimately fruitless, subject matters. And gods only know how many he actually finishes. According to Mr. Rogers, the newest sales specialist at the Porchlight Book Company? There is no problem. Over the decades, the books read - and those left partially or totally unread - have served multiple purposes, soothed various illnesses, and cured countless bouts of self-pity and -doubt, a habit quite common among what Mr. Rogers’ wife refers to as his “Cry Baby Cancer” tendencies. So be it. There’s a book for solving that dilemma, he’s sure of it. And once he’s read it, or at least most of it, odds are you’ll find a thoughtful, well-footnoted review on this here blog page. Mr. Rogers has been to school, has been schooled, has occasionally himself schooled, and is by far and away most interested in the most general school there is: that of Life. On that count, he is currently living his with one lovely spouse, two lively children, three mostly obedient reptiles, and four...forgot what four was for. Well, there’ll be more... 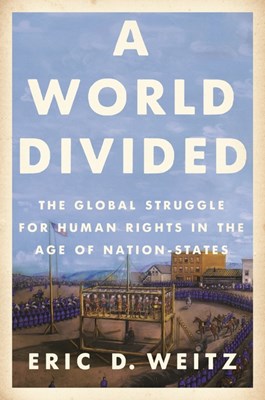 A World Divided: The Global Struggle for Human Rights in the Age of Nation-States