The rocket scientists who figured out how to break us free from Earth’s gravity and get us to the moon usually get all the glory. Earl Swift tells their story, too, but goes beyond them to tell the tale of the engineers who made the final leg of the last three missions to the moon—aboard lunar rovers—possible.

Across the Airless Wilds: The Lunar Rover and the Triumph of the Final Moon Landings by Earl Swift, Custom House

They are not as celebrated as the initial moon landing, or even the missions of those like John Glenn that laid the groundwork (or spacework?) to get there, but the final three Apollo missions to the moon remain the apex of human aviation and exploration. As Earl Swift writes in his new book, Across the Airless Wilds:

It comes to this: Remembered or not, the nine days the final three missions spent on the moon were a fitting culmination to Apollo, and a half century later remain the crowning accomplishment of America’s manned space program. 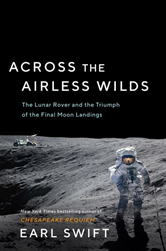 The astronauts on those missions went as far as any human being has ever ventured. The final leg of their journeys—some of the most fruitful scientifically—were aboard the lunar rovers sent along with the astronauts, whose tire tracks crisscross the moon’s surface to this day. The rocket scientists who figured out how to break us free from Earth’s gravity usually get all the glory, and receive their due here, but Across the Airless Wilds also tells the story of the engineers—and engineering, the literal ground work, as in terramechanics or study of off-road mobility—who made traversing the moon’s surface possible once the astronauts landed on those final three trips. It made a huge difference. The experiences of astronauts trying to traverse the lunar surface before they had the rovers sounds grueling; those after are practically gleeful—driving around on the moon, taking pictures, talking about what they see, collecting samples, all complete with problem-solving ingenuity when things go wrong, such as when they busted a fender on the final trip and had to come up with a repair made out of lunar maps and some duct tape.

Swift takes us behind the scenes to tell the tale of the individuals who made it all possible—engineering a vehicle that could withstand the conditions on the moon at a time when off-road vehicles on Earth were still relatively new. Their individual stories are not well known, nor is the larger story of the partnerships and organizations they had to build to make it a reality. Swift notes how:

We tend, all these decades later, to look back on the Apollo program as NASA’s doing. And certainly the agency deserves much of the credit for Apollo’s success. But not all of it. The space program was a public-private partnership well before that term became a business school cliché.

It is one of America’s greatest success stories, and like so many of them, it centers largely around the story of immigrants and their contributions. And they not only allowed us to travel further on the moon, early six-wheeled iterations of their design (the pictures in the book of the engineers driving the first examples look like they are stills from a sci-fi movie) were resurrected for the rovers we’re now sending to Mars. A terrestrial science, immigrants of different backgrounds coming together on common ground, Cold War competition, and extra-terrestrial missions. It’s an intellectual high adventure.