All the Lonely People is a heartfelt story of human friendship that will make any reader feel a little more hopeful about our divided society. 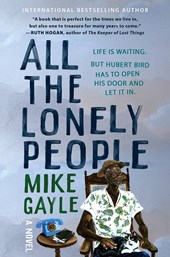 All the Lonely People by Mike Gayle, Grand Central

All the Lonely People is a fitting story to read after 2020 threw race, prejudice, politics, family, and the instability of human life into harsh relief. Chapters alternate between "Now" and "Then" timelines as we meet two halves of the main character. Present Hubert–a jaded, 84-year-old with a cat on his lap–and Past Hubert–a buoyant, young man, newly arrived and adjusting to life in London from a Jamaican village. We watch youthful Hubert fall in love and a few pages later, see the aftermath of loss. We see how racism, however subtle, in his youth pushed him to shield himself from society in his adulthood.

The highlight for Present-day Hubert is the weekly calls from his daughter in Australia, however, he'd fabricated detailed lies about his dismal social life that he now must make reality before she visits for six months, expecting to also meet his friends. In reality, he has lost touch with them, and when searching to reconnect:

"Death, disease, divorce and relocation: these, it appeared, were the four fates consuming all that remained of Hubert's generation...It was as if he'd been asleep for the past five years only to wake up in another world, in another reality where an entire generation had been wiped out and he alone was the sole survivor."

All the Lonely People is a heartfelt story of human friendship that will make any reader feel a little more hopeful about our divided society. Mike Gayle is already an internationally bestselling author, but this book is his U.S. hardcover debut. It's unfortunate when it takes so long for a skilled storyteller's work to reach Americans, but catching up on his sixteen other books will keep books-to-read lists full for a little while.