The Anthropocene Reviewed: Essays on a Human-Centered Planet

A wonder-filled survey of the world humans have inhabited and created for ourselves in which many disparate elements of the author’s personal life come together with our collective past and present. 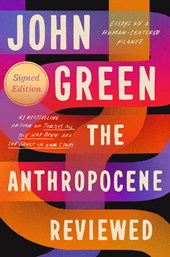 John Green is best known for his Young Adult novels about teen romance complicated by (or perhaps strengthened by) cancer, mysterious disappearance, panic attacks while kissing, and existential questions about the labyrinth of life. His latest book is a break from fiction but it is still very much a continuation of Green's exploration of the human experience in all its beautiful flaws, perspectives, and stories.

After a many-weeks-long recovery from an illness called labyrinthitis, Green decided he wanted to forego the code of fiction in favor of more directly self-reflective work. And for anyone who has seen Green's other work making friendly and informative podcasts and videos about science and history (etc.) with his brother, Hank, you won't be surprised by the unique histories that Green unpacks to better understand the present circumstances. While the world is "opening up" for us post-COVID-19-vaccine, "normal" will not be defined the same as it was pre-pandemic. And I think The Anthropocene Reviewed offers further solace that this change is good. Just as a musical theater song became the anthem for a popular football club or how Green swapped his addiction for smoking 30 or 40 cigarettes a day for a Diet Dr. Pepper every now and again, every step toward the next evolution deserves to be embraced.

It's from Green's wonder-filled perspective that so many disparate elements of our (and his) past and present come together. He grounds his writing in humanity as he clearly exercises vulnerability throughout the essays:

I'm scared to even write this down, because I worry that having confessed this fragility, you now know where to punch. I know that if I'm hit where I am earnest, I will never recover.

It can sometimes feel like loving the beauty that surrounds us is somehow disrespectful to the many horrors that also surround us. But mostly, I think I'm just scared that if I show the world my belly, it will devour me. And so I wear the armor of cynicism, and hide behind the great walls of irony, and only glimpse beauty with my back turned to it, through the Claude glass.

Green keeps the essays mostly light-hearted: balancing analytical looks at his past with humorous topics. As the title suggests, he concludes the examination of each subject with a rating of one to four stars. This element of the book isn't very interesting or fundamental to my enjoyment of the essays, but I appreciate that it raises questions about how making choices in the modern day is heavily influenced by reviews. There’s also the idea that our personal experiences will always mean more—at least that's what I thought when I read that he only gave scratch 'n' sniff stickers three and a half stars. Despite the fascinating science that Green details behind the "microencapsulation" process by which scented oils are contained in the stickers, he remains largely unimpressed by their poor representations of real-world smells. In my (sticker) book, though, scratch 'n' sniffs are a solid four stars and are tied with puffy stickers, both types which bring another, more life-like dimension to otherwise flat designs.

While Green and I may have differing opinions on the rating of stickers (as well as the Indy 500, wintry mix, and the internet), it does feel very satisfying to know we agree on many other elements of human existence like googling strangers (four stars), whispering (four stars), sunsets (five stars), and Mario Kart (four stars). Or maybe it's mostly satisfying to see that he includes some of these elements at all. In what other book have you gotten to learn about the history of the song "Auld Lang Syne" and relate to an author's incomprehensible entries to the Notes App and somehow feel more connected to the whole weird wide wistful worried world around us?

The Anthropocene Reviewed is a wonderous reminder and survey of the world humans have inhabited and created for ourselves.

You’ll want to buy this one for yourself soon, too, because John Green signed the entire first printing of 250,000 books! Also: on the days your eyes need a break, some of the essays in The Anthropocene Reviewed were adapted from Green's podcast of the same name, which you can listen to here. 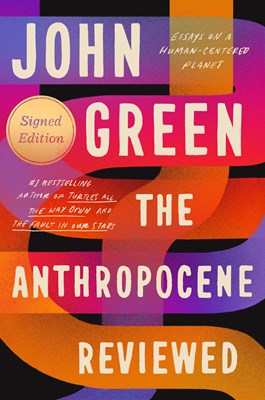