Below the Edge of Darkness: A Memoir of Exploring Light in the Deep Sea

In her new memoir, renowned marine biologist and oceanographer Edith Widder, PH. D, known for her research on bioluminescence, shares the experiences she had that lead her to become one of the leading scientists in her field. 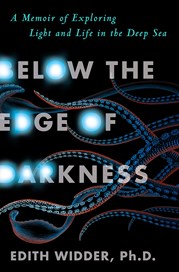 Below the Edge of Darkness: A Memoir of Exploring Light in the Deep Sea by Edith Widder, P.H. D., Random House

Collecting fireflies in mason jars is a rite of passage when we are young, watching the magical glow of their bodies, sending out a light we, as children, do not fully understand, but are mesmerized by. Bioluminescence is found in nature in many different capacities, including the darkness of the ocean that creates orchestras of light within the depths of the water. In her new memoir, renowned marine biologist and oceanographer Edith Widder, PH. D, known for her research on bioluminescence, shares the experiences she had that lead her to become one of the leading scientists in her field. She guides us through how she became enamored with the whimsical light that nature sends out to those of us that have acquired eyes throughout evolution to enjoy or stare in awe. At one time she was blinded, due to a traumatic surgery which resulted in an infection and the determination to live and work even harder to obtain her goals. Widder knows all too well the importance and the wonders of sight.

To look at the surface of the ocean without knowing the sparkling web of life that is woven through its depths is to be blind to its wonders and the part it plays in making our existence possible.

The deep-rooted science nerd within me was enthralled by every description of Widder’s research, finding bioluminescence within the dark depths of the ocean, and her research on giant squid (yes, the kraken!) which is as terrifying as it is fascinating as she recounts her experience on the sea.

For some marine biologists who have spent their careers hunting it with Ahab’s fervor, the opportunity to be the first to see the world’s most famous invertebrate in its natural habitat was the goal of a lifetime. For others, like me, it was merely a highly improbable fantasy.

It is amazing how in complete darkness light is used by these wonderful otherworldly creatures to communicate and interact with the world and shows us how much we need to protect our oceans and the creatures it holds.

Inspirational, deeply moving and with such a powerful subject and incredible life, this memoir is a call to action but shows how one woman, through setbacks that would have deterred others, hard work and perseverance became prominent in her field studying the once mysterious glowing light of the ocean.

Below the Edge of Darkness: A Memoir of Exploring Light and Life in the Deep Sea