The so-called “frictionlessness” of online life and commerce is being lubricated by us ceding our right to privacy, and it’s an increasingly slippery slope. 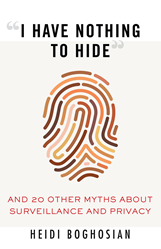 "I Have Nothing to Hide": And 20 Other Myths about Surveillance and Privacy by Heidi Boghosian, Beacon Press

“It’s 10 p.m. Do you know where your children are?” Heidi Boghosian reminds us of this popular and often parodied PSA to make a blunt point about our electronic age: “most Americans are unfit as digital parents.” That sounds a bit harsh, but the fact is that almost none of us know where our data is—at 10 p.m. or any other time of the day. We leave bread crumbs of it everywhere we go online, and those that are vacuuming it up are using it to actively undermine our privacy and personal agency by selling it to the highest bidder so they can use it in attempts to track and manipulate our behavior—and our children’s. And even if we’re not actively being manipulated:

We change how we act, according to numerous studies, when we know we’re being watched.

And, well… most of us know we are constantly being watched these days. In fact, we invite the eyes in. We are not only setting up the surveillance infrastructure ourselves, often in our own homes, we are paying monopolistic multinational corporations for the privilege. We’ve been convinced that posting photos of our kids online is a way to show we love them, and that “spying on one another is a civic duty.” The data crumbs we leave behind is the raw material that powers entire industries—increasingly affecting every industry—and those who broker it make up an estimated $200 billion industry on their own. And we are not their customers, we (our data and information) are what they are selling. The so-called “frictionlessness” of online life and commerce is being lubricated by us ceding our right to privacy, and it’s an increasingly slippery slope. So…

The public should understand how surveillance furthers the interests of those motivated by profit, and those with an interest in suppressing voices of dissent.

Boghosian suggests it’s time for a new PSA on data protection. For now, consider "I Have Nothing to Hide" to be that announcement and service to the public. It is an easy to understand guide to figuring out exactly what is happening—where our data is, how it’s being used—and how to stave off the surveillance society we live in. 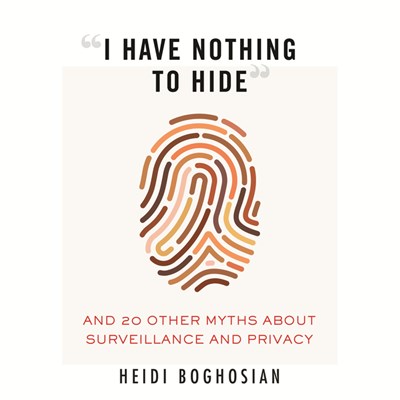