New Women in the Old West : From Settlers to Suffragists, an Untold American Story

Winifred Gallagher paints a picture of a hostile migration landscape with women—settlers who were White, Black and Asian—coming into their own, laying down the foundation for equal rights for generations to come—while uprooting the lives of Native Americans and Hispanic peoples. 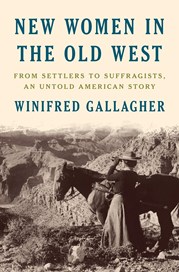 New Women in the Old West: From Settlers to Suffragists, an Untold American by Winifred Gallagher, Penguin Press

In the late 1800s and early 1900s the great migration to the West lured individuals hungry to find opportunity and experiences. Gallagher paints a picture of a hostile migration landscape with women—settlers who were White, Black and Asian—coming into their own, laying down the foundation for equal rights for generations to come—while uprooting the lives of Native Americans and Hispanic peoples. We learn about the significant women who paved the way for women’s rights in a time when their voices were hushed or silenced.

Through rough terrain and an underdeveloped landscape, families and couples realized the work of each partner was equally valued in order to survive and create a life in these uncharted territories (to the White protestants that migrated there). As couples who were once stuck in the Victorian gender roles noticed both partners' work was just as important to survive, roles began shifting and women started running their own businesses and taking on new roles. When arriving to the West, the population was mostly men who yearned for the comforts of home. This gave the sparse women of the community a chance to cook, provide amenities and launder, all while earning money for their families for the first time in their lives. Even before having equal rights, women began to build the communities of the West–creating schools, churches, community venues, and other infrastructure, pining for the communities they were forced to leave back East. This would lead to alternate careers other than the obligatory marriage for women, which was a first.

Migration increased women’s sense of competence as well as their economic status, but it also encouraged them to see themselves as patriotic pioneers—a uniquely western identity that powerfully reinforced their later claim to full citizenship.

Many women who started the movement to women’s equal rights, including the right to vote, were lost to history or barely known, as they would not be allowed to put their names on paper and sometimes men would even fully take credit for founding towns, clubs and other community binding matters.

...much like the larger history of the West, which is often dismissed as flyover country short on figures such as the founding fathers and events to match the Revolution, its women’s record of double-barreled achievement has been neglected.

As women continue to fight for our rights in modern day America, Annie Oakley, Sojourner Truth, Abigail Scott Duniway, among others, set the path by fighting for our rights in the West. These Women of the West, largely unknown to history, helped move women’s rights into the forefront which eventually gave us the full citizenship we carry with us today. 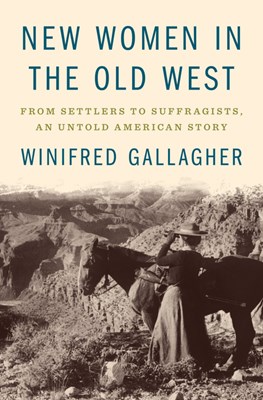 New Women in the Old West: From Settlers to Suffragists, an Untold American Story