You Sound Like a White Girl: The Case for Rejecting Assimilation

Julissa Arce has written an impassioned, well-structured, and empowering introduction to the web of issues in America that are preventing so many of its inhabitants from achieving the freedom and equality that the country advertises. 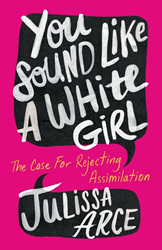 You Sound Like a White Girl: The Case for Rejecting Assimilation by Julissa Arce, Flatiron Books

Julissa Natzely Arce Raya's new book asks Americans if we are practicing the freedom and equality that we preach and consoles those alienated by the pressure to assimilate.

You Sound Like a White Girl was the perfect extension of the cultural and socio-political themes brought into conversation by the last book I reviewed, Olga Dies Dreaming. Using the vehicle of fiction, Xochitl Gonalez examined the meaning of success and finding one’s voice in society as the title character Olga and her brother re-evaluate chasing someone else’s version of the American Dream or defining a new dream for themselves and their communities.

Both Olga and Arce describe going through a period of valuing the appearance of success—speaking English, having stable and upstanding jobs, working with wealthy clients or coworkers—associating it with being acceptably integrated into American society. (Arce documents that path and much more in a previous book, My (Underground) American Dream: My True Story as an Undocumented Immigrant Who Became a Wall Street Executive.) They both discover that the security of a nice job or making attempts to distill their interests, personality, and uniqueness at the expense of their heritage held them back from happiness and self-fulfillment. They realize that fitting in will only take them so far, and that as people of color, it is furthermore futile.

Assimilation, whether linguistic, cultural, aesthetic, or otherwise, always has more steps to complete. As you master one, more appear.

Arce writes the book for herself and other Black and Brown folk who need to hear that they are worthy of being American without changing who they are to make others more comfortable. She is a robust voice that argues convincingly for pride in oneself, one's heritage, and one's countries. She relates the far-reaching histories of oppression in America and Mexico in an accessible way, and despite the book being fairly condensed, so much of those histories are not covered in standard American education, so it is a very helpful overview.

She describes many ways in which White Supremacy has affected Black and Brown people for generations, even outside of the United States. For example, how Spanish colonialism in Mexico continues to influence the country's ideas of beauty, with lighter-skinned Mexicans considered prettier and higher class than darker-skinned, Indigenous Mexicans. She also affectively describes the pressure of learning English, describing how her parents have fallen for the false promises of assimilation, how they felt obligated to spend an obscene amount of money on an English-learning program that they had no time to use because they had to work more to pay it off. And while Julissa learned fluent English through school, she was still chastised when her accent slipped in school, and when she started knowing English better than Spanish, she writes "it made me feel like I was betraying my parents, the country of Mexico, and my dead ancestors."

While her book is written in English, there are moments where the text naturally slides into Spanish phrases. And it does this without italicizing any non-English text as many American books do. This style choice emulates an America where Spanish speakers don't have to apologize or warn others of their culture. They should be able to coexist in their mosaic of accents, languages, traditions, pastimes, and skin colors without apology.

But the barriers to this aspiration are beyond personal mindset. Arce calls attention to laws and hostile media coverage across the United State that target people of color: from a World War II vet that was denied burial in 1945 because of his race to examples of how influential leaders like Ronald Reagan, Donald Trump, and Ann Coulter have broadcast stereotyped and contradicting images of people of color as lazy and welfare-hogging yet conniving laborers who steal jobs from white Americans. Arce brings up big ideas like how the “U.S. government makes our lives legal or illegal to suit the financial needs of corporations," and while she explains in a few examples why that is, I think you'll need to read more in-depth on many of the topics to understand more completely the complex and aggravating connections between capitalism and racism in America. However, I think that You Sound Like a White Girl is an impassioned, well-structured, and empowering introduction to the web of issues in America that are preventing so many of its inhabitants from achieving the freedom and equality that the country advertises.

The billionaire depends on workers remaining poor. We keep being fooled by the crumbs thrown at us without realizing there is a whole feast to be had.

Pairing U.S. and Mexican history and her own personal experience, You Sound Like a White Girl is a well-balanced self-help and history book for new generations of immigrants who lack representation in a country and world that favors whiteness. Beyond just rejecting assimilation, Arce inspires readers to unabashedly reclaim and redefine their identities. I have great hope that those who read this book can connect with others over its questions and teachings about ourselves and our many histories, and hopefully inspire more positive futures as proud Americans. 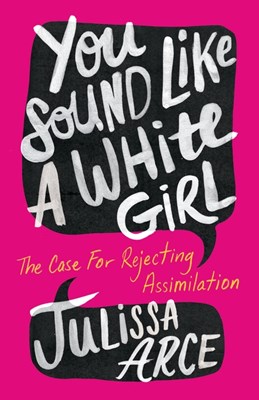 You Sound Like a White Girl: The Case for Rejecting Assimilation