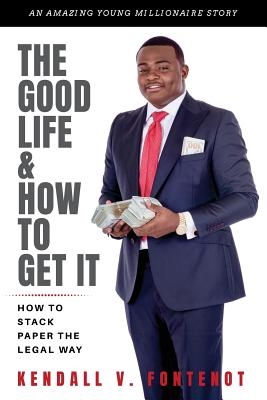 The Good Life & How To Get It: How To Stack Paper The Legal Way

Since birth Kendall V. Fontenot was never the type to limit himself nor his potential to the stereotyped views of others. Fontenot was clearly an independent, out-of-the-box thinker, from the time he was a little tot.

Since birth Kendall V. Fontenot was never the type to limit himself nor his potential to the stereotyped views of others. Fontenot was clearly an independent, out-of-the-box thinker, from the time he was a little tot.

Fontenot was only seven years old when he first stumbled across the laws of supply, demand and profit. His very first foray into the realm of business began at school, as a precocious pencil salesman--serving his peers' insatiable appetite for demolishing pencils in a popular kid's game.

After discovering how to turn one quarter into two, it was as if young Fontenot had discovered an enthralling new magic trick, called business. Fascinated now, young Fontenot dedicated his entire childhood to tinkering with business idea after business idea, to create profit for himself--and to financially unburden his mother after his parents' painful separation.

Dealing with all of the regular coming-of-age challenges that a young man faces in school, family, and neighborhood life, Fontenot somehow managed to carve out a business schooling of his own making. Amidst it all, he kept himself in a perpetual state of experimentation and self-learning around the laws of business.

Facing setback after setback, challenge after challenge, each year of Fontenot's developing life became the priceless lessons and the pearls of wisdom that would ultimately make him a self-made millionaire by the tender age of twenty.

Born African-American, male, and one of two children in a single parent Baton Rouge, Louisiana home isn't typically known as the road to riches--but Fontenot's memoir reveals he's not the type to look for well worn paths or commonly traveled roads; instead, he believes in paving roads where there are none.

Kendall never liked being shunned, dismissed or underestimated because he was young. He believed and continues to believe that hard work, good work and achievement is all the merit one needs regardless of age.

Now, as a young successful African American entrepreneur, Fontenot wants to share his success tips to a generation of American youth and beyond. Fontenot believes that dreams become available when families can live in abundance and not want. He also believes that an individual's or family's greatest hope of reaching that plateau of freedom, is through entrepreneurship.

Today, at the age of 30, Fontenot wants to be a very visible and active role model for young men and women of ambition--as well as people of all generations who are interested in making their dreams reality.

Fontenot's personal childhood goal was to achieve wealth, retire his family and live in financial freedom. Perhaps he met that goal a little earlier than expected.

Mr. Fontenot now owns one of the largest "Buy Here, Pay Here" minority owned auto-dealerships in the state of Louisiana.

His current ambitions are to rollout a formidable network of "Buy Here, Pay Here" dealerships nationwide in a franchise model. And with the precedent of success he's already set, no one has any reason to doubt that's exactly what he'll do.

If you are looking for a simple and clear blueprint on making money at any age, Mr. Fontenot's, "The Good Life & How To Get It," should be first and foremost book on your bookshelf.