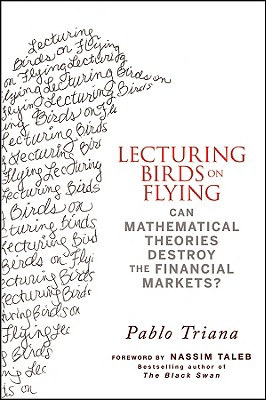 Leading thinkers have been talking for years about the conflicts between theoretical and real finance. Triana moves the conversation to an easy-to-follow narrative, and explains how it is that theoretical finance can fail dramatically in the real world.

For the past few decades, the financial world has often displayed an unreasonable willingness to believe that "the model is right, the market is wrong," in spite of the fact that these theoretical machinations were largely responsible for the stock market crash of 1987, the LTCM crisis of 1998, the credit crisis of 2008, and many other blow-ups, large and small. Why have both financial insiders (traders, risk managers, executives) and outsiders (academics, journalists, regulators, the public) consistently demonstrated a willingness to treat quantifications as gospel? Nassim Taleb first addressed the conflicts between theoretical and real finance in his technical treatise on options, Dynamic Hedging. Now, in Lecturing Birds on Flying, Pablo Triana offers a powerful indictment on the trustworthiness of financial theory, explaining--in jargon-free plain English--how malfunctions in these quantitative machines have wreaked havoc in our real world.

Triana first analyzes the fundamental question of whether financial markets can in principle really be solved mathematically. He shows that the markets indeed cannot be tamed with equations, presenting a long and powerful list of obstacles to prove his point: maverick unlawful human actions rule the markets, unexpected and unimaginable events shape the markets, and historical data is not necessarily a trustworthy guide to the future of the markets. The author then examines the sources of origin of many prevalent theories and mathematical dictums. He details how the field of financial economics evolved from a descriptive discipline to an abstract one dedicated to technically concocting professors' own versions of how such a world should work. He goes on to explain how Wall Street and other financial centers became eager employers of scientists, and how scientists became eager employees of financial firms. Triana concludes with an in-depth discussion of the most significant historical episodes of theory-caused real-life market malaise, with a strong emphasis on the current credit crisis.

In the end, Lecturing Birds on Flying calls for the radical substitution of good old-fashioned common sense in place of mathematical decision-making and the restoration to financial power of those who are completely unchained to the iron ball of classroom-obtained qualifications.