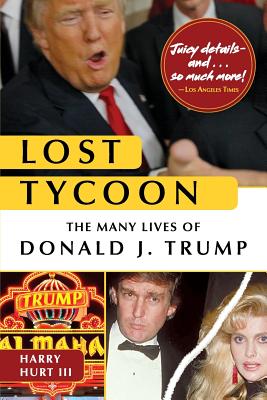 Lost Tycoon: The Many Lives of Donald J. Trump (Reprint)

Awarded The New York Times Critics' Top Books of 2017 Lost Tycoon presents an unvarnished, in-depth portrayal of the man who vows to "Make America Great Again. " Although it was first published in 1993, Lost Tycoon shows us that The Donald's character, political philosophy, ethics, and attitude towards women haven't changed much in two decades.

Lost Tycoon presents an unvarnished, in-depth portrayal of the man who vows to "Make America Great Again." Although first published in 1993, Lost Tycoon shows us that The Donald's personal character, political philosophy, business ethics, and attitude towards women haven't changed much in the past two decades.

Trump is a man of many lives. He is arguably the greatest self-promoter in the annals of American business. After inheriting a fortune, he made and lost billions in real estate and casino gambling, rising phoenix-like from his own ashes. He is a reality television show star, a father, a grandfather, and an alleged rapist. In Hollywood terms, he has literally been the producer and director of his own biopic--a real life "Citizen Kane" --whose father hammered the same lines into his head when was a little boy: "You are a killer . . . you are a king . . . you are a killer . . .you are a king."

Harry Hurt has created a cinema verité-style narrative which allows the words and actions of the principals to speak for themselves. It is indisputable that Donald's exploits in business, entertainment, and politics prove that he is--to borrow a metaphor from Fred Trump Sr.--"a killer." Reading this important biography about the real Donald Trump will help you to make an informed and engaged choice as to whether he is worthy of being "king."

Harry Hurt III is an award-winning print journalist, a former New York Times columnist, a former correspondent for Newsweek, a video journalist, and the author of six nonfiction books, including Texas Rich, a bestselling biography of the H.L. Hunt oil and silver dynasty. Hurt spent nearly three years researching and writing Lost Tycoon. He interviewed Donald Trump and observed him in action in New York City and Atlantic City. He reviewed thousands of pages of court documents and interviewed well over 100 people, including some of the most trusted confidants in the infamous Donald-Ivana-Marla love triangle that made front page tabloid headlines.