Always Day One: How the Tech Titans Plan to Stay on Top Forever

An acclaimed tech reporter reveals the inner workings of Amazon, Facebook, Google, Apple, and Microsoft, showing how to compete with the tech titans using their own playbook. 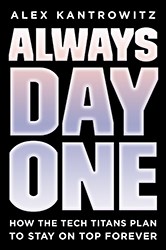 At Amazon, “Day One” is code for inventing like a startup, with little regard for legacy. Day Two is, in Jeff Bezos’s own words, “stasis, followed by irrelevance, followed by excruciating, painful decline, followed by death.”

Most companies today are set up for Day Two. They build advantages and defend them fiercely, rather than invent the future. But Amazon and fellow tech titans Facebook, Google, and Microsoft are operating in Day One: they prioritize reinvention over tradition and collaboration over ownership.

Through 130 interviews with insiders, from Mark Zuckerberg to hourly workers, Always Day One reveals the tech giants’ blueprint for sustainable success in a business world where no advantage is safe. Companies today can spin up new products at record speed—thanks to artificial intelligence and cloud computing—and those who stand still will be picked apart. The tech giants remain dominant because they’ve built cultures that spark continual reinvention.

It might sound radical, but those who don’t act like it’s always day one do so at their own peril. Kantrowitz uncovers the engine propelling the tech giants’ continued dominance at a stage when most big companies begin to decline. And he shows the way forward for everyone who wants to compete with—and beat—the titans.

In the excerpt below, Kantrowitz tells us why, in the words Chinese venture capitalist (and author of AI Superpowers) Kai-Fu Lee, Facebook is…

“The Most Chinese Company In Silicon Valley”

At around the same time Facebook was working out its News Feed issues, an upstart messaging app called Snapchat—led by the brash Stanford graduate Evan Spiegel—built a feature called Stories, which let people share photos and videos with friends that disappeared in a day. Snapchat’s users loved how Stories gave them a carefree way to post (in contrast with Facebook, where your posts would go to everyone and stick around forever) and the app’s usage exploded. Spiegel, who once spurned a $3 billion acquisition offer from Zuckerberg, was now hitting him where it hurt. In the zero-sum game of social media, where time spent on one platform is time not spent on another, Spiegel had the energy, the sharing, and was driving his company toward a hot IPO.

As Snapchat took off, an 18-year-old developer named Michael Sayman joined Facebook. Sayman had built a game that caught Zuckerberg’s eye, and the company hired him as a full-time engineer in 2015. Sitting through orientation, Sayman heard speeches about how Facebook’s leaders would listen to anyone’s ideas, and took the message to heart. “I believed it,” he told me. Before orientation was over, he spun up a presentation about how teens, already drifting to Snapchat, were using technology, and how Facebook might want to build for them.

Still barely old enough to buy a lottery ticket, Sayman started presenting his ideas to Facebook’s executives and soon found himself in front of Zuckerberg. His presentation didn’t initially impress. But Chris Cox, then Facebook’s head of product, convinced Zuckerberg to give him a small team to experiment. “There was no blueprint,” Sayman told me. “I had a few ideas, people thought that they should let me be creative, they gave me the headcount to be creative, and there was no problem.”

As time went on, Sayman watched his fellow teens sharing less on Facebook’s family of apps, and more on Snapchat. He turned his focus to Snapchat Stories, which he believed Facebook should build into its products. “I wanted the company to feel like Snapchat was an existential threat,” he said. “I wanted Facebook to panic.”

Sayman brought his concerns to Zuckerberg, who had heard from others who came to similar conclusions. As a teenager, Sayman was invaluable. He could help Zuckerberg learn Snapchat’s culture. “He would point us to—Here's the media that I follow, or here are the people I think are influential, who are cool,” Zuckerberg said. “I’d go follow those people, or talk to them, have them come in. That ends up being the iterative process of learning what matters.”

Zuckerberg said he followed these tastemakers on Instagram, but confirmed he’s a Snapchat user too. “I try to use all the stuff,” he told me. “If you want to learn, there are so many lessons out there where people will tell you about things you're not doing as well as you could. People tell you so much if you just care about understanding what they're looking for.”

This sort of experimentation has led Zuckerberg to some unexpected places. “When we were originally thinking about formally building a dating service for Facebook, I signed up for all the dating services.” he told me. “I was showing Priscilla (his wife) one of the apps. It was an app where you got matched with one person a day. I was like, ‘Here’s this app.’ And she said, ‘Hey, I'm having dinner with her tomorrow night!’” He matched with his wife’s friend. No word on how that dinner went.

Sayman confirmed Zuckerberg was a willing Snapchat student. “He'd send snaps with me and I would critique him on his snaps,” Sayman said. “I'd be like 'No, Mark. That's not how this works!'"

Eventually, the groundswell of support for Stories inside Facebook—generated by Sayman and others—got through to Zuckerberg. And in August 2016, Facebook’s executives called reporters into their offices to reveal a new product they called Instagram Stories. The product was a carbon copy of Snapchat Stories, lifting everything including the name.“They deserve all the credit,” then-Instagram CEO Kevin Systrom told TechCrunch, nodding to Spiegel and his team.

Copying Stories was ruthless. It slowed Snapchat’s growth considerably, and likely destroyed billions of dollars of value in its parent company, Snap Inc., which is trading below its IPO price as of this writing. Snap, frustrated and weakened, is now speaking with FTC’s antitrust investigators about Facebook’s anti-competitive tactics, relying on a dossier it’s built up called “Project Voldemort,” a reference to the villain in Harry Potter.

Evil villain or not, Facebook would’ve been in serious trouble without Stories, which has helped it recapture the friends and family sharing it was losing a few years ago, and restore the vibrancy to its app. Facebook is still losing teen users in the US by about 3% each year, according to eMarketer. But without Stories, and a renewed focus on messaging (another form of intimate sharing), it could’ve been in a much worse position. Copying was a move of self-preservation.

Sayman credited Facebook’s ability to stay relevant with an internal awareness of its place in is the world. “Facebook is just an internet app. Especially in 2015 and 2016, it was just an internet app. Any other app could come about and beat it,” he said. “Mark was like, What do people want? Let's just give it to them. He was a bit more cautious. He was more vigilant. He was definitely not thinking his product was eternal.”

In China, where copying and iterating on products has long been the norm, Facebook is known as “the most Chinese company in Silicon Valley,” according to Chinese venture capitalist Kai-Fu Lee, who wrote about this in his book, AI Superpowers. I sat down with Lee on one of his periodic visits to the Bay Area, and asked him to share his feelings about Zuckerberg. “Why do we stigmatize copying?” Lee said. “Don’t we learn everything from copying first? Don’t we learn music by copying Mozart and Beethoven? Don’t we learn art by copying whichever style that is taught? Through copying, you understand the essence of what you’re building, then you can innovate and build. It would seem copying is a reasonable way to get started.”

From the moment Facebook copied Stories, it’s iterated on it and improved it. And now, its version is widely considered better than Snapchat’s. Some of Facebook’s improvements have been so good that Snapchat has even copied them back.

The graveyard of dead social networks is littered with the corpses of companies that were once  unstoppable but were ultimately done in by pride or an inability to invent. MySpace, Livejournal, Foursquare, Friendster, and Tumblr are among them. Facebook, meanwhile, has reinvented repeatedly and remains on top, in large part due to its feedback culture.

“Obviously, we’d rather be genius and invent first,” Lee told me. “But if you can’t, then copy first and then iterate.”

Excerpted from Always Day One: How the Tech Titans Plan to Stay on Top Forever.
Published by Portfolio, an imprint of Penguin Random House LLC.
Copyright 2020 by Alex Kantrowitz.
All Rights Reserved.

Alex Kantrowitz is a senior technology reporter at BuzzFeed News. His work has been referenced by dozens of major publications, from the New Yorker to the Wall Street Journal to Sports Illustrated. Kantrowitz is a graduate of Cornell University’s college of Industrial and Labor Relations. This is his first book. 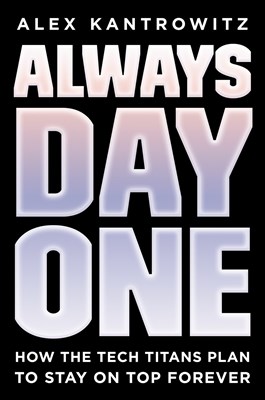 Always Day One: How the Tech Titans Plan to Stay on Top Forever