Paul Downs takes readers through a year in the life of running his small business, exposing all the ups and downs of being a boss. Paul Downs writes for the "You're the Boss" blog at The New York Times website, so he's a practiced writer. What we didn't know is how practiced. For the entirety of 2012, he kept a journal to "shine light on the day-to-day life of a small business owner." And that is now a new book, Boss Life; Surviving My Own Small Business. Boss, as we know, is often seen as a bad word. It's what they call the villains at the end of video game levels that you have to kill to get to the next level. But I think most bosses are in it for the right reasons, trying to do the best for themselves, their families, and their employees.


As he says in his letter to booksellers:

From Ebenezer Scrooge to Mr. Burns on The Simpsons, bosses are portrayed as evil, vindictive, and relentless in their pursuit of power. It's much harder to find a sympathetic portrayal of a real boss: someone who cares about his workers and tries to promote his employees' well-being and his own. That's me. That's Boss Life.

I'm sure many reading here can relate. And besides being portrayed as the black hat, Bosses often live on the edge of financial solvency, which means they're living on a double edge sword of unpopularity and terror. As Downs relates in that same letter.


I've been running my own company for twenty-nine years. Most of that time I've been closer to failure than prosperity.

Many of you reading this run your own business, or a part of it. I'm sure many others are hoping to take the plunge and start a company of your own. The stories Downs offers will help propel you down that path and anticipate the fallen trees that may obscure it from time to time.

Here's just a piece of the opening entry to get you started.

Nine a.m., January 2. Paul Downs Cabinetmakers, custom board-room table maker, starts its twenty-sixth year with a meeting. We are on the fourth floor of an old factory in Bridgeport, Pennsylvania. I stand at a battered table, returned to us for storage when our client, a New York bank, downsized in 2008. Thirteen sleepy workers, sit-ting, wait for me to speak.

We meet every week at this time. The usual agenda is a review of our progress toward meeting monthly and yearly sales goals, a re-view of projects in progress, and a report on our cash reserves. I'll get to all that, but start with a surprise: good news—2011 has ended on a high note. We have a record amount of cash on hand and a full order book to take us through the next two months. I confidently state that we have achieved success at last. The business has finally done more than build tables. It has also made good money.

Two years ago, as 2010 began, I was not so confident. A decade of my incompetent stewardship, capped by two brutal years of recession, had left the company at death's door. We had shrunk from twenty-three employees to six, and I had just $16,239 in the bank—enough to operate for three days. A small business lives or dies on cash. It is the fuel that pays the rent, buys the materials, funds the ads, and makes the payroll. If I ran out, the shop, the tools, the Web site, the trained employees, the catalogue of designs: all would sit idle. The business would be dead.

I desperately needed clients with cash in hand. This is the perennial cry of the incompetent boss—if we just had more sales, every-thing would be great! But for me it was true. Before 2008, I had been very bad at cash management. Then, as the world slid into recession, buyers disappeared. My partner and I fought about the money we had left, and one night he took our cash reserves and paid down our line of credit. Eighty-eight thousand dollars of the $105,000 I had on hand was gone. I immediately laid off half my people. With a shrinking order book, a demoralized workforce, and a hundred thousand dollars in past-due bills, I had one question: how soon would I have to shut the doors? QuickBooks couldn't tell me, so I wrote a spread-sheet that gave me a running bank balance, taking into account all income and expenses, for as far forward as I cared to look. I could move transactions from one day to another to see how delaying or accelerating payments affected my bank balance. As long as it never went below zero, I was in business. My sheet was a new way to see my cash situation. Unfortunately, it showed that I'd go broke in three weeks.

I barely survived the terrible year 2009. Customers purchase our product, custom conference tables, when a business moves or expands. As 2008 ended, we still got a few orders from projects initiated before the crash, but sales volume soon took a huge drop. I took any job I could find, but I had to lay off five of my eleven remaining employees. I cut all my workers' pay by 15 percent and set my own salary at just $36,000 a year. I rarely had more than a week's worth of cash on hand. The stress of wondering whether I would have to close the doors was relentless. I experienced shooting chest pains and sleepless nights. But I never quite failed. By juggling incoming and outgoing payments, I managed to pay off my vendors and survive to see another year. The year 2010 started with no relief—in January, I came within a day of running out of money. But in February, buyers started calling. By March 2010, with orders appearing at a sustainable rate, I was able to restore everyone's pay to previous levels and rehire some laid-off workers. By year's end, I had ten employees and a bank balance of $106,777.

The favorable trend continued in 2011. I added more people and completed more jobs. At the end of the year, we got a large order that generated a huge payment. Our bank balance topped out at $303,834, and I was able to distribute big bonuses to my workers and to myself, totaling $166,680. I was a happy man. I had survived the worst of the recession and learned how to manage cash flow. In three years, I had gone from nearly bankrupt to reasonably secure, paid off a pile of vendor debt, and was looking forward to further growth in 2012.

Does compressing three years of disaster and regeneration into dollars communicate what it was like? Do those numbers really depict my own stress, my workers' fear for their jobs, and my debtors' doubts that I would pay them back? Definitely not. But those balances are an objective measure of the success or failure of a business. In the end it has to be about the money. Numbers don't lie.

Back to my meeting. On this day I have $137,154 on hand, but my other numbers get reset. Inquiries, sales, profits: all zero. Every year I start from scratch, worrying that this time the phone won't ring, orders will stop, and my cash will dry up. I don't believe that the things we do to generate sales will suddenly stop working, but I've been through bad times and it's hard to have faith in the future.

Paul Downs started making custom furniture in 1986, shortly after graduating from the University of Pennsylvania with a degree in engineering. Downs has only one line on his rsum but he has a wide variety of skills gained in twenty-four years of running his business. His clients range from individuals and small businesses to Fortune 500 companies, all branches of the military, and foreign governments. Downs lives with his wife and three sons outside of Philadelphia. 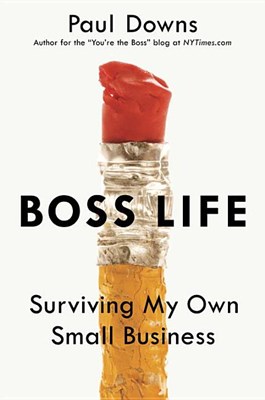