Work Your Next Job: An Excerpt from Build for Tomorrow 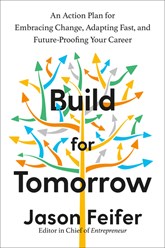 We experience change in four phases. The first is panic. Then we adapt. Then we find a new normal. And then, finally, we reach the phase we could not have imagined in the beginning, the moment when we realize that we wouldn’t go back.

Build for Tomorrow is designed to accelerate that process—to help you lessen your panic, adapt faster, define the new normal, and thrive going forward. And it arrives as we all, in some way, have felt a shift in our lives. The pandemic forced a moment of collective change, and we are still being forced to make new plans and adjustments to our lives, families, and careers. Many of us will never go back, continuing to work from home, demanding higher wages, or starting new businesses.

To help people along this journey, Entrepreneur magazine editor in chief Jason Feifer offers stories, lessons, and concrete exercises from the most potent sources of change in our world. He speaks to the world’s most successful changemakers—from global celebrities like Dwayne “The Rock” Johnson and Maria Sharapova to innovative CEOs and Main Street heroes—to learn how they decide what to protect, what to discard, and how to move forward without fear. He also draws lessons from history, looking at how massive changes across time can help us better understand the opportunities of today. For example, he finds guidance for our post-pandemic realities inside the power shifts that occurred after the Bubonic Plague, and he reveals how the history of innovations like the elevator and even the teddy bear can teach anyone to be more forward-thinking.

We cannot anticipate tomorrow’s needs, but it shouldn’t take a crisis to push us forward. This book will show you how to make change on your own terms.

The following excerpt comes from Chapter 8.

Work Your Next Job

My wife recently introduced the Hamilton soundtrack to our son, who now wants to listen to it on repeat every time we’re in the car. That’s fine. It sure beats the Pokémon theme song we once endured on loop. Like everyone else, I think Hamilton is a masterpiece—but there’s this one moment, toward the end, that I always find grating.

The musical Hamilton is, of course, a Broadway retelling of America’s founding fathers by Lin-Manuel Miranda, with a focus on the critical role played by the future first Treasury secretary, Alexander Hamilton. At the end of Act I, after the Revolutionary War is won, the founding fathers are debating the kind of government they’ll build. Hamilton, James Madison, and John Jay decide to write essays defending the new Constitution and published anonymously, to push voters to ratify the document. In the musical, this becomes a brief but very dramatic moment. Aaron Burr says:

In the end, they wrote eighty-five essays, in the span of six months
John Jay got sick after writing five
James Madison wrote twenty-nine
Hamilton wrote the other fifty-one!

That last line is spoken with intensity, synchronized with soaring music, as if the very idea of it—writing fifty-one essays!—would be jaw-dropping to the audience. That is the part of the musical I hate. Why? Because if you’re a writer, it is really not that hard to write fifty-one essays. (Even if, fine, they were historically influential essays.) I spend my days writing, and I’m currently editing a magazine and making podcasts and writing this book all at the same time, and I hardly consider it a feat of strength. But the musical treats this moment like Hamilton just killed fifty-one men with his bare hands.

One day, I told my wife about this objection. She wasn’t having it.

“Hamilton was working his next job,” she says. “Isn’t that what you’re obsessed with?”

This is true. “Work your next job” is one of my favorite phrases, and the guiding philosophy of my career, and a critical part of adapting to change. And as it turns out, my wife was right: That was exactly what Hamilton was doing. She promptly pointed me to Alexander Hamilton by Ron Chernow, the biography that the musical is based on, where the essay writing is explained in more detail:

For Hamilton, it was a period of madcap activity. He was stuck with his law practice and had to squeeze the essays into breaks in his schedule, as if they were a minor sideline. Robert Troup noted of Hamilton’s haste in writing The Federalist: “All the numbers written by [Hamilton] were composed under the greatest possible pressure of business, for [he] always had a vast deal of law business to engage his attention.”

In other words, Hamilton was a busy guy with a busy business. But he understood that the most important thing was also the thing he had the least amount of time for. So he made the time, and changed his life and America as a result.

THE PARADOX OF GOALS

In front of you right now, there are two sets of opportunities:

Opportunity Set A: This is all the work that’s expected of you. It’s your job responsibilities, and how your success is measured. The wonks would call this your KPI—Key Performance Indicators. Whatever you need to do to fulfill your boss’s and anyone else’s expectations, that is Opportunity Set A.

Opportunity Set B: This is all the stuff available to you, but that nobody’s asking you to do. Perhaps these opportunities are at your job—they’re new responsibilities you could volunteer for, or teams you could join, or skills you could learn. These opportunities may also be outside your job: They’re a class you could take or a thing you try. Nobody in the world expects you to pursue these things; nobody is asking or even suggesting them. But they are available. That’s Opportunity Set B.

Now here’s what I’m saying: Every day, your time will be consumed by Opportunity Set A. You will be at work, and you’ll be scrambling to fit everything in, but you will move with purpose because your incentives are all aligned around Opportunity Set A. This is where promotions come from, and where your boss’s praise originates, and where you see upward mobility. But in truth, if you look at the long tail of your life, Opportunity Set A is actually the less important set. If you focus on Opportunity Set A, you will only be qualified to do the things that you’re already doing.

If you want to succeed in the long term, and ride the waves of change, then Opportunity Set B is infinitely more important. It’s where your true energy and passion should be. Your days should be devoted to checking the boxes of Opportunity Set A—after all, we have paychecks to earn—and then pouring your life into Opportunity Set B.

This is what I mean by “work your next job.” While you are at your current job, you are laying the foundation for your next one. Opportunity Set B is where you learn new things and develop transformational new skills. And here’s the most important part: When you pursue Opportunity Set B, you do not need to know how these new skills will pay off. You also do not need to know where your career is going. In fact, it might even be better that way.

Excerpted from Build for Tomorrow: An Action Plan for Embracing Change, Adapting Fast, and Future-Proofing Your Career
Copyright © 2022 by Jason Feifer.
Published by Harmony Books, an imprint of Random House, a division of Penguin Random House LLC, New York.
harmonybooks.com
All rights reserved.

Jason Feifer is the editor in chief of Entrepreneur magazine, a startup advisor, host of the podcasts Build For Tomorrow and Problem Solvers, and has taught his techniques for adapting to change at companies including Pfizer, Microsoft, Chipotle, DraftKings, and Wix. He has worked as an editor at Fast Company, Men's Health, and Boston magazine, and has written about business and technology for the Washington Post, Slate, Popular Mechanics, and others.

Jason Feifer is the editor in chief of Entrepreneur magazine, a startup advisor, host of the podcasts Build For Tomorrow and Problem Solvers, and has taught his techniques for adapting to change at companies including Pfizer, Microsoft, Chipotle, DraftKings, and Wix. He has worked as an editor at Fast Company, Men's Health, and Boston magazine, and has written about business and technology for the Washington Post, Slate, Popular Mechanics, and others. 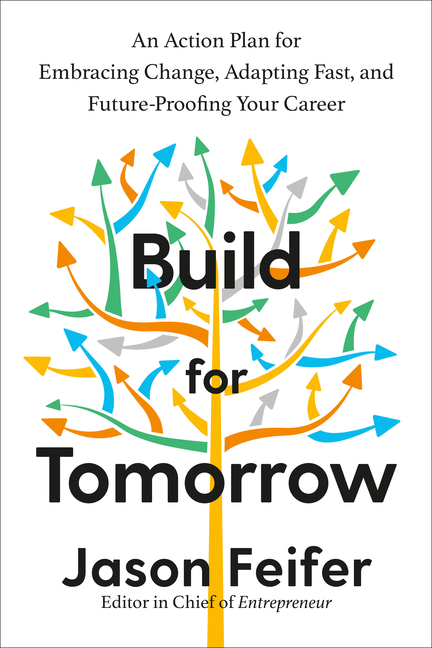 Build for Tomorrow: An Action Plan for Embracing Change, Adapting Fast, and Future-Proofing Your Career