Every Nation for Itself, An Excerpt

One of the real stand-out successes in business books of 2010 was Ian Bremmer's The End of the Free Market. It stood out because it wasn't a typical business book—it seemed like something more likely to come out of Foreign Affairs than Portfolio—and there wasn't much precedent for a book of its type being a big commercial hit in the genre. His previous book, The J Curve: A New Way to Understand Why Nations Rise and Fall was a critical success, selected by The Economist as one of the best books of 2006, and got him on some of the cable talk shows, but The End of the Free Market turned into a national bestseller.

One of the real stand-out successes in business books of 2010 was Ian Bremmer's The End of the Free Market. It stood out because it wasn't a typical business book—it seemed like something more likely to come out of Foreign Affairs than Portfolio—and there wasn't much precedent for a book of its type being a big commercial hit in the genre.

His previous book, The J Curve: A New Way to Understand Why Nations Rise and Fall was a critical success, selected by The Economist as one of the best books of 2006, and got him on some of the cable talk shows, but The End of the Free Market turned into a national bestseller. I mean, here was a nuanced and wonky text by the founder of a political risk consultancy about the growing schism between free markets and state capitalism around the world, and where on that continuum states around the world fall, that forecast a potential economic showdown between the two systems—pretty heady, dense material—and it was a hit! People ate it up. To call it's success a surprise is probably an understatement—despite how well connected its author may be.

This week, Portfolio is releasing Bremmer's follow-up to that success, Every Nation for Itself: Winners and Losers in A G-Zero World, and we're fortunate to have an excerpt for you. From the book's introduction, here is Ian Bremmer:

For the first time in seven decades, we're living in a world without leadership. In the United States, endless partisan combat and mounting federal debt have downgraded hopes for full recovery from the Great Recession, stoking fears that America's best days are done. Across the Atlantic, a debt crisis cripples confidence in Europe, its institutions, and its future. In Japan, the rebuilding following an earthquake, tsunami, and nuclear meltdown has proven far easier than recovery from more than two decades of political and economic malaise. A generation ago, these were the world's powerhouses. With Canada, they made up the G7, the group of free-market democracies that powered the global economy forward. Today, they are struggling just to find their footing.

Not to worry, say those who herald the "rise of the rest." As established powers sink into late middle age, a new generation of emerging states will create a rising tide that lifts all boats. Increasingly dynamic China, India, Brazil, Turkey and other emerging markets will fuel the world's economic engine for many years to come. Americans and Europeans can take comfort, we're told, that other states will do a larger share of the heavy-lifting as their own economic engines rattle forward at a slower pace. Unfortunately, rising powers aren't yet ready to take them on either. For now, governments of emerging states will instead be focused on managing the next critical stages of their own economic development.

In a world where so many challenges transcend borders—from the stability of the global economy and climate change to cyber-attacks, terrorism, and the security of food and water—the need for international cooperation has never been greater. Cooperation demands leadership. Leaders have the leverage to coordinate multinational responses to transnational problems. They have the wealth and power to persuade other governments to take actions they wouldn't otherwise take. They pick up the checks that others can't afford and provide services no one else will pay for. On issue after issue, they set the international agenda. These are responsibilities that the West is now much less able to afford and that emerging powers are not ready to accept.

Nor are we likely to see leadership from global institutions. At the height of the financial crisis in November 2008, political leaders of the world's most influential established and emerging countries gathered in Washington under the banner of the G20, the expanded group of leading economic powers. The G20 helped limit the damage, but the sense of collective crisis soon lifted, cooperation quickly evaporated, and G20 summits have since produced virtually nothing of substance. Nor are institutions like the UN Security Council, the International Monetary Fund, and the World Bank likely to provide real leadership, because they no longer reflect the world's true balance of political and economic power.

If not the West, the rest, or the institutions where they come together, who will lead? The answer is no one. Neither the once-dominant G7 nor the unworkable G20. We have entered the G-Zero, a world in which, for the first time since the end of World War II, there is no single power or alliance of powers ready to take on the challenges of global leadership.

[Every Nation for Itself] is not about the decline of the West, because America and Europe have overcome adversity before and are well-equipped over the long run to do it again. Nor is it about the rise of China and other emerging market players, because the governments of these countries now stand on the verge of tremendous tests at home. Not all of them will continue to rise, and it will take much longer than anyone expects for those that emerge to prove their staying power. This is a book about a world in transition, one that is especially vulnerable to crises that appear suddenly and from unexpected directions. Nature still hates a vacuum, and the G-Zero won't last forever. But over the next decade and perhaps longer, a world without leaders will undermine our ability to keep the peace, to expand opportunity, to reverse the impact of climate change, and to feed growing populations. Its effects will be felt in every region of the world—and even in cyberspace.

Excerpted from Every Nation for Itself: Winners and Losers in a G-Zero World Copyright © Ian Bremmer, 2012 All rights reserved Reprinted by arrangement with Portfolio, a member of Penguin Group (USA), Inc., Copyright (c) Ian Bremmer, 2012.

About the Author
Ian Bremmer is a president of Eurasia Group, the world's leading global politcal risk research and consulting firm. He has written for The Wall Street Journal, The Washington Post, Newsweek and Foreign Affairs. His most recent books include The J Curve and The End of the Free Market. He lives in New York City and Washington, D.C. 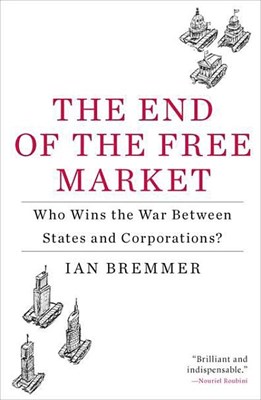 End of the Free Market: Who Wins the War Between States and Corporations? 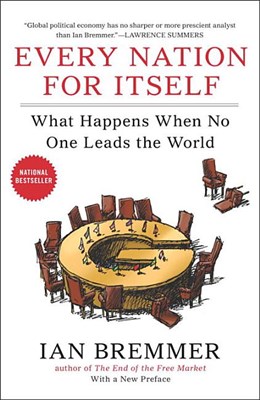 Every Nation for Itself: What Happens When No One Leads the World