Fanocracy: Turning Fans Into Customers and Customers Into Fans

"The most powerful marketing force in the world isn’t social media, email blasts, search ads, or even those 15 second commercials before a YouTube video. It’s fandom." 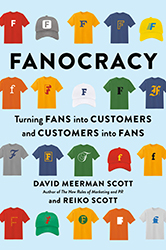 David Meerman Scott and his daughter Reiko are very different—one is a baby boomer business strategist, the other a millennial medical student. But both noticed that the kind of enthusiasm they once reserved for pleasures like the Grateful Dead (David) and Harry Potter (Reiko) now extends to all sorts of companies and organizations. So they teamed up to explore a big question: Why do some brands, even in supposedly boring categories like car insurance and enterprise software, attract not just customers but raving fans?

The key is creating what they call a “fanocracy”—an organization that puts the needs and wishes of fans ahead of every other priority. It can be scary, at first, to focus on intangibles like community, generosity, and fun, rather than squeezing every penny from each interaction. But those who apply the strategies in Fanocracy are more likely to dominate their categories. And beyond the financial benefits, fanocracies spread more joy and inspiration to the world at large.

In the excerpt below, Reiko explores how the busines model of social media is undermining "the kind of human connection we crave," and how we can do better by focusing on people over products.

The Lonely Chaos of the Digital Age

The internet brings promise of tremendous easy engagement with audiences around the world. Social networks such as Facebook and content distribution services like YouTube are free and simple to use, and reach every human on the planet with an internet connection, so it’s no wonder that billions of people around the world have gravitated toward them.

In the earliest days of social media, participating in these networks was like a virtual cocktail party. We could meet with our friends and ask what they were up to. We could stay in touch after school or work.

We’ve posted, shared, liked, and upvoted, and it was an enjoyable and effective way to stay in touch or reconnect with people we haven’t seen in a long while.

But today, it’s another story altogether. The algorithms deployed by social networks like Facebook don’t show us what we want to see, because the technology favors profit for shareholders rather than the original promise of allowing people to interact with their friends, families, and colleagues. We get tidal waves of spam email and social networks that display advertisements instead of messages from our friends, and fake news instead of what we, as humans, really need to know to lead fulfilling and productive lives.

Worse, scammers have figured out how to game the networks to lure people into partisan content loops to prey on our worst fears and create new ones. While most people understand that a free social network means some loss of privacy, we didn’t sign up to have our innermost thoughts, secrets, and notes to ourselves and loved ones stolen and sold to the highest bidder.

The result is a polarizing and cold digital world. Many people now feel that the promise of online social connection just isn’t for them anymore—the romance is over. Many people have told us that they have canceled their online presence and opted for privacy they can control themselves.

We found the following information interesting: in yearly surveys of over one million eighth, tenth, and twelfth graders in the United States, those who use more electronic communications are less happy, according to a 2018 report by Jean M. Twenge, Gabrielle N. Martin, and W. Keith Campbell. Their research shows that psychological well-being (measured by self-esteem, life satisfaction, and happiness) suddenly decreased after 2012, when smartphone usage shot up. And it’s not just adolescent users of electronic communications who are unhappy. We all feel the increasing stress related to keeping up appearances online.

“The pendulum has swung too far in the direction of superficial online communications at a time when people are hungry for true human connection.”

Our book was born from our growing frustration with digital gimmickery. There’s something broken and we all feel it. We are on the cusp of an important cultural shift.

We’ve seen similar important cultural shifts in the past.

For example, starting in the 1950s, Americans became excited about the promise of processed foods. Swanson TV dinners, Pringles Newfangled Potato Chips, and Stove Top stuffing became the rage. Fast-food restaurants such as McDonald’s exploded in popularity. The media gushed about how increased shelf life and ease of preparation would make everyone’s lives easier.

But America has swung back in a big way in recent years as people have begun to realize that processed food isn’t good for our health. And it doesn’t taste so great either! Many Americans now think differently about food. We shop and cook in ways that would be more familiar to our great-grandparents. We crave fresh vegetables, happily go out of our way to shop at farmers’ markets, and pay extra for free-range chicken.

We see the same shift playing out in the world of human communications. We’ve gone too far into manufactured friendship through social media, and something different is coming next. The pendulum is swinging back to genuine, authentic human connections.

Online presence brought me and others little comfort when the city of Boston was in crisis. What did help us was the united force of a community of people rallying together behind a passion for a winning sports team.

Too many organizations react to digital chaos by doubling down, trying to shout ever louder, outdoing one another about their products and services in social media and other online channels. Uninvited, they send us their email blasts hyping their offerings with increasing frequency. They try to get through to us, past all of the noise, by creating and sending more videos, more tweets, and requesting more LinkedIn connections. It’s become too easy to spray content out via social media without a long-term strategy. After all, it takes just a minute or two to write and send a tweet.

The solution isn’t to do more of the same. It takes more heart to start a movement.

In a digital world where our lives are increasingly cluttered and superficial, we’re missing something tremendously powerful: genuine human connection. People are going to be most invested in that which creates a sense of intimacy, warmth, and shared meaning in a world that would otherwise relegate them to a statistic.

The solution to any frustration about the lack of human connection in our lives is easy. It’s up to us to develop and nurture what we are most passionate about. For me and my father, it’s going to concerts or book clubs with friends or cosplaying at Comic Con. For others, it might be running, playing golf, doing needlepoint, going to plays, collecting fine wine, spending Saturday afternoons at art galleries and museums, taking writing classes, going to conferences, practicing yoga, hitting the gym, gardening, or fishing.

Fandom is everywhere. It’s the key for any organization, artist, solopreneur, or other entity to be successful in bringing people together. Fandom spans generations and subject matter to bind individuals together in excitement, purpose, and buying power. No matter whom you’re dealing with, understanding fandom is the cornerstone to your success.

We call this act of consciously bringing people together through a shared endeavor a fanocracy: an organization or person that honors fans and consciously fosters meaningful connections among them.

The suffix “-cracy,” from the Greek kratos for “rule,” is used in popular culture as well as in academia to mean government by a particular sort of people or according to a particular principle. A fanocracy is a culture where fans rule, and that’s what we see emerging in today’s world. We are moving into an era that prizes people over products.

“When we build on our individual strengths to achieve greatness together, fanocracy comes alive.”

The fundamental ingredient for true fandom—meaningful and active human connection—demonstrates a shift in the way a company relates to its customers. It is more forthright, helpful, and transparent. It creates new experiences by turning customers into like-minded, enthusiastic fans. After all, it was fanocracy that drew Boston together to cheer the Red Sox to victory.

A true fanocracy mobilizes people to think, feel, and act together with a helpful, positive force during difficult times. In the medical world I’m in, it means a healing force in the healthy exchange between patients and doctors. Fanocracy empowers people in a way that no single individual would ever be able to accomplish by himself or herself. Mastering life happens when the joy we have in our work and play feels the same.

David Meerman Scott is an internationally acclaimed business strategist, entrepreneur, advisor to emerging companies, and public speaker. He is the author of ten previous books, including The New Rules of Marketing & PR (now in its 6th edition and in 29 languages) and Marketing Lessons from the Grateful Dead. In his spare time he surfs and travels around the world for great live music.

Reiko Scott earned a neuroscience degree from Columbia University and is now a medical student at Boston University. In her spare time she writes and publishes fanfiction based on her favorite fantasy worlds and loves to cosplay at Comic Con. 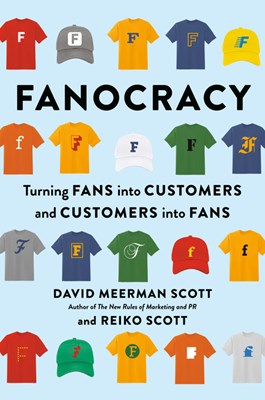 Fanocracy: Turning Fans Into Customers and Customers Into Fans