In the Smallest of Moments - An Excerpt From TouchPoints

We get pitched to a lot—about books, ideas, authors, projects; from authors, publicists, agents and publishers. It is part of what we do here, and listening to all comers is part of how we weed through the massive amount of material that is published each year, find what we think are the best projects, make connections and stay successful. But it can get a little tiring at times, especially when you know someone isn't really thrilled about the project, idea or author they're pitching.

We get pitched to a lot—about books, ideas, authors, projects; from authors, publicists, agents and publishers. It is part of what we do here, and listening to all comers is part of how we weed through the massive amount of material that is published each year, find what we think are the best projects, make connections and stay successful. But it can get a little tiring at times, especially when you know someone isn't really thrilled about the project, idea or author they're pitching. And that makes it especially contagious when the people on the other end of line are obviously and absolutely in love with the project they're working on. And Douglas Conant—the man and his book TouchPoints—is what everybody who has reached out to me has called "the real deal." Conant is the longtime president and CEO of Campbell Soup Company, and he co-authored the book with the equally formidable Mette Norgaard, a renowned leadership consultant. The book is part of the Jossey-Bass's "Warren Bennis Book" series, and you can get an idea of why everybody working on this project is so in love with it in the excerpt below.

TOUGH-MINDED ON THE ISSUE,
TENDER-HEARTED WITH PEOPLE

Times are tough. Whether you are the director of a health clinic, the superintendent of a school, or an entrepreneur making business software solutions, you must be tough-minded to prevail. In this sense, the global economy is very Darwinian. You either adapt and prevail, or you die at the hands of the competition.

Being tough-minded, however, is no excuse for being brutal. You can be tough on the issues and still be caring with people. In fact, as Doug discovered when he set out to turn Campbell's around, you need to build strong relationships and help the people around you grow if you want to get sustainable results.

When Doug began his tenure at Campbell's, the place was in a funk. Tall fences topped with barbed wire circled buildings that were equally depressing. The carpets were worn, the walls were faded, and the people looked as tired as their surroundings. They had been through a decade of aggressive pricing followed by bone-deep cost cutting, and the company was in a severe downward spiral. Given that reality, Doug began with the premise that for the company to win in the marketplace, they would first need to win in the workplace. That is, they would first need to win the hearts and minds of 20,000 employees.

Show that You Care

His first day at work, a company-wide meeting was held to introduce Doug as the new CEO. At that meeting he made a promise to all the employees that ultimately became known as The Campbell Promise: Campbell valuing people, People valuing Campbell. His point was that the leaders must show they cared about the employees' agenda before they could expect the employees to care about the company's agenda. To show that he meant it, Doug began to look for ways to tangibly demonstrate that he cared by asking everyone he ran into, "What can we do better?" "How can I help?"

One day Pat, the head of the global supply chain, answered, "This place looks like a high-security prison. How about we get rid of those rusty fences and all that barbed wire?" "Let's do it!" Doug said.

To follow up and show his support, Doug dropped by Pat's office regularly, asking: "Where are you on the plans for more security?" "Have you picked a contractor for the new fencing?" "Can we put a fresh coat of paint on the curbs?" "How about sprucing up the landscaping as well?" Those kinds of small interactions are the best-kept secret of leadership. They are the TouchPoints that take an idea and make it real.

Within a few months, there were tangible results that someone cared– improved security, discreet fences, and bright yellow curbs. On a roll, the maintenance group then tackled the building interiors by painting the hallways, putting in new carpeting, and hanging up new pictures. Over time, other people began to come up with ideas that went beyond the physical environment: What about starting affinity networks? What about experimenting with more flexible hours? Before long the exponential effect was spreading throughout the company, infusing everyone with a revived sense of possibilities: What about better-for-you soups, more convenient packaging, stronger brand messages...?

The Campbell Promise was compelling because it was heartfelt, relevant to the situation, and it spoke to people in a language they understood. The leaders showed they genuinely cared about the people, and the people came out fighting for the company. A promise had been made and kept.

Excerpted from TouchPoints: Creating Powerful Leadership Connections in the Smallest of Moments
Copyright © 2011 by Douglas R. Conant and Mette Norgaard. All Rights Reserved.
Published by Jossey-Bass, A Wiley Imprint.
Reprinted by permission of the publisher, John Wiley & Sons, Inc.

Douglas Conant is president and CEO of Campbell Soup Company. Under his leadership, Campbell reversed a precipitous decline in market value and employee engagement, improving its financial profile, enhancing its diversity and inclusion practices and raising its corporate social responsibility profile. Previously Conant held management positions at Kraft and General Mills, and was president of the Nabisco Foods Company.

Mette Norgaard is an expert on strategic leadership and learning. She advises executive teams around the world on how to create distinct learning solutions that advance their companies' strategies. She has worked senior-level leaders from Microsoft, Proctor & Gamble, GE Capital, Nucor Corp., Este Lauder, Harley-Davidson, The US Navy and Pfizer. Previously Norgaard was was a consultant for FranklinCovey Co. 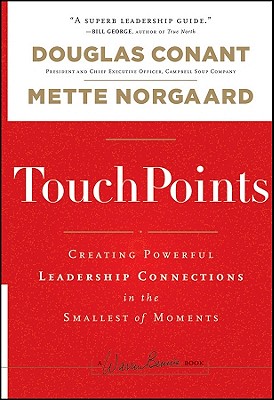 TouchPoints: Creating Powerful Leadership Connections in the Smallest of Moments