Is Your Idea Crazy Enough? An Excerpt from Creative Thinkering

IS YOUR IDEA CRAZY ENOUGH? An Excerpt from Creative Thinkering: Putting Your Imagination to Work by Michael Michalko The playful openness of creative geniuses is what allows them to explore unthinkable ideas. Once Wolfgang Pauli, the discoverer of electron spin, was presenting a new theory of elementary particles before a professional audience.

IS YOUR IDEA CRAZY ENOUGH? An Excerpt from Creative Thinkering: Putting Your Imagination to Work by Michael Michalko

The playful openness of creative geniuses is what allows them to explore unthinkable ideas. Once Wolfgang Pauli, the discoverer of electron spin, was presenting a new theory of elementary particles before a professional audience. An extended discussion followed. Niels Bohr summarized it for Pauli's benefit by saying that everyone had agreed his theory was crazy. The question that divided them, he claimed, was whether it was crazy enough to have a chance of being correct. Bohr said his own feeling was that it wasn't crazy enough.

Logic hides in Bohr's illogic. In genius, there is a tolerance for unpredictable avenues of thought. The result of unpredictable thinking may be just what is needed to shift the context and lead to a new perspective.

Here is what one marketing agency did. As reported on PSFK.com, it persuaded the "Unilever corporation to place GPS devices in selected boxes of its Omo brand detergent in Brazil. This enabled the agency to track the purchasers right to their doorsteps and surprise them with gifts. As soon as any one of the fifty Omo boxes bearing GPS devices was removed from the store shelf, one of its teams swooped into action and reached the shopper's home within hours."

The playful freedom that accompanies a "bizarre" idea permitted the agency to juxtapose possibilities that would not otherwise have been available, and to construct a sequence of events that would otherwise not have been constructed.

In another example, Spencer Silver, a 3M chemist who liked to play around with chemicals, tried mixing together different ones just to see what would happen. One of the things that happened was his invention of the special adhesive that made Post-it notes possible, a product that had accounted for over $300 million in business by 2002.

Spencer Silver is quoted as saying, "If I had thought about it, I wouldn't have done the experiment. The literature was full of examples that said you can't do this." If he had studied the literature, he would have stopped his work. The key was not knowing what the experts believed, and experimenting to see what he could do. Silver, in a "Eureka" moment, realized he had developed an adhesive that created an impermanent bond.

But the problem was how to use his discovery. The company climate permitted Silver to continue with his efforts, but no one could develop it into a useful product. Silver had found a solution, but he hadn't found a problem to solve it with. The breakthrough came when another 3M employee, Arthur Fry, got his inspiration. Art was a member of a church choir and used paper slips as bookmarks in the songbooks to identify the songs to be sung. Sometimes the paper would fly off and create problems. The idea of using Silver's adhesive to make a better bookmark came to him while singing in the choir.

The bookmark inspired him to think of other paper-to-paper applications in which only one of the sheets of paper was coated with the glue. The problem was that 3M did not have the equipment to do this, so management was not enthusiastic about Fry's application. Consequently Fry designed and built his own machine in his basement to manufacture the forerunner of the Post-it note. The machine was too large to get through his basement door, so he blasted a hole in the wall to get the machine to 3M. He then demonstrated the machine to management, engineers, salespeople, and production managers. His demonstration generated the enthusiasm to get management behind the project.

THINKING OUTSIDE YOUR CONE OF EXPECTATIONS

Thought is a process of fitting new situations into existing slots and pigeonholes in the mind. Just as you cannot put a physical thing into more than one physical pigeonhole at once, the processes of thought prevent you from putting a mental construct into more than one mental category at once. This is because the mind has a basic intolerance for ambiguity, and its first function is to reduce the complexity of its experiences.

When you come up with crazy or fantastical ideas, you step outside your cone of expectations and intentions — which is what happened to a manufacturer of dinner plates who had a problem with packaging. The plates were wrapped in old newspapers and packed in boxes. Every packer would eventually slow down to read the papers and look at the pictures. Most employees would drop to about 30 percent efficiency after a few weeks on the job.

The manufacturer tried using other material for packing, but that proved too expensive; the newspapers had been free. They tried using newspapers in different languages, but these were hard to obtain. They even offered incentives to workers to increase the number of plates wrapped, but without great success. Finally, one day in a meeting an exasperated supervisor said they should tape the workers' eyes shut so they couldn't read. This absurd comment created a lot of laughter as the others joked about his comment. But the supervisor had an "Aha!" moment: he got the idea to hire blind people to do the packing. The company not only greatly increased its packing efficiency but also received tax benefits for hiring the disabled.

MICHAEL MICHALKO is the author of Creative Thinkering, Thinkertoys, Cracking Creativity, and ThinkPak. While an army officer, he organized a team of NATO intelligence specialists and international academics to find the best inventive thinking method. He has expanded and taught these techniques to numerous Fortune 500 companies and organizations. He lives in Rochester, New York. Visit him online at http://www.CreativeThinking.net. 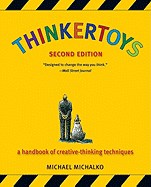 Thinkertoys: A Handbook of Creative-Thinking Techniques