It's Your Move: My Million Dollar Method for Taking Risks with Confidence and Succeeding at Work and Life

Josh Altman tells us why "It's not finished until it's finished."

You may know Josh Altman from the Bravo series Million Dollar Listing: LA. Now you can know get to know his a lot better, or for the first time, in his new book, It's Your Move: My Million Dollar Method for Taking Risks with Confidence and Succeeding at Work and Life. His publisher, HarperOne, sent along a great excerpt from Chapter 12 about Michael Strahan, Tom Sawyer, and getting the job done.


"It's Not Finished Until It's Finished"

Sometimes execution takes tenacity. Just because you can make a decision quickly doesn't mean you're going to be able to automatically get what you want. One of the ultimate examples of that for me was a lot Michael Strahan was developing in Bel Air.

First of all, Michael Strahan is a pretty amazing guy. Anyone who can go from fifteen years on the New York Giants to hosting a top-rated morning show is clearly a legend in the making. Michael bought a place in Bel Air for $9 million where he was going to build his dream home. He had the money to fulfill his vision, and he was going to spare no expense. Unfortunately, people who don't work in development all the time don't always realize the labyrinth of red tape that you have to go through before you can get even the most basic construction done. While Michael was busy running the world from New York, building his dream home was moving down the list of priorities. As six months turned into a year, I could see they hadn't broken ground. I talked to his agent to see if Michael might want to just get rid of the property. He said, "No." Michael was still committed to building the house.

After Michael had spent over a year trying to get his plans approved, his agent relayed to me that there was a small window to put this deal together. This guy has multiple full-time jobs on both coasts; he doesn't have time to be haggling with architects and designers, who can never agree on anything.

Turns out it's a lot easier to just buy a house.

I made an offer on the place. Michael said no. I held back, waited a month, and made another offer. I had a developer who was interested, knew the game, and could guarantee a nice profit on the place. I made another offer. I was bargaining against myself, but Michael wasn't looking to sell. I was going to have to convince him. I offered $11.2 million. Michael was done, and five months after I started pestering him, he took the offer. My developer had the place and Michael made a $2 million– plus profit without having to dig a piece of dirt.

Great deals usually aren't easy. They usually take time, commitment, and planning to execute. You can't just trust that stuff is going to take care of itself. You have to be part of the deal the whole way through.

Doing a job well enough doesn't impress anybody, including you. If you go through your life pursuing your decisions half-assed, the results are never going to be great, and you're going to lose your self-respect. Working hard is exhausting, yes, but it's the satisfied exhaustion of a job well done. If you treat your job as something to get through instead of something to excel at, you may have a bit more energy when you get home, but you won't have any sense of pride. It's the steps past just getting the job done that create new business. It's refusing to accept the limitations of mediocrity and knowing you have the capacity to create excellence. You might have a business, a job, or a relationship that feels like it's done. It's your duty to look at it and figure out if there's something you want to salvage, and if so, create a plan to give it new life. You may have a task at work that seems limited and simple.

If you do just that task and consider that to be enough and your job to be done, everyone you work with is going to think you're limited and simple. Figure out how you can actualize all the potential of any deal. Execution is more than a series of tasks to get something you want. It's falling in love with a deal and the possibilities that surround it. You remember when Tom Sawyer had to whitewash a fence? He talked loudly about how much fun it was to whitewash the fence, until some kids asked if they could help. He then convinced the kids to pay him money so they could have the chance to do his chore. That is, of course, genius-level salesmanship, but it's also getting the job done. Tom didn't just skip town or come up with a good excuse why he couldn't paint the fence. He looked at the job he had and found possibilities within it.

You don't have to swindle other people into doing your job for you. You need to swindle yourself and everyone around you into knowing that it is important to complete all aspects of a job. You have to fall in love with the details as much as you fell in love with the initial idea. It's a lot like Michael Strahan's house: You can't just come up with the plans for a really great house. You have to be fully committed to making your architect, planning commissioners, and contractors fall as much in love with the process as you are, and never stop until that dream house is built.

Excerpted from It's Your Move by Josh Altman
Published by HarperOne, an imprint of HarperCollins Publishers.
Copyright 2015 by Joshua Altman.
All rights reserved.

Josh Altman, real estate powerhouse of The Altman Brothers, is the top-producing agent at the famous Hilton & Hyland Brokerage and is ranked #22 in the country by the Wall Street Journal for having sales close to a billion dollars locally, nationally and internationally. He lives in Los Angeles, California. 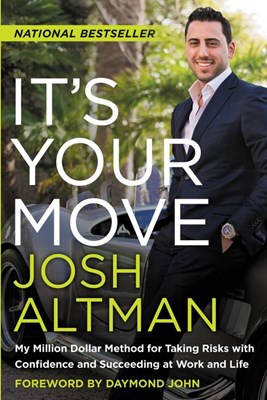 It's Your Move: My Million Dollar Method for Taking Risks with Confidence and Succeeding at Work and Life