Once a Warrior: An Excerpt

"Our communities face no shortage of problems, ranging from social division to income inequality to an increasing onslaught of natural disasters. If, as a nation, we issued a challenge to the three million men and women who have returned from tiresome wars in the Middle East to address these things, what might we unlock" —Jake Wood

Yesterday was Veteran's Day, a day to honor those who have served in our nation's armed forces. But what happens the day after, not just the day after the celebration of a holiday, but the day after they come home? Jake Wood's new memoir tells that story—his own story, that of veterans more broadly, and of the organization he formed to help them fulfill the sense of purpose they had while serving to uphold their oath to support and defend our constitution and protect our democracy.

As the book's jacket copy describes: 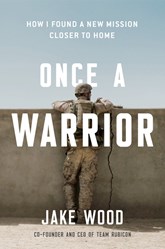 When Marine sniper Jake Wood arrived in the States after two bloody tours in Iraq and Afghanistan, he wasn’t leaving war behind him—far from it. Ten years after returning home, Jake’s unit lost more men to suicide than to enemy hands overseas. He watched in horror as his best friend and fellow Marine, Clay Hunt, plunged into depression upon returning, stripped of his purpose, community, and sense of identity. Despite Jake’s attempts to intervene, Clay died by suicide, alone.

Reeling, Jake remembered how only one thing had given Clay a measure of hope: joining him in Haiti on a ragtag mission to save lives immediately following the 2010 earthquake. His military training had rendered him unusually effective in high-stakes situations. What if there was a way to help stricken communities while providing a new mission to veterans?

In this inspiring memoir, Jake recounts how, over the past 10 years, he and his team have recruited over 130,000 volunteers to his disaster response organization Team Rubicon. Racing against the clock, these veterans battle hurricanes, tornados, wildfires, pandemics, and civil wars, while rediscovering their life’s purpose along the way.

Once a Warrior provides a gut-wrenching account of the true cost of our Forever Wars—and more importantly, a glimpse of what might become of America’s next greatest generation.

The excerpt below, reprinted with permission of the publisher, is the book's Preface.

There’s a saying in the military: Old soldiers never die; they simply fade away.

It’s poetic, but the lyricism belies an underlying sadness. What happens to a soldier after combat? In uniform they are admired and applauded, thanked as they walk through airports and toasted with beers at the local pub. But when our sons and daughters take off their uniforms for the last time, they often begin a long descent into obscurity. A higher calling lives on inside of them that no longer has a mission to pursue, and as they struggle to reintegrate, it’s more comfortable for the public to look away than to take responsibility. When most people think about veterans, they default to stereotypes—and to be honest, they aren’t far off. Old men, baseball caps announcing their combat campaigns perched on top of greying scalps, shuffling through crowds and feeling invisible, yearning for someone to thank them for their service. Or worse, haggard shells leaning against a brick wall, a cardboard sign propped on the sidewalk in front of them: Desert Storm Veteran—spare some change?

But what if we reframed what it means to be a veteran? What if instead of allowing our sons and daughters to simply fade away, we asked them to come home and build a legacy that would strengthen the foundation of our nation? Our communities face no shortage of problems, ranging from social division to income inequality to an increasing onslaught of natural disasters. If, as a nation, we issued a challenge to the three million men and women who have returned from tiresome wars in the Middle East to address these things, what might we unlock?

The stakes are high. My unit took some of the highest casualties of the wars during our time in both Iraq and Afghanistan. Yet when we returned home, we lost more men to their own hand than to the enemy overseas. Since 2012, more service members have died by suicide than in combat.*

* Carol Giacomo, “Suicide Has Been Deadlier Than Combat for the Military,” New York Times, November 11, 2019.

It’s a stunning statistic and a sobering rebuke—and many Americans have never heard it. This epidemic cannot be fully explained with clinical diagnoses of post-traumatic stress disorder. To understand, we must look more broadly to the dearth of purpose and self-worth some veterans experience upon return. Many enter communities that care little about their sacrifice and choose to treat them like liabilities, rather than the assets they are. The local minor-league baseball team will disguise a returning veteran as the mascot and surprise her family with a crowd-pleasing public reunion—an overplayed scene that gets local news anchors to peddle tropes about heroism and sacrifice. Yet that same veteran will walk from local business to local business begging for a job in management, only to be told that she lacks experience. Never mind that she commanded a supply company of two hundred soldiers tasked with making daily runs to far-flung forward operating bases along highways riddled with IEDs.

Think about that for a moment. Imagine our country recruited you out of high school and invested hundreds of thousands of dollars into your training. We give you a uniform and a rifle and a rank. Perhaps most importantly, we give you a mission and a band of brothers and sisters that would do anything for you. We send you to war, where you fight for our flag, and, perhaps for the first time in your life, it feels like your existence matters. You execute a difficult job in impossible circumstances, gaining experience and confidence. You come home and we pin a medal on your chest and cheer for you at stadiums and arenas. But eventually that ends and your time in uniform is done. You take it off for the last time and the Army hands you a piece of paper and says, “Good luck, soldier.” But before they’ve even finished wishing you good luck, they’ve turned their attention to the next body in a uniform, because they have a war to win. You walk off base and into your next chapter, eager and maybe a little scared. One thing is certain: your mission, community, and sense of identity have faded.

Stripped of this scaffolding, you might begin to feel listless and alone and fear that you are sinking like a battleship to the bottom of a harbor. Memories of the friends killed alongside you reoccur in your dreams. Perhaps you’re plagued by a sense of failure after seeing the cost in blood and treasure of the U.S. military intervention in Iraq and Afghanistan while some of our communities at home rot in front of us. Despite having served more than most, you feel you still have a debt to pay.

What’s more, civilian life confounds and frustrates you. Were people always so self-involved? Instead of protecting life and liberty, you’re supposed to muster enthusiasm for socializing with your coworkers with an eye toward that promotion. But this new set of norms feels like a step in the wrong direction. It’s hard to form bonds with people who are more interested in greasing the wheels of their career than forming a real brotherhood. You knew your fellow soldiers would die for you; you’re fairly sure these people would plant their Italian loafer on your back as they stepped over you onto the ladder’s next rung.

But there is hope in this battle. We can reignite a sense of purpose in our veterans by providing them a new mission that rivals their wartime sense of duty. In the decade since I’ve left the Marine Corps, I have seen countless men and women become better versions of themselves by serving with Team Rubicon in disaster zones around the world and here at home. Through this continued service, they have found within themselves an immutable sense of purpose and a tightly knit tribe. They gain these things not by focusing on themselves, but by turning their focus outward—on others. They don Team Rubicon’s iconic grey uniform and help their neighbors restore order amid chaos. The mission gives them hope that their best days are before them, not rusting at the bottom of the sea, as they’d feared.

Once a Warrior explores both the harrowing cost of military service and the path to healing upon return. On the most basic level, it’s my memoir of returning from two bloody tours in Iraq and Afghanistan, founding Team Rubicon with no money or experience, and mobilizing over one hundred thousand volunteers to help communities on their worst day. On a higher level, this is the story of America’s veterans and the battles they continue to fight. Some prevail; others do not.

I refuse to believe we are destined to fade into nothingness. Instead, our wartime experience should serve as the prologue to long, fulfilling lives, propelling us forward to become beacons of strength and leadership in our communities. Our nation finds itself in a battle for the narrative that will define an entire generation of men and women sent to fight. Will we tell them that they are pitiful, empty shells of their former selves? Worthy of our sympathy and charity, but not capable of leading us? Or will America slam its gauntlet onto the table and issue a challenge—one that inspires this generation and flips the narrative, recognizing veterans as our best bet in restoring the America we love?

Excerpted from Once a Warrior by Jake Wood.
Copyright 2020 by Jacob Andrew Wood.
Published by Sentinel, an imprint of Penguin Random Hoiuse LLC.
All rights reserved.

Jake Wood is the cofounder and CEO of Team Rubicon, a disaster relief organization with over 70,000 veteran volunteers. Wood had previously spent four years in the Marine Corps, serving in Afghanistan and Iraq. Since founding Team Rubicon in 2010, Jake has built the organization into one of the United States’ most celebrated nonprofits. This is his first book. Follow Team Rubicon on Twitter and Instagram @TeamRubicon. Learn more at teamrubiconusa.org. 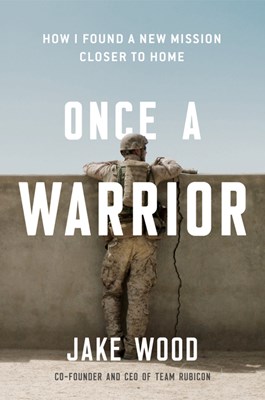 Once a Warrior: How One Veteran Found a New Mission Closer to Home 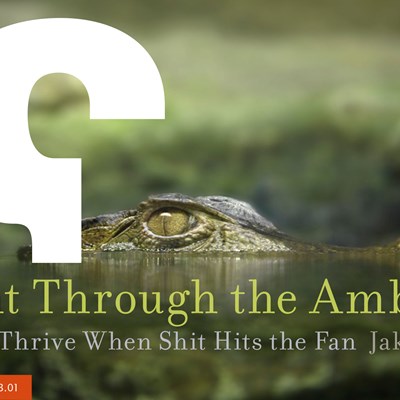 Fight Through the Ambush: How to Thrive When Shit Hits the Fan