Platform Revolution: How Networked Markets Are Transforming the Economy—And How to Make Them Work for You

Geoffrey G. Parker, Marshall Van Alstyne, and Sangeet Paul Choudary explain how the platform revolution is transforming the world as we know it and the work we do & and are able to do—along the way.

Excerpt from Chapter 1 of Platform Revolution:
How Networked Markets Are Transforming the Economy
and How to Make Them Work for You
By Geoffrey G. Parker, Marshall Van Alstyne, and Sangeet Paul Choudary
(W.W. Norton; March 28, 2016)

Welcome to the Platform Revolution

In October 2007, a tiny item appeared in an online newsletter aimed at industrial designers—men and women who shape the appearance of everything from coffee makers to jumbo jets.  It referred to an unusual housing option for professionals who planned to attend the upcoming joint convention of two industrial design organizations—the International Congress of Societies of Industrial Design (ICSID) and the Industrial Designers Society of America (IDSA):

If you're heading out to the ICSID/IDSA World Congress/Connecting '07 event in San Francisco next week and have yet to make accommodations, well, consider networking in your jam-jams. That's right. For "an affordable alternative to hotels in the city," imagine yourself in a fellow design industry person's home, fresh awake from a snooze on the ol' air mattress, chatting about the day's upcoming events over Pop Tarts and OJ.

The hosts for this “networking in your jam-jams” opportunity were Brian Chesky and Joe Gebbia, budding designers who’d moved to San Francisco only to find they couldn’t afford the rent on the loft they shared.  Strapped for cash, they impulsively decided to make air mattresses and their own services as part-time tour guides available to convention attendees who’d been unable to find a room at one of the city’s hotels.  Chesky and Gebbia attracted three weekend guests and made a thousand bucks, which covered the next month’s rent.

Their casual space-sharing experience would launch a revolution in one of the world’s biggest industries.

Chesky and Gebbia recruited a third friend, Nathan Blecharczyk, to help them make affordable room rentals a long-term business.  Of course, renting space in their San Francisco loft wouldn’t yield much revenue.  So they designed a website that allowed anyone, anywhere to make a spare sofa or guest room available to travelers.  In exchange, the company—now dubbed Air Bed & Breakfast (Airbnb), after the air mattresses in Chesky and Gebbia’s loft—took a slice of the rental fee.

The three partners started out focusing on events for which hotel space was often sold out, scoring their first big hit at the 2008 South by Southwest festival in Austin.  But they soon discovered that demand for friendly, affordable accommodations provided by local residents existed year-round and nation-wide—and even internationally.

Today, Airbnb is a giant enterprise active in 119 countries, where it lists over 500,000 properties ranging from studio apartments to actual castles in the countryside and has served over ten million guests.  In its last round of investment funding (April 2014), the company was valued at more than ten billion dollars—a level surpassed by only a handful of the world’s greatest hotel chains.

In less than a decade, Airbnb has siphoned off a growing segment of customers from the traditional hospitality industry—all without owning a single hotel room of its own.

It’s a tale of dramatic, unexpected change.  Yet it’s only one in a series of improbable industry upheavals that share a similar DNA:

How can a major business segment be invaded and conquered in a matter of months by an upstart with none of the resources traditionally deemed essential for survival—let along market dominance?  And why is this happening today in one industry after another?

The answer is the power of the platform—a new business model that uses technology to connect people, organizations, and resources in an interactive ecosystem in which amazing amounts of value can be created and exchanged.  Airbnb, Uber, Alibaba, and Facebook are just four examples from a list of disruptive platforms that includes Amazon, YouTube, eBay, Wikipedia, iPhone, UpWork, Twitter, Kayak, Instagram, Pinterest, and dozens more.  Each is unique and focused on a distinctive industry and market.  Yet each has harnessed the power of the platform to transform a swath of the global economy.  And many more comparable transformations are on the horizon.

The platform is a simple-sounding yet transformative concept that is radically changing business, the economy, and society at large.  As we’ll explain, practically any industry in which information is an important ingredient is a candidate for the platform revolution.  That includes businesses whose “product” is information (like education and media) but also any business where access to information about customer needs, price fluctuations, supply and demand, and market trends has value—which includes almost every business.

So perhaps it’s no wonder that the list of fastest-growing global brands is increasingly dominated by platform businesses. In fact, in 2014, three of the world’s five largest firms as measured by market capitalization—Apple, Google, and Microsoft—all run platform business models.  One of these, Google, debuted as a public company in 2004.  Another, Apple, nearly went bankrupt a few years earlier—when it still ran a closed business model rather than a platform.  Now incumbent giants from Walmart and Nike to John Deere, GE, and Disney are all scrambling to adopt the platform approach to their businesses.

The disruptive power of platforms is also transforming the lives of individuals in ways that would have been impossible a few years ago:

Teacher or lawyer, photographer or scientist, plumber or therapist—no matter what kind of work you do, the chances are good that a platform is poised to transform it, creating new opportunities and, in some cases, daunting new challenges.

The platform revolution is here—and the world it is ushering in is here to stay.

Sangeet Paul Choudary is the founder of Platform Thinking Labs and a C-level advisor to executives globally on platform business models. He is an Entrepeneur-in-Residence at the INSEAD Business School and a Fellow at the Centre for Global Enterprise. He also writes the popular blog Platform Thinking (platformed.info), recommended as a must-read by the Wall Street Journal, and his work has been featured on the Harvard Business Review, MIT Technology Review, and Wired. He is a frequent keynote speaker at leading conferences, including the G20 World Summit 2014 events.

Marshall W. Van Alstyne is a professor at Boston University and a visiting scholar and research fellow at the MIT Initiative on the Digital Economy. Van Alstyne is a world expert on information economics and has made fundamental contributions to IT productivity and to theories of network effects. His coauthored work on two-sided networks is taught in business schools worldwide. In addition, he holds patents in information privacy protection and on spam prevention methods. Van Alstyne has been honored with six best paper awards and National Science Foundation IOC, SGER, iCORPS, SBIR and Career Awards. He is an adviser to leading executives, a frequent keynote speaker, a former entrepreneur, and a consultant to startups and to Global 100 companies. He received his BA from Yale and his MS and PhD from MIT.

Geoffrey G. Parker is a professor of engineering at Dartmouth College (effective July 2016) and has been a professor of management science at Tulane University since 1998. He is also a visiting scholar and research fellow at the MIT Initiative for the Digital Economy. Before joining academia, he held positions in engineering and finance at General Electric. He has made significant contributions to the economics of network effects as co-developer of the theory of two-sided networks. Parker's work has been supported by the Department of Energy, the National Science Foundation, and numerous corporations. Parker advises senior leaders in government and business and is a frequent speaker at conferences and industry events. He received his BS from Princeton and his MS and PhD from MIT. 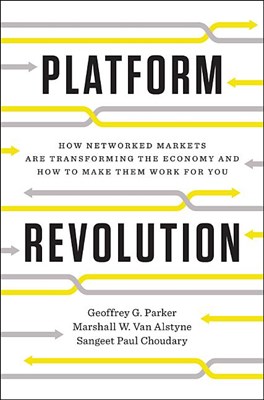 Platform Revolution: How Networked Markets Are Transforming the Economy and How to Make Them Work for You