The 50th Anniversary of Peter Drucker's seminal book is being released today.

There is not much I could say about Peter Drucker that hasn't been said. He is the father of management. He is the only solo with two books featured in The 100 Best Business Books of All Time, and The Effective Executive is the third book reviewed. Todd Sattersten wrote in that review: Time. Strengths. Contribution. Concentration. Decision-making. Each of these subjects have been covered in myriad works since Drucker first addressed them in The Effective Executive, but his book stands alone as an indispensable handbook for the leader, covering the topics at just the right level of detail and from just the right perspective to enable action. The book can serve as both starting point for the novice, or a firm reminder for the experienced, that our labor is not about doing things, but rather doing the right things.

But just like many great management thinkers that came behind him, his ideas on the topic were more broad-ranging. He thought good management was essential not only to a well run business, but a well lived life, and so much more. "In the Drucker Perspective" Rosabeth Moss Kanter once wrote, "Good management is also our best hope for world peace." That is a tall order, and yet seems so perfectly obvious, as well. And it all starts with managing oneself, which is what The Effective Executive is all about. "That one can truly manage other people," Drucker writes in the Preface, "is by no means adequately proven. But one can always manage oneself."

In the excerpt from the 50th Anniversary edition of the book below (being released today by Harper Business), you'll find that one key to that is managing your expectations of others in your charge, in knowing and accepting limitations while still embracing…

The Promise of Effectiveness

Increasing effectiveness may well be the only area where we can hope significantly to raise the level of executive performance, achievement, and satisfaction.

We certainly could use people of much greater abilities in many places. We could use people of broader knowledge. I submit, however, that in these two areas, not too much can be expected from further efforts. We may be getting to the point where we are already attempting to do the inherently impossible or at least the inherently unprofitable. But we are not going to breed a new race of supermen. We will have to run our organizations with men as they are.

The books on manager development, for instance, envisage truly a “man for all seasons” in their picture of “the manager of tomorrow.” A senior executive, we are told, should have extraordinary abilities as an analyst and as a decision-maker. He should be good at working with people and at understanding organization and power relations, be good at mathematics, and have artistic insights and creative imagination. What seems to be wanted is universal genius, and universal genius has always been in scarce supply. The experience of the human race indicates strongly that the only person in abundant supply is the universal incompetent. We will therefore have to staff our organizations with people who at best excel in one of these abilities. And then they are more than likely to lack any but the most modest endowment in the others.

We will have to learn to build organizations in such a manner that any man who has strength in one important area is capable of putting it to work (as will be discussed in considerable depth in Chapter 4  … ). But we cannot expect to get the executive performance we need by raising our standards for abilities, let alone by hoping for the universally gifted man. We will have to extend the range of human beings through the tools they have to work with rather than through a sudden quantum jump in human ability.

The same, more or less, applies to knowledge. However badly we may need people of more and better knowledge, the effort needed to make the major improvement may well be greater than any possible, let alone any probable, return.

Fifteen years ago when “operations research” first came in, several of the brilliant young practitioners published their prescription for the operations researcher of tomorrow. They always came out asking for a polymath knowing everything and capable of doing superior and original work in every area of human knowledge. According to one of these studies, operations researchers need to have advanced knowledge in sixty-two or so major scientific and humanistic disciplines. If such a man could be found, he would, I am afraid, be totally wasted on studies of inventory levels or on the programming of production schedules.

Much less ambitious programs for manager development call for high knowledge in such a host of divergent skills as accounting and personnel, marketing, pricing and economic analysis, the behavioral sciences such as psychology, and the natural sciences from physics to biology and geology. And we surely need men who understand the dynamics of modern technology, the complexity of the modern world economy, and the labyrinth of modern government.

Every one of these is a big area, is indeed, too big even for men who work on nothing else. The scholars tend to specialize in fairly small segments of each of these fields and do not pretend to have more than a journeyman’s knowledge of the field itself.

I am not saying that one need not try to understand the fundamentals of every one of these areas.

One of the weaknesses of young, highly educated people today—whether in business, medicine, or government—is that they are satisfied to be versed in one narrow specialty and affect a contempt for the other areas. One need not know in detail what to do with “human relations” as an accountant, or how to promote a new branded product if an engineer. But one has a responsibility to know at least what these areas are about, why they are around, and what they are trying to do. One need not know psychiatry to be a good urologist. But one had better know what psychiatry is all about. One need not be an international lawyer to do a good job in the Department of Agriculture. But one had better know enough about international politics not to do international damage through a parochial farm policy.

This, however, is something very different from the universal expert, who is as unlikely to occur as the universal genius. Instead we will have to learn how to make better use of people who are good in any one of these areas. But this means increasing effectiveness. If one cannot increase the supply of a resource, one must increase its yield. And effectiveness is the one tool to make the resources of ability and knowledge yield more and better results.

Effectiveness thus deserves high priority because of the needs of organization. It deserves even greater priority as the tool of the executive and as his access to achievement and performance.

Peter F. Drucker (1909–2005) wrote more than thirty-five books, and his ideas have had an enormous impact on shaping the modern corporation. In 2002, he was awarded the Presidential Medal of Freedom. He is considered the most influential management thinker ever. 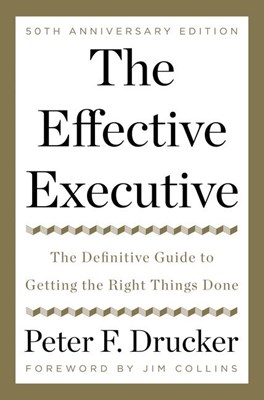