Think Big, Act Bigger: The Rewards of Being Relentless

Jeffrey Hayzlett tells you to think big and act bigger, because you can. "The Secret to Success is...There is No Secret!"

In his new book, Think Big, Act Bigger: The Rewards of Being Relentless, Jeffrey Hayzlett talks hard work and Thinking Big and Acting Bigger—Because you Can.

I had been Chief Marketing Officer (CMO) at a Fortune 100 company for several years when I left to build my personal brand as a speaker, strategic business consultant, and media personality. I had spent my years as a CMO fighting against deep-seated "big company" limitations and was looking forward to getting back to the wide-eyed optimism, control, intimacy, and seemingly endless possibilities of being an entrepreneur. I wanted to build a dynamic, nimble business with just a small team that I could guide anywhere I wanted to go.

I wanted to build my brand first online, so I told my team, "Go find out what I need to do to boost my social media presence by 25,000 fans on Facebook and Twitter as quickly as possible. Give me a plan for what I need to do, from increasing visibility to buying ads."

They came back to me and said they could get only 15,000 fans on each.

"But I never gave you a budget! I just asked you to tell me what it would take to get where we needed to go."

From my years as a successful small-businessman in printing, marketing, and business development in South Dakota, through my time as the CMO of that Fortune 100 company, and into my current work as a speaker, bestselling author, host of a national TV show, and creator of the C-Suite Network, people have asked me one question more than any other: "Jeff, how did you do it?" My answer is: "I think big and act bigger." I'm a cowboy from Sioux Falls who worked his way up through businesses small and large to win on the national level. In fact, I win all the time, and my ability to think big and act bigger has been the key to my success.

Napoleon Hill's classic book Think and Grow Rich has taught millions of us that thinking is the first step in achieving. But acting bigger is the key to achieving bigger. Acting bigger means tying visions to actions—getting beyond the stories and excuses, the self-imposed limitations, preconceived notions, and constraining structures—and becoming the biggest, baddest, best version of who you are and what you want to be. The most dangerous move in business is the failure to make a move that delivers on a promise to be that "you." The history of modern business is filled with companies that no longer exist because their leaders refused to adapt and change until it was too late. Kodak thought it was still in the film business and ignored its own proprietary work on the digital camera. BlackBerry thought its brand-named communication method could stem the need to innovate. Oldsmobile just got old with its customers, and when they started to die, so did the brand.

Most people seem to understand this on some level. So why do so many of us think small and act smaller? Why do so many smart entrepreneurs, business owners, managers, and leaders (not to mention parents and partners) fail to act bigger even when they think that way? Lots of reasons: They aren't sure what they really want; they aren't sure they can get what they really want; they are scared or doubtful and think that if they don't know how to get somewhere, it isn't going to happen; and, most important, they lack the right attitude to own who they are.

Thinking big and acting bigger is all about action and attitude: being fearless and bold, steamrolling obstacles, ignoring perceived limitations, and even being a little irrational and pigheaded at times. I've learned it is about being relentless in all I do but especially trusting in who I am because I can.

My attitude is always about owning who I am in everything I do: Sell me, sell the company; sell the company, sell me. When people hire me and say, "Make it like it used to be," I say, "No. You can't go back, and I don't want to." I don't look the way I did when I was 20; I look better. Sure, I have lost some hair, but I also lost any doubt as to who I am. I have gained some weight, but I have also gained experience, character, and worldliness that make me better than I ever have been. Simply put, I am all that I say you should be: fearless, bold, and relentless. That's not arrogance, that's awareness—that's an attitude that says, "I own who I am!"

All the things I will tell you in this book about thinking and acting big in all you do—leading, connecting, relating, focusing, adapting—are virtually meaningless if you don't know who you are. I don't care if you are a business of one or two people, an entrepreneur with devoted followers, or a leader at an established business. Maybe you are struggling to overcome ongoing obstacles. Maybe you are pushing to get to the next level and persuade your people to help you get there. Maybe you are working in a rapidly growing business, trying to deliver on your brand promise and enact visions you believe in. Regardless of your business situation, it is essential that you know who you are and allow that understanding to guide your business.

It doesn't matter who or what you are, what your situation is, or what industry you're in, just like it didn't matter if I was in the mahogany boardroom of that Fortune 100 company or in the corner of my living-room startup; the limitations I faced exist everywhere. That's what I had missed that day when my team came back to me with their plans: I knew I could succeed, but that didn't automatically mean they did. Thinking big was one thing; acting big is another. Why do we let preconceived notions, structures, and differences prevent our businesses and us from delivering for the future? We must get ourselves and our people beyond the stories that limit us and learn new ones that expand our possibilities. Those old voices inside our heads give us every excuse in the world for not doing something. Breaking free from them is hard work that starts with three words: because I can.

Do you believe you can? That's the first of many essential questions you must ask to think big and act bigger. Asking these questions and telling new stories that lead to more possibilities, profit, and purpose-driven lives sounds so easy, right? So why do we keep falling into stories that lead in the opposite direction? Because those stories are very powerful. In fact, the easiest thing to do is to keep telling stories that shut us down, that absolve us of responsibility and accountability, that stifle innovation and investigation, that play it safe.

Think about the greatest athletes—not the superstars constantly in the spotlight with otherworldly skills, smarts, and strength, but the thousands of others who make up the teams they play on. They also believe they can win all the time, no matter how impossible it may seem. They believe in who they are. They don't just think they are better; they act bigger for themselves and for the team. That's what I do too—because I can.

Truth is, anyone can do this. If I can, you can, too. You can do it because you can. Not can't: can. Saying "I can't" is about excuses, not action—apathy, not attitude. Remember: Stories are powerful. We live for them every day. We look to them to inform the most mundane and important decisions we make, from the food we eat to the clothes we wear to the jobs we take, so we can feel good about our decisions. But what about our stories? We live in our stories, and yet we fail to see how they are holding us back. Let's attack and rewrite the stories that prevent us from owning who we are. Let's put new voices inside our heads that say, "I can think big, act bigger, and do it my way—because I can."

Excerpted from Think Big, Act Bigger: The Rewards of Being Relentless by Jeffrey Hayzlett
2015 by Entrepreneur Media, Inc.
All reghts reserved.

Jeffrey is a leading business expert, cited in Forbes, SUCCESS, Mashable, Marketing Week and Chief Executive, among many others. He shares his executive insight and commentary on television networks like Bloomberg, MSNBC, Fox Business, and C-Suite TV. Hayzlett is a former Bloomberg contributing editor and primetime host, and has appeared as a guest celebrity judge on NBC's Celebrity Apprentice with Donald Trump for three seasons. He is a turnaround architect of the highest order, a maverick marketer and C-Suite executive who delivers scalable campaigns, embraces traditional modes of customer engagement, and possesses a remarkable cachet of mentorship, corporate governance, and brand building. 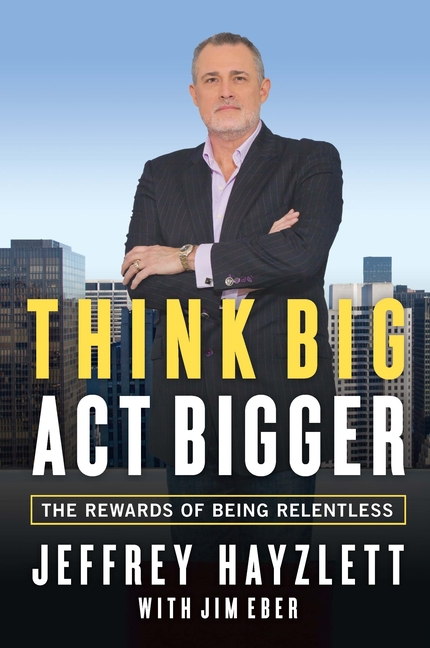 Think Big, Act Bigger: The Rewards of Being Relentless 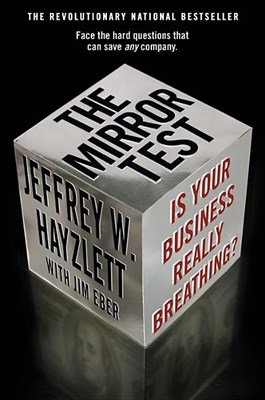 The Mirror Test: Is Your Business Really Breathing?