Ian Bremmer's new book is a great resource for making sense of the present political moment, for understanding what has prompted the rise of populism and backlash against globalism. If you follow the news, you most likely know who Ian Bremmer is. The foreign affairs columnist and editor-at-large at TIME magazine is a frequent media contributor. I think he may be the closest thing the field of political risk has to a rock star. The consultancy he founded, The Eurasia Group, is not only the world's largest political risk consultancy—with offices in seven cities on four separate continents—it is responsible for pioneering the field, and for bringing the study of political science more widely to bear in assessments of risk in financial markets.

Bremmer is also a prolific author. I once wrote here of his previous books that: "The J Curve: A New Way to Understand Why Nations Rise and Fall was a critical success, selected by The Economist as one of the best books of 2006, and got him on some of the cable talk shows, but The End of the Free Market turned into a national bestseller. I mean, here was a nuanced and wonky text by the founder of a political risk consultancy about the growing schism between free markets and state capitalism around the world, and where on that continuum states around the world fall, that forecast a potential economic showdown between the two systems—pretty heady, dense material—and it was a hit! People ate it up. To call its success a surprise is probably an understatement."

His new book, Us vs. Them: The Failure of Globalism, released last week by Portfolio, is sure to be even bigger. It is a great resource for making sense of the present political moment, for understanding what has prompted the rise of populism—not just here in the States, but around the world. He addresses the fears and failures of, the frustration with and backlash against globalism. He writes directly about the dangers of the political demagogues who play to that fear and frustration, but also about the danger of dismissing their supporters instead of understanding their concerns, and how globalism has failed to address them—even exacerbating them in many instances.

The team at Portfolio was kind enough to provide an excerpt from the Introduction, which roots the book in Bremmer's own experience to get you started.

Why do Palestinians throw rocks? To attract attention? To improve their lives? To make progress toward creation of a Palestinian state? They throw rocks because they want others to see that they’ve had enough, that they can’t be ignored, and that they can break things. Voting isn’t helping them. Outsiders don’t care. Where are the opportunities to bring about change? There is nothing left but to throw rocks.

In that sense, there will soon be Palestinians all over the world. Workers everywhere fear lost jobs and wages as a shifting global economy and technological change leave them behind. Citizens fear surging waves of strangers who alter the face and voice of the country they know. They fear terrorists and criminals who kill for reasons no one can understand. They fear that government cannot or will not protect them. Gripped by anxiety, they get angry. To make themselves seen, heard, and felt, they start to throw rocks.

Then the call for help is answered. Donald Trump tells an excited overflow crowd that he sees them, that he sees their enemies, and that only he can take them (back) to the promised land. Senators Elizabeth Warren and Bernie Sanders tell cheering fans that big corporations and Wall Street banks are robbing them blind. Champions of Brexit tell voters they must reclaim Britain’s borders and reject laws and rules imposed by Europeans. European populists tell followers they will lead the charge of patriots against foreigners and globalists.

These leaders aren’t arguing that government should be bigger or smaller, that it should tax less or spend more. They’re challenging the right of “elites” to make the rules that govern our lives. They tell citizens they’ve been cheated of their chance to succeed, and that the media is in on it. They promise to comfort the afflicted, afflict the comfortable, and burn down the houses of power.

We can attack these populists, mock them, or dismiss them, but they know something important about the people they’re talking to, and they understand that many people believe that “globalism” and “globalization” have failed them. These wouldbe leaders have a talent for drawing boundaries between people. They offer a compelling vision of division, of “us vs. them,” of the worthy citizen fighting for his rights against the entitled or grasping thief. Depending on the country and the moment, “them” may mean rich people or poor people, foreigners or religious, racial, and ethnic minorities. It can mean supporters of a rival political party or people who live in a different part of the country. It can mean politicians, bankers, or reporters. However applied, it’s a tried- and- true political tool.

Us vs. Them is not about the rocks or the damage they do on impact. Rocks are expressions of frustration. They don’t solve problems. Instead, we must look more closely at the deeper sources of these frustrations, at how governments around the world are likely to respond to them, and how political leaders, institutions, companies, schools, and citizens can work together to make things better.

There was no wealth where I grew up in Chelsea, Massachusetts, but from my childhood street you could see it in Boston’s green and gold skyline. I had no idea what went on inside those towers, but they had my attention. How do you get from here to there, I wondered? When my high school offered a program called “Teach a Kid How America Works,” I leaped at the chance to join. We junior achievers put on our coats and ties, headed downtown, up the crowded streets, past the men in suits, through the tall glass doors, up the quiet elevator before gliding to a silent stop, waiting, and stepping into the place where the executives worked. I think it was a bank. It had the deepest carpet I’d ever seen.

Then we were ushered in for an audience with Tim, a man who seemed genuinely glad to meet us. He had a strong handshake, and he looked at me like he was really looking at me. “Would you like to work here?” he asked the group. One of us said yes and the rest nodded in agreement. “Nobody’s stopping you, and don’t let anyone tell you otherwise. If you want to be successful, you just have to study hard and work hard. It’s totally up to you.” He believed it, so I did too.

He was right. From the projects, I earned a college scholarship and then a PhD, got an idea, launched a company, made money, got on TV, and wrote books. A kid born on the hard edge of a great American city, the child of a single mother (my dad died when I was four) who, with uncommon singleness of purpose, walked two boys past every trap and pushed us toward success. One small example of the American dream.

As a young adult, the American dream came wrapped in a package of “globalism,” a belief in universal interdependence and international exchange that seemed to provide paths to prosperity for both the poor boy I was and the successful man I hoped to become. Globalism seemed a generous choice; it’s the game everyone can win. Embrace capitalism, lower the walls, hire, build, and expand. People who’ve made it, or who believe they’ll get a fair shot, are drawn to globalism. I devoted my professional life to it. Why not? The system worked for me, and it has lifted hundreds of millions around the world from poverty. Why can’t it one day work for everyone?

It didn’t, and it hasn’t. An early counterexample came with the rioting at the 1999 meeting of the World Trade Organization, where what began as a peaceful, well-organized, pro-labor protest became a magnet for anticorporate, antinuclear, anti-what-elseyagot anarchist street theater, and then a running battle between kids dodging rubber bullets and cops dodging rocks. Globalists didn’t pay much attention. In retrospect, it was a warning sign.

In 2008, years of deregulation, bad bets, and bad faith brought down some of the world’s biggest banks, sending shock waves around the world. Next came the Occupy Wall Street movement, leaving bankers worried that the vagrants might get violent. The World Economic Forum at Davos that year was fascinating. No one knew how bad things would get for the global economy or what would happen next. But then came the bailouts for banks, which stabilized the markets. China’s leaders injected billions to keep China’s economic engine humming, the world’s elites went back to business, and Wall Street’s occupiers went home.

The Arab world’s aborted revolutions got our attention, and the refugee crises it triggered brought them closer to home, but it wasn’t until Britain voted to leave the European Union that the indictment of globalism became unavoidably obvious. Then Donald J. Trump was elected president of the United States.

Today, the watchword is inequality. We have always known the world remained an unfair place, but most of the world’s elites believed, with plenty of evidence, that globalism was the solution, not the problem. But while the elites convene for debate, more people are getting frustrated.

Back in Chelsea, in my old neighborhood, people are angry. They no longer believe that hard work and education are enough. They don’t see a path, and they feel they’ve been lied to. For decades. My brother voted for Donald Trump, and if my mother were alive, I bet she would have too. She certainly wouldn’t have voted for anyone who has spent any time in Washington over the past thirty years. The anger is becoming more obvious—in Appalachia, in Gaza, in Latin America, in North Africa, and in Eastern Europe.

Excerpted from Us vs. Them: The Failure of Globalism by Ian Bremmer,
in agreement with Portfolio, an imprint of Penguin Publishing Group, a division of Penguin Random House LLC.
Copyright © Ian Bremmer, 2018.
All rights reserved.

Ian Bremmer is the president and founder of Eurasia Group, the leading global political risk research and consulting firm. He has published ten books, including Superpower and the national bestsellers The End of the Free Market and Every Nation for Itself. He lectures widely and writes a weekly foreign affairs column for TIME magazine, where he’s editor at large. He lives in New York City. 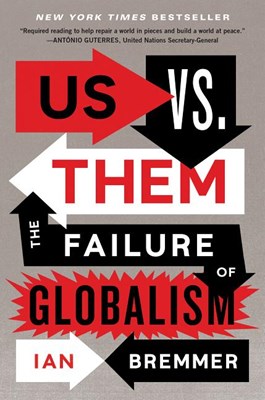