The first major biography of P.T. Barnum in a generation, a vivid account of the forefather of American entertainment. 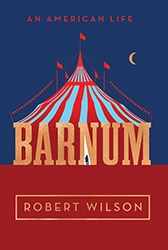 The jacket copy on Robert Wilson's Barnum: An American Life states that "Wilson adeptly makes the case for P.T. Barnum's place among the icons of American history, as a figure who represented, and indeed created, a distinctly American sense of optimism, industriousness, humor, and relentless energy."

Phineas Taylor Barnum was a complicated figure. The self-proclaimed “Prince of Humbugs,” also wrote that “The greatest humbug of all is the man who believes—or pretends to believe—that everything and everybody are humbugs.” First of all, I'd like to suggest that we don't use the word humbug often enough anymore. And, according to Wilson, Barnum's use of humbuggery in practice was not only mostly harmless, it was assumed that those participating in it were in on the joke.

“I don’t believe in ‘duping the public,” he wrote in a letter in 1860, “but I believe in first attracting and then pleasing them.”

In the excerpt from the book's Introduction below, Wilson explains why Barnum's reputation as a merchant of deceptions is not only incomplete, but—in the final account of his life—unfair.

Well after his death in 1891, his image in the public mind congealed around another phrase, this one attributed to Barnum himself: “There’s a sucker born every minute.” The cynical saying implies that he was no better than a huckster, whose chief goal was using fast talk to trick people out of their money while giving them nothing in return. Even to this day, these words serve as shorthand for Barnum’s philosophy as a showman, but no evidence exists that he ever spoke or wrote them. What’s worse, they utterly misrepresent the man as he really was.

The actual arc of Barnum’s life is much more interesting, and much more consequential, than his present-day reputation suggests. He may have begun his career as a promoter of sketchy acts in a business that was often considered less than respectable, but he changed both himself and the business over the decades, earning the respect of Americans of every station. Because he had so determinedly placed himself in the public eye, people knew all about his early missteps as well as his successes—his “struggles and triumphs,” as the title of a later version of his autobiography puts it. He didn’t hesitate to show his flaws, but he would also reveal in time that he was that rare thing, a man who was steered by his ideals, becoming a better person as he navigated a long lifetime. Over many years, Barnum became a steady, civic-minded, fun-loving man who cultivated a close relationship with his audience and embodied many of the best aspects of the American character. He eventually won over the public with his unflagging energy, his wit and buoyant good humor, his patriotic zeal for the Union side in the Civil War, and his commitment to charitable causes, good government, and his Universalist faith.

He is known today primarily for his connection to the circus, but that came only in the last quarter of his long life. His principal occupations before that were running the American Museum and being the impresario behind the witty and talented dwarf Tom Thumb, the angelic Swedish soprano Jenny Lind—who created a sensation in America in the early 1850s—and dozens of other acts and traveling shows. Less well known today is that he was also a best-selling author, an inspirational lecturer on temperance and on success in business and in life, a real-estate developer, a builder, a banker, a state legislator, and the mayor of the city of Bridgeport, Connecticut, near or in which he lived for most of his adult life. He was even a candidate for Congress, losing a bare-knuckle contest to a cousin also named Barnum. In all of these endeavors he was a promoter and self-promoter without peer, a relentless advertiser and an unfailingly imaginative concoctor of events or exhibits to draw the interest, often the feverish interest, of potential patrons.

Throughout his life, Barnum worked steadily to transform the image of public entertainment in America. In the long middle of his career, his American Museum included what he called a Lecture Room, where, in addition to lectures, both dramas and melodramas were presented. At the time, theaters were not considered morally or even physically safe places for children and families. Prostitutes often plied their trade in the balconies, and sobriety was not much in evidence even in the orchestra seats. But Barnum enforced an environment in both the museum and the Lecture Room that was free of drunkenness, improper behavior, and anything else that could give offense to people whose scruples might otherwise keep them away. He emphasized the moral quality of his dramas and the safety of his exhibit spaces, ensuring that customers of all ages could enjoy them. Later he and his partner James A. Bailey brought this same commitment to the rough-and-tumble world of the traveling circus, presenting entertainment that even Barnum’s many preacher friends could defend, in a setting that was appropriate for families and children.

By the end of his life, he was admired and respected not only in the United States but also across much of the globe. When the Barnum & Bailey Circus, immodestly but accurately called The Greatest Show on Earth, traveled through the American heartland in the 1880s, Barnum would often go out to meet the show and thereby boost its attendance numbers. Rural circus-goers took special trains put on to carry them to the cities where the traveling extravaganza typically stopped. The reason for these excursions, on what were known as “Barnum days,” was often to see the showman as much as the show. He had become as close to a global celebrity as a person could be at the time. After Ulysses S. Grant’s second term as president, the great general made a two-year tour of the world, promoting the United States. Upon his return, Barnum said to him, “General, I think you are the best known American living,” to which Grant replied, “By no means. You beat me sky-high, for wherever I went . . . the constant inquiry was, ‘Do you know Barnum?’”

Robert Wilson was founding literary editor of Civilization, editor of Preservation, and since 2004, has edited The American Scholar. All three won National Magazine Awards during his tenure. He has been a book critic for USA Today and an editor at The Washington Post. He is also the author of biographies of Mathew Brady and Clarence King.

This giveaway is being brought to you by Simon & Schuster. They have made 20 copies available.