The Many Lives of Michael Bloomberg: Innovation, Money, and Politics

Michael Bloomberg’s life sounds like an exaggerated version of The American Story, except his adventures are real. 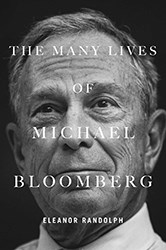 With unprecedented access, Eleanor Randolph, the veteran New York Times reporter and editorial writer who covered New York City and state politics, offers a revealing portrait of one of the wealthiest—and most private—public figures in the country. The Many Lives of Michael Bloomberg examines the variety of shoes Bloomberg has filled—business genius, inventor, politician, philanthropist, activist—from his reshaping of Wall Street with the 1982 introduction of his Bloomberg Terminals, to his 2002-2013 tenure as mayor of New York City, to his numerous philanthropic endeavors, which have recently included environmental efforts and battling the opioid epidemic. Publishers Weekly writes, “In Randolph’s coverage of his post-mayoral philanthropy, Bloomberg is depicted as a kind of anti-Trump , a domineering tycoon who is stable, centrist, and environmentally conscious … A vivid, timely study of Bloomberg’s brand of plutocracy.”

Eleanor Randolph is a veteran journalist who has covered national politics and the media for The Washington Post, the Los Angeles Times, and other newspapers. Her articles have appeared in Vogue, Esquire, the New Republic, and other magazines. A member of the New York Times editorial staff from 1998 to 2018, she focused on city and state politics, media, and Russia. She lives in Manhattan with her husband.

This giveaway is being brought to you by Simon & Schuster. 20 copies are available.

This giveaway is no longer active.