Alison Levine has climbed the highest mountains on every continent and skied to both poles of the planet. She knows what it's like to persevere "On the Edge."

"What happens when a leader is injured or for some reason is unable to continue to lead? Does the whole team just throw up their arms and say, 'Okay, now we're really screwed?'"
~Alison Levine

The simple answer is, you certainly hope not. And Alison Levine can help you become the kind of leader that builds teams that carry on.

Alison Levine is an adventurer, explorer and mountaineer. She has climbed the highest peak on every continent, served as the team captain of the first American Women's Everest Expedition, and skied across the Arctic Circle to the geographic North Pole. In January 2008 she made history as the first American to complete a 600-mile traverse from west Antarctica to the South Pole following the route of legendary explorer Reinhold Messner. Levine completed this arduous journey on skis while hauling 150 pounds of her gear and supplies in a sled harnessed to her waist. In May 2010 she completed the Adventure Grand Slam– climbing the 7 Summits (highest peak on each continent) and skiing to both Poles, an accomplishment fewer than 30 people in the world can claim. Her success in extreme environments is noteworthy given she has had 3 heart surgeries and suffers from a neurological disease that causes the arteries that feed her fingers and toes to collapse in cold weather, leaving her at extreme risk for frostbite.

Levine spent three years as an adjunct professor at the United States Military Academy at West Point in the Department of Behavioral Sciences & Leadership. Having spent months at a time in some of the world's most dangerous and extreme environments, Levine focuses on the topics of creating cohesive teams, taking responsible risks and developing no-nonsense leaders that can succeed in times of uncertainty. She serves on the advisory board of the CoachK/Duke University Center on Leadership & Ethics and is a strategic advisor for the Thayer Leader Development Group at West Point.

"Designated leaders need to cultivate leadership skills in each team member by giving others the confidence, the tools, the freedom, and the accountability that empowers each person to take on more responsibility and make critical decisions when the path ahead may not be clear-cut—especially if the designated leader is no longer able to do the job."

To start the series, we revisit Sally's "Jack Covert Selects" review from January...

Our take on Alison Levine's On the Edge: The Art of High-Impact Leadership

Alison Levine's requirements for accepting team members to join her on an expedition up Mount Everest are notably different from those of us who hire employees to join us on our business adventures. In addition to skill and enthusiasm, she explains, "there was the question, Would I trust this person with my life? If the answer was yes, then I had to ask myself, Is this someone with whom I would want to spend two months in a tent?"

But, indicative of how Levine succeeds in relating her high-wire experiences with the less life-and-death nature of business throughout the book, her overall point is about the leaps of faith we all make when putting together a trusted team. And a team, she says, only works when everyone on the team is a leader.

On the Edge is an engaging page-turner that uses Levine's experiences as a mountaineer (as well as Wall Street veteran and professor) to explore, and advise on, the challenges we each face as we strive to become better leaders. I found myself utterly charmed and productively consumed, as Levine's high-risk experiences give plenty of weight to advice such as: "Rigidity is just as dangerous as complacency" and "Treat every opportunity as if it is your one chance to ... leave people with an accurate impression of who you are." If Levine can implement these standards while sucking on oxygen and hanging off the side of a mountain, we surely can do it while sipping our coffee and sitting at our desks.

The chapter "Go Back, Jack, Do It Again" explains how climbers tackling Everest make a minimum of three shorter but no less dangerous trips up and down, in order to get acclimatized to the high altitude, before even trying to climb to the summit. Levine counsels us:

A great fallacy regarding progress is that it is defined by constant forward motion in the same direction. We assume that any steps in the opposite direction take us farther from our goal.

But taking the longer or the more circuitous route will still get us to our destination, and in fact, Levine suggests, "The mental trick is to understand that going down does not mean you're losing ground, but rather strengthening the foundation of your effort."

Alison Levine will help you realize that extraordinary challenges are extraordinary for a reason, and often feature aspects beyond your control, or that are particularly risky, so each time you try to scale them, you learn something more that you needed to know to proceed. Being the best leader you can be is about continually accumulating knowledge and adjusting, not ever assuming you know everything, and realizing a team is only as strong as every one of the members. On the Edge is a great reminder of that, and also, a good time spent with a woman whom you'd like to have as a good friend.

"A great fallacy regarding progress is that it is defined by constant forward motion in the same direction. We assume that any steps in the opposite direction take us farther from our goal."

Check in with us tomorrow as we continue our Thinker in Residence series with thoughts from Alison Levine on some of the major themes in On the Edge. 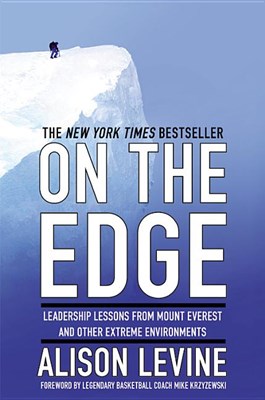 On the Edge: Leadership Lessons from Mount Everest and Other Extreme Environments