There are no secrets. When we ask writers about their process or scientists about their methods or inventors where they got their ideas from...

Kevin Ashton began his career at Procter & Gamble, where he led pioneering work on RFID (radio-frequency identification), for which he coined the term the "Internet of Things." He went on to cofound the Auto-ID Center at MIT and led three successful start-ups in the field. His writing about innovation and technology has appeared in The New York Times, the Atlantic, Quartz, and Medium.

Our Take on Kevin Ashton's How to Fly a Horse: The Secret History of Creation, Invention, and Discovery

In order to change minds and affect change, it's often important to first disprove commonly held beliefs, and to do so with fierce conviction. In How to Fly a Horse, "fierce" might be an understatement; Kevin Ashton refreshingly does not know how to beat around the bush.

There are no secrets. When we ask writers about their process or scientists about their methods or inventors where they got their ideas from, we are hoping for something that doesn't exist: a trick, recipe, or ritual to summon the magic—an alternative to work. There isn't one. To create is to work. It is not easy. It is work.

It may sound like Ashton is a wet blanket draped over creative hope, but the opposite is true. He proves over-and-over again that creative thought is ordinary thought, anyone can do it. Steve Jobs, the Wright Brothers, Einstein, none of them possessed some higher-level of creative thinking, they simply thought more and harder. They never stopped gathering information. They never stopped asking questions, even once they found answers.

Creating is taking steps, not making leaps: find a problem, solve it, and repeat. Most steps wins. The best artists, scientists, engineers, inventors, entrepreneurs, and other creators are the ones who keep taking steps by finding new problems, new solutions, and then new problems again. The root of innovation is exactly the same as it was when our species was born: looking at something and thinking, I can make this better."

The secret history to creation is that there is no secret history to creation. Stop asking questions, stop working, and creation ceases. This was beautifully illustrated by Ashton sharing the story of a phone company of which he was a board member. The company thought the answer to smarter phones was more buttons because that's what the company always did, only to see Apple and Steve Jobs continue asking questions and continue getting better answers. Rinse, repeat. Apple is still asking how to make it better. The other company? They're probably asking how to make a phone more like Apple's.

How to Fly a Horse is the kind of book I love. Last year's Steven Johnson (How We Got to Now) and Walter Isaacson (The Innovators) titles fall into a similar category as Horse: books that dig into innovation and creativity from a historical perspective, detailing key people and objects that created meaningful change. Both Johnson and Isaacson are also gifted writers. As I mentioned when reviewing How We Got to Now back in September, "I'd read a Steven Johnson book about brussels sprouts." But Kevin Ashton does something not a lot of business writers are willing to do when writing about innovation's history, or any topic for that matter: write with a brutal, uncomfortable honesty that takes the reader on a sometimes dark, The Wire-like journey, and he does so with a colorful and striking prose more akin to literary fiction than your average business read. This darkness is most prominent when Ashton discusses pitfalls of being the creator, the inventor, or the discoverer.

At the end of February 1940, Karl Duncker wrote something else.

Your have been good to me.
Don't condemn me.

He drove to nearby Fullerton and, while sitting in his car, shot himself in the head with a pistol. He was thirty-seven.

I'll let you discover the context of that passage. I point to it here simply to demonstrate that creation's history isn't all glory and celebration—it's often full of tragedy and disappointment—and to show that Ashton's narrative style makes his points thrilling to discover.

The other drawbacks to hard work, asking the right questions, and instigating important change are, 1) humans systematically oppose change, and as a result, have revealed some of our most despicable human characteristics while vociferously opposing change, and 2) those who create often don't get credit for their ideas due to their station in life.

Regarding the former, Ashton relays numerous stories of intense backlash to new ideas with varying results for the creator. Some creators are driven to depression, while others push through the negativity due to a unique, almost faith-based belief in their idea (of which I will ask Kevin about tomorrow in day two as our Thinker in Residence). As for the latter, Horse is littered with tales of female inventors never being given credit for their ideas because, well, they were women. This was most glaring in Rosalind Franklin's story. Franklin was, "the first-ever member of the human race—or any other species on earth—to see the secret of life." Rosalind Franklin discovered DNA, but it was three men who were awarded a Nobel Prize for Franklin's work. Unfortunately, Franklin's story was the norm, not an exception, when it came to women receiving credit for their hard work and creation.

So yes, Kevin Ashton is willing to paint the ugly portrait of creation's history alongside the more inspirational tales. But back to the beginning, it's all in the name of helping us prepare for what we need to know if we're planning to be creators and innovators. And by us, I'm talking about both individuals working on individual ideas, and organizations working toward organizational goals.

I haven't had a more difficult time reviewing a book in a while. Why? Because I really loved this book and I want to write about every subchapter of every chapter. I want to quote powerfully-written sentences like, "Creation is human. It is all of us. It is everybody," and brutally honest passages like this one that explains one of our excuses for passing the creative buck, "But time is the great equalizer, the same for all: twenty-four hours every day, seven days every week, every life a length unknown, for richest and poorest and all between. We mean we have no spare time, a blunt blade in a world whose bestselling literary series was begun by a single mother writing in Edinburgh's cafes when her infant daughter slept..."

In one sense, this review lost the forest for the trees, focusing too much on magnificent sentence structure and the darkness of creative history. Maybe I didn't work hard enough and ask the right questions. My Google Docs document history probably disproves the former. The latter is up for debate. But as you leave this review, indulge me in one last moment lost in the forest:

Creating accretes and compounds, and as a consequence, every day, each human life is made possible by the sum of all previous human creations. Every object in our life, however old or new, however apparently humble or simple, holds the stories, thoughts, and courage of thousands of people, some living, most dead--the accumulated new of fifty thousand years. Our tools and art are our humanity, our inheritance, and the everlasting legacy of our ancestors. The things we make are the speech of our species: stories of triumph, courage, and creation, of optimism, adaptation, and hope; tales not of one person here and there but of one people everywhere; written in a common language, not African, American, Asian, or European but human.

Read our interview with Kevin about some major, and some not so major, points in How to Fly a Horse. 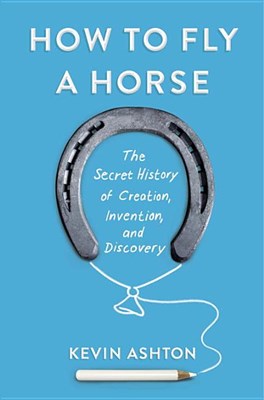