We begin our Thinker in Residence with Margaret Heffernan with the TED Talk that began the trajectory to her new book, Beyond Measure.

We have to seek out people with different backgrounds, different disciplines, different ways of thinking, and different experience, and find ways to engage with them. That requires a lot of patience and a lot of energy, and the more I've thought about this the more I think, really, that that's a kind of love, because you simply won't commit that kind of energy and time if you don't really care.
—Margaret Heffernan

Margaret Heffernan is an entrepreneur, Chief Executive, and author of the new TED book, Beyond Measure. She was born in Texas, raised in Holland, and educated at Cambridge University.

She worked in BBC Radio for five years where she wrote, directed, produced and commissioned dozens of documentaries and dramas. She was one of the producers of Out of the Doll's House, the prize-winning documentary series about the history of women in the twentieth century. She designed and executive produced a thirteen part series on The French Revolution for the BBC and A&E. The series featured, among others, Alan Rickman, Alfred Molina, Janet Suzman, Simon Callow and Jim Broadbent and introduced both historian Simon Schama and playwright Peter Barnes to British television. She also produced music videos with Virgin Records and the London Chamber Orchestra to raise attention and funds for Unicef's Lebanese fund. Leaving the BBC, she ran the trade association IPPA, which represented the interests of independent film and television producers and was once described by the Financial Times as "the most formidable lobbying organization in England."


In 1994, she returned to the United States where she worked on public affair campaigns in Massachusetts and with software companies trying to break into multimedia. She developed interactive multimedia products with Peter Lynch, Tom Peters, Standard & Poors, and The Learning Company. She then joined CMGI where she ran, bought and sold leading Internet businesses, serving as Chief Executive Officer for InfoMation Corporation, ZineZone Corporation, and iCAST Corporation. She was named one of the Internet's Top 100 by Silicon Alley Reporter in 1999, one of the Top 25 by Streaming Media magazine, and one of the Top 100 Media Executives by The Hollywood Reporter. Her "Tear Down the Wall" campaign against AOL won the 2001 Silver SABRE award for public relations.

Her third book, Willful Blindness (Simon&Schuster in the UK, Bloomsbury in the US, Doubleday in Canada) was a finalist for the Financial Times/Goldman Sachs Best Business Book award. In 2014, the Financial Times selected it as one of its "best business books of the decade." Her most recent book A Bigger Prize (Simon&Schuster in the UK, Public Affairs in the US and Doubleday in Canada) was published in 2014 and shortlisted for the Transmission Prize. She is a Trustee of the London Library and sits on the Council of the Royal Academy of Dramatic Art as well as one the boards of several private companies. Margaret blogs for the Huffington Post in the US and the UK and for Inc.com.

She was featured on television in The Secret Millionaire and on BBC Radio 4 in Changing the Rules, which won the 2008 Prowess Media Award. She has had four plays broadcast by the BBC and in 2011 has been awarded an honorary doctorate from the University of Bath. She mentors senior executives and contributes to corporate conferences around the world. She is married with two children.

We begin our Thinker in Residence series with her today with the TED Talk that inspired her new book, Beyond Measure: The Big Impact of Small Changes, with her TED talk that explores one of the "small changes" we can make at work to build more robust work cultures—embracing and encouraging disagreement.

Read more about Beyond Measure in our New Releases section, and come back tomorrow for the first part of our interview with her. 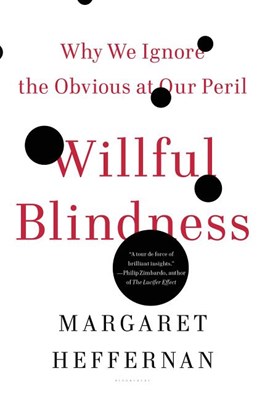 Willful Blindness: Why We Ignore the Obvious at Our Peril