We invite our reading community to come along as we take a deeper look at Bittersweet and learn more about author Susan Cain through this live-streamed interview.

The author of the bestselling phenomenon Quiet reveals the power of a bittersweet outlook on life, and why we’ve been so blind to its value.

This interview with Susan Cain was conducted by our Managing Director Sally Haldorson on April 20th. Here is the full video of that interview.

Purchase a copy of Bittersweet: How Sorrow and Longing Make US whoLE from our event partners, Boswell Book Company.

SUSAN CAIN is the #1 bestselling author of Bittersweet: How Sorrow and Longing Make Us Whole and Quiet: The Power of Introverts in a World That Can’t Stop Talking, which has been translated into 40 languages, spent eight years on The New York Times best seller list, and was named the #1 best book of the year by Fast Company magazine, which also named Cain one of its Most Creative People in Business.

LinkedIn named her the Top 6th Influencer in the World, just behind Richard Branson and Melinda French Gates. Susan partners with Malcolm Gladwell, Adam Grant and Dan Pink to curate the Next Big Idea Book Club. They donate all their proceeds to children’s literacy programs.

Her writing has appeared in The New York Times, The Atlantic, The Economist, The Wall Street Journal, and many other publications. Her TED talks on the power of introverts and the hidden power of sad songs and rainy days have been viewed over 40 million times.

Cain has also spoken at Google, PIXAR, the U.S. Treasury, P&G, Harvard, and West Point. She received Harvard Law School’s Celebration Award for Thought Leadership, the Toastmasters International Golden Gavel Award for Communication and Leadership, and was named one of the world’s top 50 Leadership and Management Experts by Inc. Magazine. She is an honors graduate of Princeton and Harvard Law School. She lives in the Hudson River Valley with her husband, two sons and golden doodle, Sophie. Visit Susan at susancain.net.

Emily Porter is our Community & Publicity Manager who loves conversing with the wonderful authors we work with. A film photographer and long-time film industry nomad, she has had a constant love for books throughout her life. When not at work she enjoys curling up with her cats, adding to her bookshelves, practicing yoga, and photographing new landscapes. Travel. Cats. Coffee. Tea. Film. Books. RadioLab. National Geographic. Patti Smith. Dinosaurs.
View more 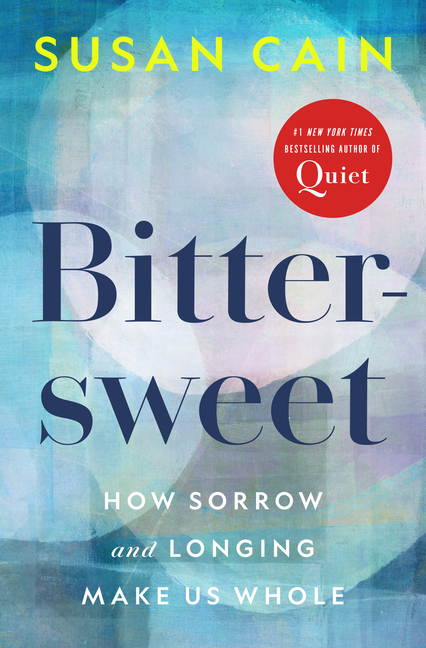 Bittersweet: How Sorrow and Longing Make Us Whole