One of my favorite books of 2011 was Once Upon a Car by Bill Vlasic. In it we met the whole cast of characters involved in the auto industry crisis and subsequent government bailouts of Detroit. One of the standouts in Vlasic's book was Ford CEO Alan Mulally, who turned that company around and whose leadership style I've wanted to read more about ever since. Luckily, our friends at Crown Business have published this excellent history of the Ford side of the crisis with Alan Mulally at the helm, and I can't recommend it highly enough.

Previously CEO of Boeing, Mulally arrived at Ford in 2006 into a culture that was more than a little resistant to change, a brand that had lost all its cache, and a company on the brink of financial disaster. His first task was realigning the corporate culture, and he immediately replaced the full week of corporate meetings usually held each month with a weekly meeting of all the executives to review the progress of various projects. "There are too many meetings," he told them. "When do you have time to think about the customer?"

Mulally encouraged total candor in his new weekly meetings. Still, when a quality issue was discovered on a major new product line and the executive responsible admitted that the launch was going to have to be delayed, the room went quiet awaiting Mulally's reaction.

Suddenly, someone started clapping. It was Mulally ... he beamed. "Who can help Mark with this?"

The people in the room pulled together and the product shipped without a flaw. More importantly, this incident encouraged others to put their fears aside and admit their own problems, which in turn helped Mulally see the extent of the trouble the entire company was in and begin to address it.

Mulally's approach to strategy was just as direct and distinct. Ford had made grievous errors in strategy in the past, well illustrated by the story of the Ford Taurus:

It introduced an upgraded version of the Taurus in 1992 that ... became the bestselling car in America, ... But Ford's investment in the popular sedan soon petered out. In 1997, Toyota's Camry claimed its crown, and the Taurus was soon relegated to rental car fleets. When production finally stopped in 2006, few even noticed.

By 2009, just three years after he took over the helm of the company, Mulally—against all advice, expectations, and odds—had resurrected the Taurus.

I was reading the Isaacson bio of Steve Jobs at the same time as reading an advanced copy of this book, and found myself preferring this one. Everybody loved the Jobs book, but his interpersonal style left me a bit cold. Genius sure, but I don't know that I would have liked working with him. Alan Mulally is a person I would love to work for, and this book will help you become that kind of leader while telling a riveting American success story at the same time. 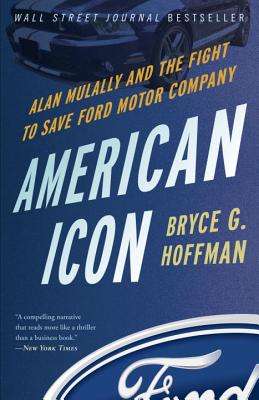