Before Happiness: The 5 Hidden Keys to Achieving Success, Spreading Happiness, and Sustaining Positive Change by Shawn Achor, Crown Business, 252 pages, $26. 00, Hardcover, September 2013, ISBN 9780770436735 We all want success, and assume that more success equals more happiness. Shawn Achor proposed in his previous book, The Happiness Advantage, that happiness is actually a precursor to success in the workplace—and his extensive research seemed to prove it.

We all want success, and assume that more success equals more happiness. Shawn Achor proposed in his previous book, The Happiness Advantage, that happiness is actually a precursor to success in the workplace—and his extensive research seemed to prove it. And that research, along with the extensive traveling, speaking, and learning he has done in 51 countries all over the world since, has led him to a deeper question. Happiness may lead to success, but what leads us to happiness?

And so his new book is about what comes before both success and happiness. Aptly titled Before Happiness, the book’s provocative thesis is that in order to be happy, we need to believe we can be happy. And he discovered in his travels that people’s ability to believe that doesn’t stem from their circumstance, but “the lens through which they viewed the world.”

The reason some people were thriving while others—people in the exact same situation—were stuck in hopelessness was that they were literally living in different realities.

The good news is that despite any assumption we might have that some people are simply born more optimistic than others, you can change your lens on the world and, therefore, the reality you live in. “The consistent ability to create this kind of reality,” Achor write, “is called positive genius, and it turns out to be the greatest precursor of success, performance, and even happiness.” Achor provides practical steps based on his research to boost our levels of positive genius and, in turn, our rates of success.

While there can be nothing more aggravating than being told to “turn that frown upside down,” that’s not Achor’s agenda here. Instead he is teaching us how to be in control of our success and improve our lives by preparing fertile ground for the arrival of happiness. Achor concludes the book by introducing us to the skill of Positive Inception, or spreading a positive outlook to everyone else in our lives.

The benefits of positive inception are twofold. Not only will we reap the obvious benefits of having other positive geniuses in our companies, on our teams, and in our families, but new positive psychology research … proves it is easier to sustain our own positive reality and build on our own successes when we help others to raise their levels of positive genius as well.

The author’s engaging stories and writing style will have you enthralled as he continues to peel away the layers of success and exposes not only what’s important and profitable in business, but fundamental human truths as well. 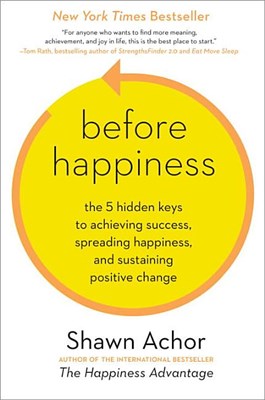