The American auto industry has had some stellar books written about it. Some of my favorites are John A. Byrne's classic, The Whiz Kids, which tells the story of the invasion of statistical experts into the auto culture after World War II and how that attention to financial constraints changed the product for the worse, and of course the great Alfred Sloan's My Years with General Motors, less a biography than an essential reflection on management. Now there is Car Guys vs. Bean Counters.

The material deals with the same problem as The Whiz Kids, but this book is a true insider's look at the auto industry. A nearly 50-year veteran of the industry, Bob Lutz has worked for each of The Big Three, though the book deals mostly with his time at General Motors where he returned to work in 2001 to face the challenge of reviving a dying brand.

Why was the brand dying? Because the company had been handed over to the financial guys while the true lovers of cars were pushed to the sidelines. The bottom line became more important than the product. Lutz doesn't have much nice to say about GM in the early 90s. It seems all the stories we have heard about GM's bloat are true. Here Lutz relates an eye-opening response from a supplier when he asked about his preferred companies:

[O]ne day, a supplier of bearings surprised me by answering, "My favorite customer is GM!" Whoa! "Why on earth is that?" I inquired. The supplier replied "Because they are so monumentally screwed up that we can sell them the identical bearing in seven different boxes, with seven different part numbers, and seven wildly different prices. Their purchasing groups are only dimly aware of one another's existence. It's a bit hard to keep it all straight, but boy, it is sure lucrative!

As you can see by this quote, and the fact he actually shares it with readers, Bob Lutz is a real maverick. His main message in Car Guys is that passion should always drive while analysis rides shotgun; a message with accompanying lessons applicable to any industry. Reading this book, like his previous book Guts (which focused on his time at Chrysler), is like having a couple beers with this crusty old guy who has done things we haven't ever dreamed possible—and he's a fantastic storyteller to boot. Enjoy and learn. 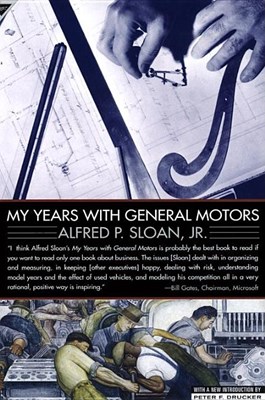 My Years with General Motors