"Execution: The Discipline of Getting Things Done" by Larry Bossidy and Ram Charan, CrownBusiness, 260 Pages, $27. 50 Hardcover, July 2002, ISBN 9780609610572 Note: This review was first published in 2002. In a recent conversation with an editor at a major publishing house, I shared my belief that Execution is still one of the best books on strategy and execution.

Note: This review was first published in 2002. In a recent conversation with an editor at a major publishing house, I shared my belief that Execution is still one of the best books on strategy and execution. Five years after it was published, Execution stands its ground, and I suspect will become a classic. Here is that original review.

I have been asked to write a column listing the fall's top three business books to appear in Midwest Express Airline's magazine. You lucky souls who have flown Midwest know what a great airline it is and I am very proud to have been asked to write this column. Execution is my first recommendation. I know it is a June title (obviously not even close to a fall release)...but tough. After Execution is recognized as one of the best books of the summer, it will still be one of the best books of the fall. My bat, my ball, my game.

Why will this book have such impact and longevity? Because its team includes a superb writer-consultant, a real legend of a CEO, and a critical, though oft- ignored subject. Ram Charan, the writer, has previously worked with Noel Tichy to write a classic book on leadership, and also wrote a little gem called What the CEO Wants You to Know. Here, he works with one of the top five CEOs of all time, Larry Bossidy-Honeywell chairman-to discuss execution, which translates into how to bring strategy from theory to reality. Bossidy was with GE forever, then went to AlliedSignal in the early nineties, transforming that company, and was named "CEO of the Year" by Chief Executive magazine in 1998. In this book,the authors discuss each of the three main parts, Why Execution is Needed, The Building Blocks of Execution, and The Three Core Processes of Execution, and then they offer personal insights and stories about the issue. I, at first, found the style somewhat off-putting, but warmed up to it quickly. The voices of these two men really stand out because of the unique structure of the book.

Despite the excellent resume of its authors, it is the subject matter that intrigues me most. It appears to be such an unromantic subject, execution, in the face of such dashing themes as strategic planning, globalization, total quality management, or e-anything. These are the bad boys of business books, the real lookers, but execution? Isn't that like telling folks to dot their "i's" and cross their "t's"? Isn't execution the ugly duckling paddling next to the regal swan, the youngest sister with no dowry? And yet, what could be more basic, more crucial to the success of any strategic or globalization plan or to any form of management or new idea for the web? Execution -- ignore it and this book at your own risk.

In my experience in the business world, I find the ability to actually finish a project a lost art. The authors agree and firmly place the blame of a company's failure to execute strategic plans on senior managers who delegate too much. They supply "building blocks" to help make execution a part of a company's core culture and avoiding "hitting the wall" when it comes to strategy. One example: a leader's most important job is the hiring and appraising of the right people. Sound like something for HR to handle? Well, Bossidy doesn't think so, and he personally makes the reference calls for key hires. The authors shore up their argument for greater focus on execution using examples from Lucent, GE, AT&T and others, to show what companies have done right and wrong in terms of executing in the past. They are not afraid to name names, and this gives a real urgency to the subject. 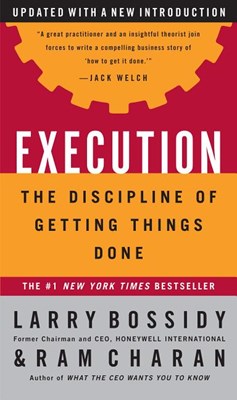 Execution: The Discipline of Getting Things Done