When I read the essay we received from Henry R. Nothhaft for ChangeThis—a site we run that's dedicated to manifestos— his viewpoint grabbed my interest and left me wanting more. Originally, I had overlooked his book Great Again in the mass of books that come through our doors everyday, but thanks to his manifesto, I gave it the time it deserved and came away a lot more informed about a critical and timely issue in this country—job creation.

A highly successful serial entrepreneur and the son of a steelworker from Sharon, Pennsylvania, Nothhaft's mission is to help restore the middle class by giving "the leading role in the American economic drama to the start-up entrepreneur who creates wealth, not the Wall Street trader who merely manipulates it." His main thesis is that "new entrepreneurial start-ups—the sole creators of tomorrow's jobs and industries—are being ravaged by a perfect storm of dire business conditions and dumb government policies." He and his coauthor David Kline, a Pulitzer Prize-nominated journalist, developed five remedies—solutions that are surprisingly doable—to the situation.

For example, the authors call for a fix to the patent office so we can stimulate invention and entrepreneurship. They explain that current underfunding of the patent office means that it now takes "an average of 3.7 years" to get a ruling on a patent. And without that patent, a start-up can't get the investment it needs to start a company and create jobs. So this alone could be the lifeline entrepreneurs need to create the millions of jobs needed in our economy right now.

They also call for meaningful incentives to bring high-tech manufacturing back to America. Nothhaft challenges the currently popular notion that America can remain competitive on research and innovation alone, while outsourcing manufacturing. They document that, throughout history—whether it's in Detroit, Cleveland, or Silicon Valley—research and the innovation it spawns always follow where the manufacturing facilities are, and that remains true today as the outsourcing of manufacturing is beginning to move R&D offshore.

The offshoring of R&D has gotten so large, in fact, that the National Science Foundation (NSF) has for the first time started keeping track of it. The NSF reported that in 2008 $58 billion, or one-fifth, of total R&D spending by U.S. firms took place overseas. Depending on the industry, that amounted to anywhere from 19 percent to 39 percent of R&D spending.

Said economist Richard Florida about the report: "In key sectors of the economy, innovation appears to be following production off shore." Great Again is a clear-eyed, sober and well researched assessment of how we can bring innovation back into the economy, begin creating jobs and restore the middle class in this country. I'm glad I gave it the time it deserved, and hope that many others do, as well. 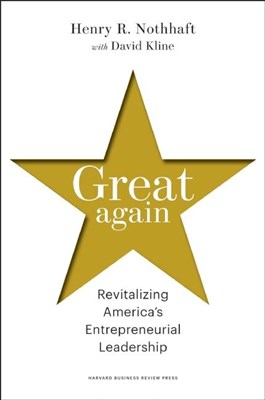