Hit the Ground Running: A Manual for New Leaders by Jason Jennings, Portfolio, 256 Pages, $25.95 Hardcover, March 2009, ISBN 9781591842477 Jason Jennings has been a favorite of mine for a long time. He writes the kind of books I like. They are research based, with interesting examples to support that research. I found his first book, It's Not the Big That Eats the Small... It's the Fast That Eats the Slow, especially fun to read because, like he does with this book, the people and companies represented are new and interesting--not the usual business-book fodder of Warren Buffett or Steve Jobs or FedEx. What Jennings and his researchers did for this book was study the Fortune 1000 companies, looking for new CEOs who created the most shareholder value in the first years of their time on the job. Jennings then interviewed the ten best performing CEOs. What Jennings' team found was that these CEOs, on average, doubled revenue, doubled profit margins and more than tripled earning per share during the past decade. Some of the companies represented are Smuckers, Staples, Humana and Goodrich. During the interviews, Jennings discovered that what these leaders have in common is their ability to quickly size up the situation when they arrived, stop the bleeding, assemble the right people and achieve remarkable results. Jennings also identified ten rules that new leaders need to apply in a new position. Rules like: Ask for Help; Gain Belief; Be Accountable and; Find, Keep and Grow the Right People. Each one of the ten rules is the basis of a chapter, and he has a corresponding company history to support every rule. Now, I understand that, chances are, you're not going to be a CEO. But, most likely, you are going to start a new job, or get transferred to a different position, sometime in your life. Just as Michael Watkins does in his classic, The First 90 Days, Jennings shows you how to best make that transition. Jason Jennings' books are always very narrative-driven. Jennings is, in the truest sense of the word, a storyteller. All his books start with solid research base to support a premise and Jennings uses stories and connective tissue to support the team's findings. It is a great way to learn. 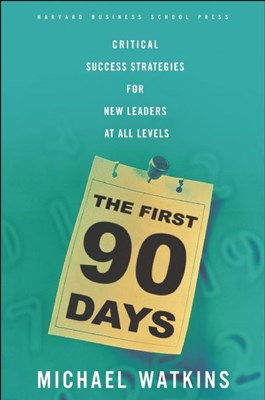 The First 90 Days: Critical Success Strategies for New Leaders at All Levels