Inside Apple: How America’s Most Admired—and Secretive—Company Really Works by Adam Lashinsky, Business Plus, 223 Pages, $26. 99, Hardcover, January 2012, ISBN 9781455512157 Apple, one of the most iconic companies of this century, has created many life-changing products (products we mostly didn’t know we needed until they made them, and now can’t live without), yet we know little about the inner workings of this organization… other than what Apple wants us to know. One thing I found particularly illuminating is Apple’s ability to say no.

Apple, one of the most iconic companies of this century, has created many life-changing products (products we mostly didn't know we needed until they made them, and now can't live without), yet we know little about the inner workings of this organization... other than what Apple wants us to know.

One thing I found particularly illuminating is Apple's ability to say no. This company, with over $108 billion in revenue, and 30 years of business, can fit their entire product line on an average-sized conference room table. Their marketing and communications team continually simplifies their corporate message. Found at the bottom of a 2011 Apple press releas:

Apple designs Macs, the best personal computers in the world, along with OS X, iLife, iWork and professional software. Apple leads the digital music revolution with its iPods and iTunes online store. Apple has reinvented the mobile phone with its revolutionary iPhone and App Store, and has recently introduced iPad 2 which is defining the future of mobile media and computing devices.

That is the entire company in three sentences. This is a lesson we all can learn, from limiting our product line to crafting our elevator pitch.

Inside Apple follows through on its promised internal view of this unique company and is particularly intriguing due to the loss of Steve Jobs, Tim Cook's new position at the helm, the criticisms of its current manufacturing system, and the dominance of i-everything instead of the Mac computer. What will Apple do next? Lashinsky makes it clear that even Apple doesn't know.

Apple is a company of paradoxes. Its people and institutional bearing are off-the-charts arrogant, yet at the same time they are genuinely fearful of what would happen if their big bets go bad. The creative side of the business ... is made up of lifers or near lifers who value only an Apple way of doing things—hardly the typical creative mind-set. The operations side of Apple runs like any company in America, but better, and is led by a cadre of ex-IBMers, the cultural antithesis of Apple. Apple has an entrepreneurial flair yet keeps its people in a tightly controlled box, following time-tested procedures. Its public image, at least seen through its advertising, is whimsical and fun, yet its internal demeanor is cheerless and nose-to-the-grindstone.

Adam Lashinsky is the senior editor at large for Fortune and as such is uniquely qualified "to hack into Apple's closed world and to decode its secret systems so that aspiring entrepreneurs, curious middle managers, envious rival CEOs, and creatives who dream of turning insights into inventions can understand the company's processes and customs." He is also a compelling storyteller whose prose moves quickly and is never dragged down by exclusivity or jargon. At a time when books about Apple are flooding the market, this is the one to read. 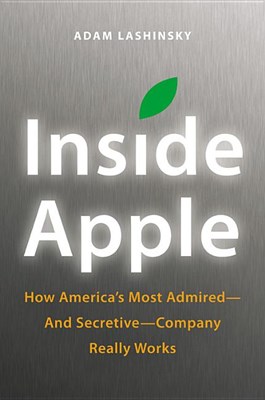