Unstoppable: Finding Hidden Assets to Renew the Core and Fuel Profitable Growth by Chris Zook, Harvard Business School Press, 208 pages, $29.95 Hardcover, May 2007, ISBN 9781422103661. You expect to find trilogies in fantasy or science fiction literature. What if I told you there was one in business books and it could capture your attention like an Indiana Jones expedition?

Chris Zook has been leading readers on a business strategy adventure since 2001. His first book, Profit from the Core, summarized ten years worth of Bain research showing that successful growth comes from focusing on the essence, or "core," of the existing business. In Beyond the Core, Zook argues for how companies can make adjacent strategic moves leveraging that core. His third book, Unstoppable, comes out this month and asserts that two-thirds of companies will have to redefine their cores in the next ten years and recommends how to make that transition successfully.

Zook starts his concluding volume with a description of the ever-increasing turbulence business faces today:

"[W]e found that 153 of the top 500 companies in 1994 did not even survive the following decade intact. They either ended up in bankruptcy or were acquired and integrated into a larger company. Of the 347 companies that survived and maintained independence, we judged that 130 had undergone a fundamental shift in their core business strategy and its key parameters. In other words, nearly six out of ten companies faced threats to their survival or independence, and only about half were able to meet those threats by redefining their strategies."

Zook has always stressed looking at the industry profit pool rather than the market size. He suggests it is changes in the profit pool that signal the need for redefining a company's core. Your company could be losing your share of the pool (US vs. Japanese automakers) but the market has not changed; the profit pool could have shifted to a different point in the value chain (Intel and Microsoft in PCs); new technology could completely change the economics of an industry (Amazon in books).

The core is where companies must find strength to withstand industry turbulence, Zook argues. But he also suggests that all companies have hidden assets that can be utilized when a company must redefine its core. Like any good consultant, Zook has classified them into three broad categories. The first is undervalued business platforms ranging from adjacencies into new geographies to support services to non-core businesses. The second is untapped customer insights, a familiar idea often hard to act on. Underutilized capabilities are the most abstract of the three and was the least often used in the companies Zook examined.

A discussion about the challenges leaders face given the options and uncertainties in the business world ends Zook's trilogy. He recommends focusing on the external, and what is going on in business in general, but ends with this: "[M]y overwhelming feeling from seven years of studying success and failure among companies searching for profitable growth is that, ironically, many of the most challenging demons are internal and our most difficult foes are often ourselves."

Go back and read this series from the start. If you haven't read any of Zook's work, buy all three. I always find myself energized by the possibilities after reading Zook's work and I think you will too. 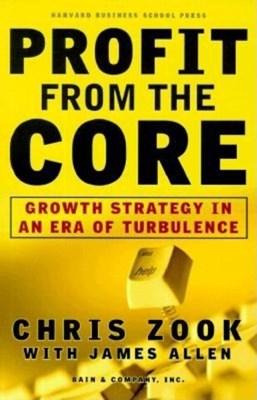 Profit from the Core: Growth Strategy in an Era of Turbulence 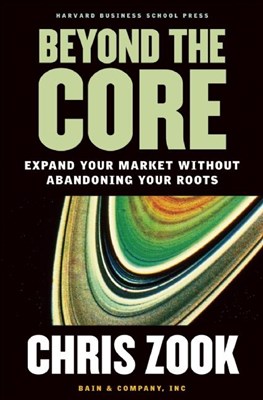 Beyond the Core: Expand Your Market Without Abandoning Your Roots