Winning the Story Wars: Why Those Who Tell—and Live—the Best Stories will Rule the Future by Jonah Sachs; Harvard Business Review Press, 264 pages, $27. 00, Hardcover, July 2012, ISBN 9781422143568 A popular pursuit for business and current affairs writers is to produce work that investigates and exposes all the various ways that marketing manipulates consumers. And there is certainly cause for concern. A popular pursuit for business and current affairs writers is to produce work that investigates and exposes all the various ways that marketing manipulates consumers. And there is certainly cause for concern. Is our maneuvering around the internet truly tracked, stored, and sold like we fear? Do stores like Target know what we're going to buy before we do as a result of intense data collection and hypotheses about what "people like us" buy? Are there wizards behind the curtain of every ad and every promotion who weave stories so magical and persuasive that we no longer act of our own free will?

On first glance, Jonah Sachs' Winning the Story Wars appears to be that very type of book. The title harkens back to Ronald Reagan's Strategic Defense Initiative—renamed "Star Wars" by cynics—that was intended to protect the US from nuclear missile attacks (though I think the author would prefer I reference the George Lucas film of the same name). The cover art and interior illustrations are apocalyptic. The Table of Contents portends doom with chapter titles like "The Five Deadly Sins," "The Myth Gap," and "Marketing's Dark Art." But Winning the Story Wars is actually a very optimistic book. Sachs, the co-creator of such viral videos as The Meatrix, The Grocery Store Wars, and the multi-armed Story of Stuff Project, believes that truthful stories are the stories that will ultimately win the story wars.

Sachs didn't set out to write a book about storytelling. He was interested in finding out the answer of a very common question that his storytelling success had garnered: How had he done it? Because he didn't know the answer—"Instinct!" seemed an inadequate response—he began to investigate and discovered:

So many of the stories that have really stuck, that have shaped culture, are about one thing: people reaching for their highest potential and struggling to create a better world. ... It turns out that a small group of storytellers have known or at least sensed this all along, building wildly successful brands, entertainment, and political messages that burst through the media din and become legendary by understanding the formula. They are practicing an art that has evolved into a quiet but powerful counterforce to the much-decried practice of influencing audiences through fear and insecurity that dominates our media marketplace. These storytellers are creating a practice of marketing that can be a powerful force for good. Without knowing it, I had become one of them. 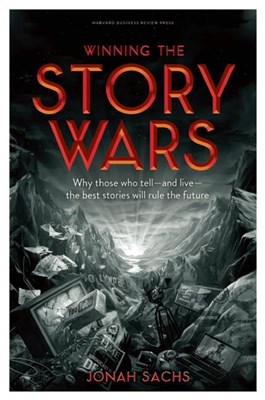 Winning the Story Wars: Why Those Who Tell-And Live-The Best Stories Will Rule the Future