New Excerpt - from The Open Brand

There's a new excerpt up on the Excerpts blog. It's from The Open Brand: When Push Comes to Pull in a Web-Made World by Kelly Mooney and Nita Rollins, Ph. D.

There's a new excerpt up on the Excerpts blog. It's from The Open Brand: When Push Comes to Pull in a Web-Made World by Kelly Mooney and Nita Rollins, Ph.D. The authors discuss marketing strategy in the new world of participatory media and consumer-generated content. The book isn't out until March, so be sure to bookmark this post if you're interested in getting a copy.

People Like Me In contrast to the pre-internet world, a "person like me" no longer has to live in the same neighborhood, belong to the same book club, have kids at the same school or work at the same firm. In fact, a "person like me" doesn't have to be anything like "me" -- at least, not demographically. That person just has to share a similar interest or experience, which I discover while surfing, searching or checking out my favorite social networking site. That "person like me" becomes an ally and advisor by virtue of having a seemingly independent, informed opinion about a subject that is relevant to me. Forrester Research reports that over 52 percent of adult consumers typing queries into search engines are doing so to make or influence routine purchase decisions. All consumers are 50 percent more likely to be influenced by word-of-mouth recommendations from their peers than by radio or TV ads, according to a Nielsen BuzzMetrics 2005 report. Why? Because trust is now in the network -- in groups of interconnected "people like me."

Here's a direct link to the post: http://800ceoread.com/excerpts/archives/007616.html Kelly Mooney is the author of The Ten Demandments, which was a Jack Covert Selects in June 2002. 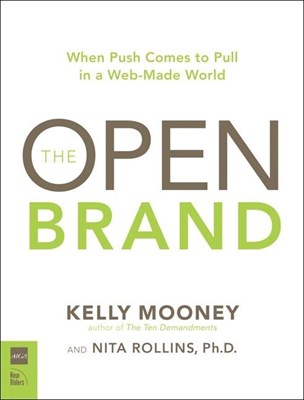 Open Brand: When Push Comes to Pull in a Web-Made World, the