The Silo Effect: The Peril of Expertise and the Promise of Breaking Down Barriers

In her new book, Gillian Tett teaches us how to master silos so that they won't master us.

As Gillian Tett tells it, her new book The Silo Effect “started during the Great Recession of 2008, but it is not a book about finance.” That’s partly because she’s already written that book; It’s called Fool’s Gold, and it’s brilliant. But it’s also because the Great Recession wasn’t entirely about finance. It was also about silos, and the division of an industry into so many parts and specialties that no one could see the forest for the trees, or the fact that a forest fire was about to break out—even though Tett herself had been warning the conditions were ripe for one.

The work that went into this book started well before the Great Recession, even if the unifying concept of silos didn’t emerge in Tett’s consciousness until the Great Recession. And that is because the book draws heavily not just on her training as a financial journalist, but also on Tett’s training in anthropology. She is, I’m sure, the only award-winning financial journalist to have done fieldwork in Tibet and research into the marriage practices of Tajikistan when it was a part of the Soviet Union—particularly as a tool for how “the Tajik had retained their Islamic identity in a (supposedly atheist) communist state.”

In fact, after an introduction that tells the tale of Mayor Bloomberg deciding to take on the silos of New York’s City Hall, and a great success story in Mike Flowers, a government prosecutor that had an unusual path through Manhattan, Washington, and postwar Iraq who decided to use some of the predictive techniques he saw in Iraq for avoiding roadside bombs to predict where house fires were most likely to break out in New York City, she devotes the entire opening chapter to explaining why “anthropology can be useful in terms of making sense of the modern world—and its silos.” And it is because silos are largely a cultural phenomenon. She draws on the work of anthropologist Pierre Bourdieu to provide an intellectual framework for the book, and though she tells readers uninterested in this part of the work that they can skip over the first chapter, I strongly suggest you don’t.

The threads come together as she turns an anthropological lens on organizational silos, which she begins by acknowledging the modern world actually needs, “if you interpret silos to mean specialist departments, teams, and places.”

The reason is obvious: we live in such a complex world that humans need to create some structure to handle this complexity. Moreover, as the flood of data grows, alongside the scale of our organizations and complexity of technology, the need for organization is growing apace. The simplest way to create a sense of order is to put ideas, people, and data into separate spatial, social, and mental boxes. Specialization and expertise usually deliver progress. As all, as Adam Smith, the eighteenth-century economist, observed, societies and economies flourish when there is division of labor.

That said, while a lack of division leads to inefficiency and eventually chaos, too much efficiency and division can lead us there, as well. And it did in the case of Sony, which did what so many companies have done in response to becoming large and unwieldy—reorganize into smaller units and tighter teams with distributed power and more autonomy. This was intended to reduce hierarchy and encourage a more entrepreneurial spirit, and it worked at first, but it eventually turned into a turf war that culminated in the Memory Stick Walkman… and Vaio MusicClip. Yes, the company whose biggest hit—the original Walkman—changed the way we listened to the biggest hits forever, was the first to bring the idea of a digital walkman to market in 1999. But working out of their silos, they lacked collaboration and a cohesive vision, and they brought two of them, out of two separate units of the company, to the market at the same time. And, not only were they competing with each other and confusing consumers, they were stifled by another silo, Sony Music Entertainment, which was terrified of the way digital music could undercut their revenues and refused to cooperate—even for a Sony device. And these were only two of an endless stream of products coming out of Sony silos at the time. So when Apple—a company that biographer Walter Isaacson describes Steve Jobs having pushed to “work as one cohesive and flexible company,” and which intentionally limited its product offerings—brought out the iPod two years later, the game was over, and Sony was in a downward spiral.

Tett proceeds to tell the story of Howard Stringer, who became CEO of Sony in 2005 and tilted at the silos there like a modern day Don Quixote until 2012, but found the culture was too entrenched, (a fact not helped by the fact that he didn’t know the primary language of the company, Japanese) and was unable to bust them. Silos still divide Sony, to the degree that an activist investor began a campaign in 2013 to split the entertainment and electronics business entirely, a move that led to a bigger breakup last year.

Ironically enough, one of the companies that seems to be getting it right so far—and we must stress the so far part since they’re but a decade old—is Facebook. I say it’s ironic because Facebook is known for putting the rest of us in silos, using algorithms to filter users’ feeds to show them only the things their online behavior suggests they’ll like or agree with. But it is something the workplace is specifically designed to avoid, and Tett shares their successes in doing so while warning us that mastering structural silos is always a work in progress, and never a finished project. Success can, in fact, lead to a "gigantic social silo" all its own, and Tett warns of a "techie ghetto" developing in Silicon Valley.

But my favorite story is that of Brett Goldstein. Running operations for tech startup OpenTable at the age of 26, he decided after the events of September 11th that he wanted to do something more meaningful with his life than help wealthy people book tables at restaurants more easily. So he set off on a quixotic quest of his own, to become a member of the Chicago Police Department. In a city where, if you're a police officer, there's a good chance your father and grandfather were also police officers, running a tech company wasn't exactly the typical path into the CPD. When he graduated valedictorian of his academy class, a distinction that came with the opportunity to choose which district he would patrol, he chose one of Chicago’s most violent and made a name for himself there. He moved up in the department, and was eventually recruited by police superintendent Jody Weis (a twenty-two year veteran of the FBI, he was an outsider himself—the first outsider to hold the role of superintendent in Chicago for fifty years) to combine his tech experience with his police work. Goldstein developed a “murder map” using data points on homicides and tracking gang movements to determine where a murder was most likely to take place, so they could increase police presence in areas that were ripe for violence and defuse a situation quickly if one arose. Launched at the beginning of 2010, the map seemed to work, as the murder rate declined until “in the summer of 2011, [it] tumbled to its lowest level since the 1960s.” Unfortunately, after he left the CDP later that year (partially due to being tired of political infighting that led to superintendent Weis's departure, and partly to accept a position at City Hall creating a city-wide interactive platform), the department wound the program down and reverted to more traditional methods. But as the Chicago Police were winding it down, and the murder rate in Chicago began to spike again, Goldstein and Weis began getting requests from other departments—like Los Angeles and Memphis—to explain their system to them, and the seed of his idea has now spread around the world.

The story of Brett Goldstein illustrated what may be the book’s most important lesson:

Before looking at institutions, it pays to think about individuals. After all, institutions are just gigantic collections of people and one of the most basic steps that we can make to fight the risks of silos starts not with a leadership committee or organizational chart, but inside our own heads.

And this is where we return to anthropology, for it is that discipline that teaches us to view, with a dispassionate lens, the mind frames and cultures we exist within and ask “why.” And we don’t need to go back to school or take night classes in anthropology to gain that mindset. Gillian Tett’s stories in The Silo Effect will help us see and examine our own silos, both mental and organizational, in a whole new light, and begin to master them so that they won’t master and divide us. 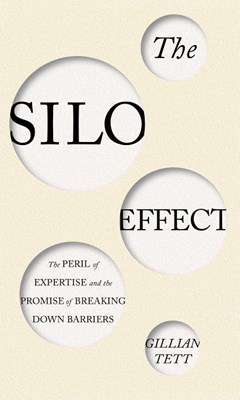 The Silo Effect: The Peril of Expertise and the Promise of Breaking Down Barriers