Broad Influence: How Women Are Changing the Way America Works

Jay Newton-Small presents an unprecedented examination into how women are changing the political, economic and social landscapes. “A cogent argument for gender parity and a revealing look at cultural change.”

“Jay Newton-Small has the seen the future—and it may actually work.
Fueled by detailed and intelligent reporting, she demonstrates that
the arrival of women into positions of power will really make a difference.
This is real cause for optimism.”

Two years ago, the women of the Senate came together to reopen the government when none of the men would talk to each other. It was then that the country saw for the first time the impact women can have when they reach what’s called “critical mass”—usually between 20 and 30 percent—of any body. Turns out that women in all three branches of the government are reaching this major tipping point. Exactly a century ago the first woman was elected to office, 32 years ago we got the first female Supreme Court Justice and 23 years ago women got their own bathroom off the Senate floor. Broad Influence: How Women Are Changing the Way America Works (Time Inc. Books, January 5, 2016; $27.95) by Jay Newton-Small looks at how the public sector is reaching critical mass and the work that remains in the private sector. But, ultimately, the question isn’t why this happened, but what happens next?

In Broad Influence, Newton-Small, one of the nation’s most respected and experienced Washington journalists, takes readers through the hallways of Capitol Hill, inside corporate boardrooms and police departments, onboard U.S. Navy ships and behind Hollywood’s cameras—wherever women are changing the way how America works.

Broad Influence is a powerful and insightful look at how women are transforming government, politics and the workforce and how they are using that shifting dynamic to effect change throughout America.

JAY NEWTON-SMALL is a political correspondent for TIME, covering Congress, politics and foreign policy. She has focused extensively on women's role in Washington, as evidenced by her two Sarah Palin cover stories, magazine profiles of Nancy Pelosi, Valerie Jarrett, Michelle Obama, and, of course, the October 2013 story that started it all, “Women Are the Only Adults Left in Washington,” about the 20 women senators who broke the logjam to get the government restarted and avoid default. She covered Hillary Clinton's 2008 campaign and her tenure at the State Department. She has interviewed almost every female member of Congress; and most living past and present female cabinet members and governors. 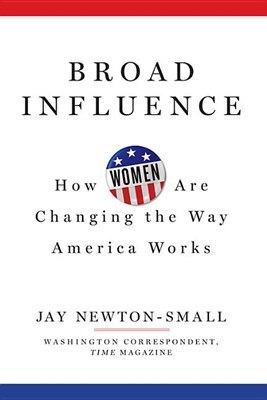 Broad Influence: How Women Are Changing the Way America Works