Excerpt from The Engine of America

The following is an excerpt from Chapter 4 of The Engine of America: The Secrets to Small Business Success from Entrepreneurs Who Have Made It! by Hector V. Barreto.

As I was on these construction sites, there were very, very large projects going on. I began to dream about building a project of my own. It was a pretty modest dream at the time and I began to think of it as a possibility. I decided I would start a small construction management company. My start was very nontraditional. Many times, you draw up a business plan and follow it. I never dreamed of owning a business. I started very, very small, working in the development. Of course, banks didn't like to fund construction companies. To make a long story short, I had this blue suit and I went to several banks, but I was rejected by all of them, six banks. My parents finally mortgaged their house for me to get going for $2,500. It was the bridge money needed to get me over the gap until I was able to get a small business loan. Perseverance and persistence have kept me going. They are important to the extent that I believe I will outwork most people in finding a solution. This led to starting a company as a curb cutter and doing sidewalks and foundation work -- it was really a foundation for building my business to what it is today.

The growth of both the companies started by these two woman has been nothing short of inspirational. Less than 10 years after it started, Mercedes Electric had achieved its goal of being one of the leaders in the distribution of electrical equipment in South Florida. By 1992, Mercedes Electric Supply, Inc. and moved into a 300,000-square-foot warehouse and office building, housing over $2 million worth of inventory. The company Mercedes now heads acts as an electrical, automation, and data communications distributor that employs 45 workers, has annual sales of over $25 million, and is growing rapidly. It ranks among the 200 largest electrical supply houses in the country. In the past couple of years, as Miami International Airport has undergone a significant expansion and rehabilitation, Mercedes Electric Supply, Inc. has won the largest it won the largest contracts in history. First, it won a $10.2 million contract from American Airlines to supply the electric distribution and lighting system for its new terminal. Then it won a $9.2 million subcontract from the general contractor doing the South Terminal modernization and now has started a $3 million contract on the North Terminal modernization. Linda Alvarado never lost her dream of building grand projects. Her small sidewalk and foundation company morphed into a small general construction firm and soon became one of the fastest growing commercial general contracting firms in the country. It was one of three firms that built the new Denver Broncos stadium and was also part of the construction of the Denver International Airport and the Colorado Convention Center. Today, it employs 450 workers and has revenues in the multimillions, building projects for public and private sectors, both domestically and internationally. Both Linda Alvarado and Mercedes LaPorta are successful not because they had some better idea for a new product or service. Both, after all, are in very settled, old line industries. Although both brought innovative techniques to what they do, so did their competitors. Nor are they successful simply because they worked hard. When talking about their years in the construction industry, their stories of what they overcame are so similar that you realize they succeeded because they stood up to decades of prejudice. They chose not just to ignore the conventional wisdom, but to meet it head -- on and steam roll right over it. Their stories of their early years are very alike. Mercedes remembers with a laugh:

It's hard enough for a woman to start a new small business, but it's doubly hard when that business is typically a "man's business." When I started 28 years ago, I don't remember running into a woman anywhere in this industry down here in South Florida. I had a lot of doors slammed in my face. In the early years, I had to use whatever tools might be available to me to break in. In those times, I was kind of relegated to the back room because I couldn't get my foot in the door anywhere. So my partner, who was a man, would have to go out to make all the calls.

Linda remembers that, at that time, women just weren't welcomed on construction sites:

I experienced graffiti being written on the walls and pictures of me in various stages of undress. Nevertheless, I worked with some really good people and I knew this was an industry that I really wanted to stay a part of. Being optimistic by nature gave me some sense of personal mission to show that women could succeed in this field. You have to smile because what people are looking for when I walk in the room is somebody six foot five and burley. And in reality, I'm five foot five. I would be asked, "Do you know what you're doing . . . Do you know you're not going to be welcome?" I was never directly told I couldn't do it, but it was indirect. I was once told, "You have so much potential, have you looked at other fields like teaching or corporate America or even law school?" At the time, women were just making their initial inroads in those fields. "Why don't you look at areas you could fit in?" I was told. I overheard conversations and jokes about me from many people. It was an environment where being the first led to guys putting an arm around me and saying, "What's a nice girl like you doing in a place like this?"

But instead of becoming discouraged, the hostility made both women dig in their heels and try that much harder. Mercedes says:

But, in all these 28 years, I've never considered there was anything I wouldn't be able to overcome, whatever problems I had at the time. I always knew I would find a way to do it, and I always did find a way to overcome the obstacles that were in my way. When a person told me I was going to fail, I just looked him or her straight in the eye and said it would never happen.

It was for me, at the same time, both hurtful and challenging. When your credibility is questioned, it's very easy to personalize the criticism, and I had to be very careful not to disqualify myself from opportunities, not to believe the conventional thinking, and not to put myself in a box. That was my biggest challenge. While no one ever told me I would fail, I'm sure there were some bets I would. My mother always told me you have to start small but think big. That was reinforcement to me and reminds me today that all businesses started as small businesses. Without some pain, there can never be gain. The key is balancing that and measuring that. That little sentence let me go back and rethink and, if nothing else, say, "Look. I'm no different than anyone else in a pickup with a briefcase."

Both have now gone on to be so much more than just business successes. Mercedes LaPorta is active in numerous civic and business groups including the Women's Business Enterprise National Council (WBENC) Women President's Organization, the National Minority Supplier Development Corporation, National Electrical Contractors Association, and the National Association of Women in Construction. She is a passionate advocate for women in business, serves on the Enterprising Woman National Advisory Board, and is a WBENC ambassador who works to get large corporations to recognize the importance of supporting the growth of women-owned businesses. She has become a mentor especially to women starting out who own their own businesses. In the mid-1980s, Linda Alvarado started a company called Palo Alto Inc., with her husband Robert. Palo Alto built and now runs more than 100 fast-food restaurants, including Taco Bell, Pizza Hut, and Kentucky Fried Chicken locations. In the early 1990s, she heard that the Colorado Rockies baseball franchise was up for sale. "I had never considered owning a professional sports team," Alvarado says. But the more she thought about it, the more she liked the idea. No woman had ever tried to buy a Major League Baseball franchise. "It was a huge risk for a woman, especially a Hispanic woman, to own a sports team." But at age 39, she became part owner of the Colorado Rockies. She now is a corporate director for three Fortune 150 companies and has served as the chairman of the board of the Denver Hispanic Chamber of Commerce and as a commissioner of the White House Initiative for Hispanic Excellence in Education. But every day both of them still worry about their businesses. Mercedes confides:

Right now, my business is getting ready to make another significant step in size and volume. So I'm preparing myself for this next step forward by adding technology tools. We have had computer systems and technology for a long time, but as we grow we will need more and more to service our growing customer base. In my warehouse, I'm now using automated handheld devices that will print out orders and inventory. Everything is done by bar codes so that the filling of orders is more accurate and quicker and deliveries can be scheduled automatically. This eliminates errors, it saves us time and money, and above all it upgrades our level of customer service. If we make it easier for our customers, we make it easier for ourselves.

I worry about cash flow, labor, backlogs, cost of insurance, and all sorts of other things. But when I get up in the morning, I can't be paranoid that people are after me. People measure success very differently. My success has come from my ability to enable others -- the people who work for me and with me -- and to understand that change is constant. In order to be at the top of your game, you have to be able to adapt to change. The only reason I'm a success is I empower those around me to meet our clients' expectations and to make them understand that it's part of their dream also.

Starting off in a man's world, what central lesson have these remarkable women learned on their way to success beyond not paying attention to the common wisdom? "There are ways to play the game within the rules, but still find ways to win," says Linda Alvarado. "I think it was the way I was raised, my father raised me always telling me that if you set your mind to do something then there's nothing you can't do," says Mercedes LaPorta. "If you put everything you have into it, you're going to succeed. "And I've always carried that with me. My dad passed away a few years ago, but all my life he was my inspiration." Copyright (c) 2007 Hector V. Barreto 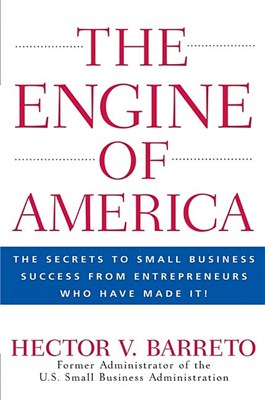 The Engine of America