Excerpt from What's Stopping You?

The following excerpt is the beginning of Chapter Three from the book What's Stopping You? : Shatter the 9 Most Common Myths Keeping You from Starting Your Own Business by Duane Ireland and Bruce R. Barringer. The following excerpt is the beginning of Chapter Three from the book What's Stopping You?: Shatter the 9 Most Common Myths Keeping You from Starting Your Own Business by Duane Ireland and Bruce R. Barringer. The June '08 issue of Publisher's Weekly states:

This book is refreshingly pragmatic while still being encouraging; it addresses the obstacles at each stage of entrepreneurship, including overcoming psychological barriers to quitting a day job, identifying and developing the right idea, financing and running effective public relations and marketing campaigns on shoestring budgets. Simultaneously upbeat and instructive, this book offers the aspiring business owner a practical push toward taking the entrepreneurial plunge.

The book is nine chapters long, with each chapter exposing one of the "9 most common myths" and revealing its correspong truth. The myth of Chapter 3 is that "it takes a lot of money to start a business."
C H A P T E R 3

Myth No. 3: It Takes a Lot of Money to Start a Business

Truth No. 3: It Might Not Cost as Much as You Think

How much do you think it costs to start a business? If you're thinking about a biotechnology, semiconductor, or medical product firm, you'd probably say a lot, and you'd be right. But how much do you think it costs to start an average business, like the privately owned businesses you deal with every day? And where do you think the majority of the start-up capital for these businesses comes from? According to the Wells Fargo/Gallup Small Business Index, the average small business is started for about $10,000, with the majority of the money coming from the owners' personal savings.[1] If this figure strikes you as low, you're in good company; it strikes most people as low. That's because when most people think of businesses, they think of the types of businesses that they interact with the most frequently, like grocery stores, restaurants, gas stations, and large retail stores. These types of business do take a lot of money to start and run. But chances are if you start a business, it won't be like these businesses--at least initially. It will be more like the businesses highlighted so far in this book. Most of these businesses didn't take a tremendous amount of money to start. Even aggressive growth firms, in most cases, don't take an arm and a leg to get started. Each year Inc. magazine compiles a list of the 5,000 fastest-growing privately owned firms in the United States. In 2006, the medium amount it took to start one of the businesses on the list was $75,000.[2] That means that half of them were started for less than $75,000. And these firms cover a wide swath of businesses, from building contractors to advertising agencies to retail stores. There is somewhat of a catch, however, involved with starting a business with limited funds. The catch is that most people simply don't have any experience or insight when it comes to determining how much it will cost to start a business, how to economize on start-up expenses, or how to raise money if needed. These are topics that there is no reason to think about until you start seriously thinking about starting a business. To provide insight regarding these issues and to further dispel the myth that it takes a lot of money to start a business, this chapter is divided into three sections. The first section provides insights into how to think about money as it relates to starting a business. The second section focuses on the techniques that enable business owners to minimize the costs associated with starting a business. The third section focuses on the choices that small business owners have for raising start-up funds if needed.
Insights Into How to Think About Money as It Relates to Starting a Business
For most people, the topic that consumes the majority of their thinking as it relates to money and starting a specific business is "How much money will it take to get the business off the ground?" While this question makes perfect sense, there is no concrete answer. The same exact business might cost one person $10,000 to start and another person $25,000--trust us, this isn't an exaggeration. The amount needed typically depends on how a person thinks about money as it relates to starting a business, how frugal a person is, and how resourceful a person is in gaining access to money and other resources. While money is obviously needed to start even the most basic business, many of the observations that successful business owners make about money are surprising. While you'd think money would be held in high esteem, many business owners discount the importance of having plentiful funds as a key to new business success. Instead, they tend to see the absence of money as a motivator for developing qualities such as resourcefulness, creativity, focus, frugality, and drive. The following are three insights about the role of money in the start-up process. As you read through each insight, think carefully about how each topic relates to your own attitudes about money. One of the reasons that many businesses are started for as little money as they are is that people adjust their attitudes about money as they become more acquainted with the start-up process. Now let's look at three insights regarding the role of money in the start-up process.
Skimpy Finances Can Be a Blessing Rather Than a Curse
The first insight regarding money and the start-up process is that there is a silver lining to having limited start-up funds. Many successful business owners, when they reflect back on their start-up years, feel that having limited funds forced them to focus, become self-reliant, and develop a mindset of frugality--qualities that have served them well as they've grown their firms. The importance of focus is affirmed by Caterina Fake, cofounder of Flickr, the popular photo-sharing Web site, which was started in 2002. In reflecting back on the role of money in the early days of her firm, Fake said:

The money was scarce, but I'm a big believer that constraints inspire creativity. The less money you have, the fewer people and resources you have, the more creative you have to become. I think that had a lot to do with why we were able to iterate and innovate so fast.[3]

Flickr's first product was a multiplayer online game called Game Neverending. At one point mid-way through the development of the game, the programmers, on a lark, added an instant messenger application to the game's environment, which allowed users to form communities to share photos. Surprisingly, the photo-sharing feature quickly passed the game itself in terms of popularity. As the photo-sharing feature continued to gain momentum, the game itself was dropped because the company couldn't afford to work on both projects simultaneously. Flickr, as a photo-sharing Web site, became extremely popular and was acquired by Yahoo! in 2005 for somewhere between 20 and 30 million dollars. Ironically, it was the lack of money, rather than the abundance of it, that caused the founders of Flickr to drop the game and focus on the photo-sharing site, a decision that turned out to be very profitable for the company. In regard to developing a culture of self-reliance, having limited start-up funds often instills discipline in a firm and forces the founders to substitute ingenuity and hard work for financial resources. An example of how this played out in one firm is provided by Doris Christopher, the founder of The Pampered Chef. Christopher started The Pampered Chef in 1980 and ran the company out of her home well beyond its start-up years. Explaining how having limited start-up funds helped set her on a lifelong track of financial discipline, Christopher wrote:

With a bankroll of only $3,000 to start my business, I didn't have any choice; I had to watch my overhead. It taught me discipline, which I have been mindful of throughout my business career.[4] 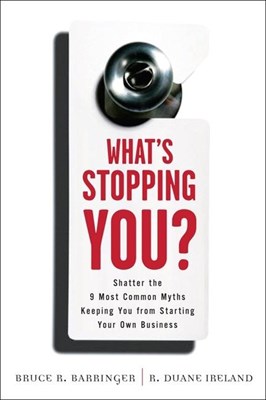 What's Stopping You?: Shatter the 9 Most Common Myths Keeping You from Starting Your Own Business